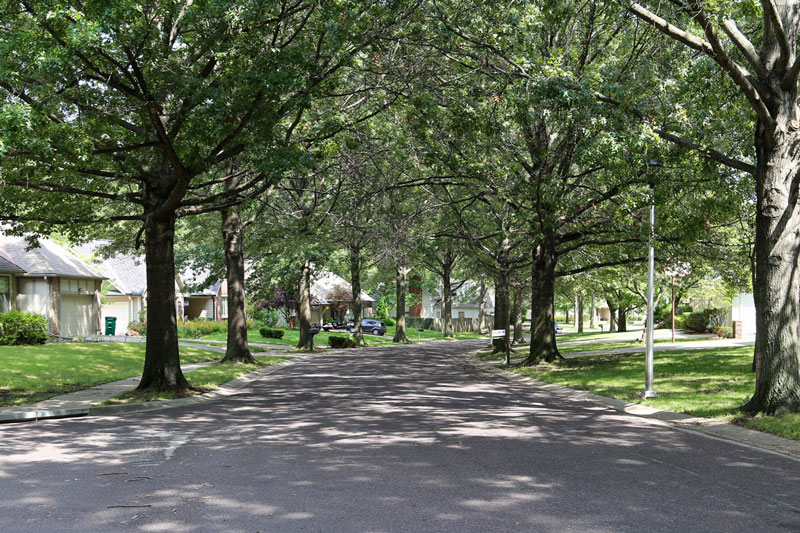 An Overland Park committee named a section of 101st Street the first-ever honoree of the Canopy Tree Street Award. Photo via city of Overland Park website.

The city of Overland Park Legacy of Greenery committee created the Canopy Street of Excellence award — and named its first-ever honoree recently.

Residents on 101st Street from Hemlock Street to Hardy Drive, part of the Pinehurst Estates subdivision, won the canopy street award this year. Canopy streets are defined, per the city’s website, as those with “continuously spaced trees near the street, with overarching limbs that are usually touching, creating a canopy.”

A nomination form for the 2022 award will be uploaded online here at a future date.

Last week, Rep. Sharice Davids of Kansas District 3 toured Dentec Safety Specialists in Lenexa, a manufacturer that used federal funding to pivot their business from construction materials to needed medical supplies during the pandemic, according to a press release.

Davids and Dentec Chief Executive Officer Claudio Dente highlighted the company’s reusable respirators — a product recognized by the U.S. Food and Drug Administration — as a “critical” innovation for healthcare workers.

Dentec received $1.4 million in state and federal funding to manufacture personal protective equipment, thanks in part to funding secured through the CARES Act.