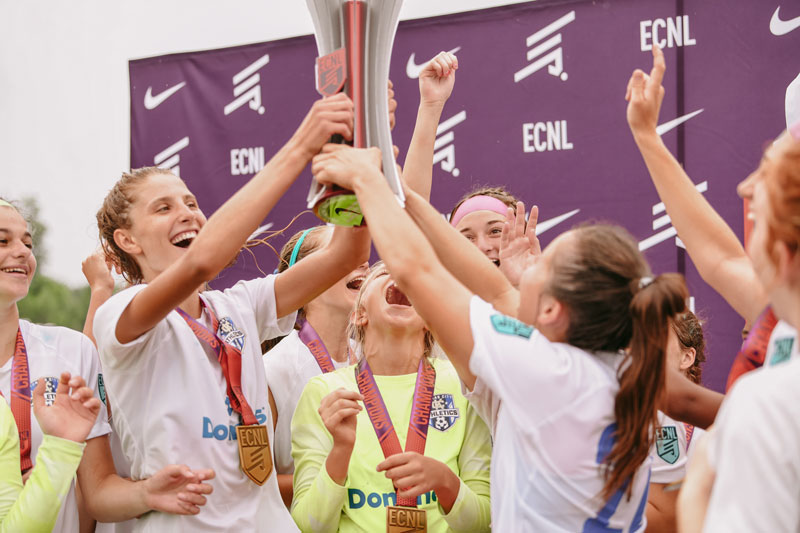 The Kansas City Athletics Under 15 girls’ soccer team won the Elite Clubs National League championship Monday morning — and some local players had a key role in securing the title.

The Athletics trailed the San Diego Surf by a goal with just 10 minutes of regulation time left when Aniston Cabantac, a freshman from St. Thomas Aquinas High School, scored the Athletics’ first goal and tied the game.

Mary Long, a Mission Hills resident and Shawnee Mission East freshman, scored what ended up being the winning goal by launching a header that found the back of the net with just five minutes left to play.

Coach Vasil Ristov said the win still felt surreal when he woke up Tuesday morning. It’s just the club’s third year in the league, but Ristov said the Athletics are making a name for themselves.

In order to compete in the championship game, the Kansas City team won a semi-final game against New York’s World Class FC team. The regulation period of the game ended in a tie of 1 to 1, and Kansas City won in a penalty kick shootout 4 to 3.

The new season for the Kansas City Athletics Soccer Club — which has ECNL boys and girls teams, pre-competitive teams for younger children, and camps and clinics — begins on Aug. 2. The girls ECNL Under 15 team will have a few weeks off to enjoy the summer, but Ristov said the club wants more of its teams to compete in the playoffs next year.

“For us, just because we won, it doesn’t mean we’re satisfied,” Ristov said. “If anything, we’re more hungry.”

Editor’s Note: A previous version of this story incorrectly stated which player scored the first goal of the second half, tying the game.