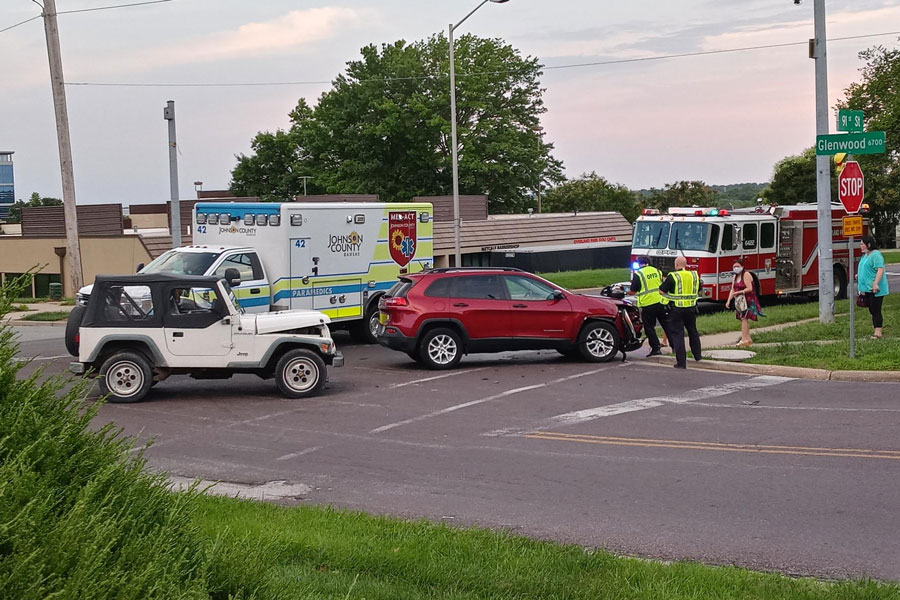 The aftermath of a wreck Wednesday evening at 91st and Glenwood in Overland Park. One vehicle going north on Glenwood entered the intersection, according to police, and hit the second vehicle traveling west on 91st. The city says it is days away from installing new "high profile" stop signs with flashing LED lights at all four approaches at the intersection. Image submitted by reader.

It marks at least the 11th crash that has occurred at that intersection since October 2020, when the city first deactivated traffic signals there, and the fifth wreck since the start of 2021.

Wednesday’s incident came just as the city is preparing to install new stop signs with flashing LED lights at 91st and Glenwood as a response to the spate of crashes there over the past year.

City Traffic Engineer Brian Shields told the Shawnee Mission Post Thursday that they expect the final parts of those stop signs — the LED lights — to be shoped by the end of this week and the signs to be installed “in the next few days” after that.

In an emailed statement, Overland Park Police Public Information Officer John Lacy said a vehicle going northbound on Glenwood came to a complete stop before entering the intersection, striking another vehicle which was traveling westbound on 91st Street.

The driver of the first vehicle was issued a citation for failing to yield, according to Lacy.

Neither driver was injured in the incident.

The growing number of wrecks at that intersection has become a sore point for some neighboring residents who opposed the traffic lights’ removal last fall.

They say without lights to slow traffic on 91st Street, it is dangerous for pedestrians to cross the road at Glenwood. They also say the spate of wrecks since the lights’ deactivation suggest the city moved too quickly in removing them.

Prompted by readers’ suggestions, the issue came up at a public forum Wednesday night for the three candidates vying for an Overland Park City Council seat in Ward 2, which covers the 91st and Glenwood area.

The city announced last month it would install the “high-profile” stop signs with flashing LED lights at the intersection as a response to the string of accidents.

Currently, there are regular stop signs at both approaches along Glenwood but no stop signs on 91st Street, meaning vehicles on 91st have the right-of-way to go through the intersection without stopping.

The city plans to add the new stop signs with flashing lights at all four approaches at the intersection, making it a four-way stop.

Why the lights were removed

Last fall, city staff recommended removing traffic signals at Glenwood and at another intersection nearby at Lamar, in part, because there wasn’t enough traffic along that stretch of 91st to justify them.

There had been a total of eight accidents at the Glenwood intersection in the three years prior to the lights’ removal.

In a release last month announcing the new stop signs, Shields said that the city had identified a “variety of issues” that had contributed to some of the crashes at the intersection — including an ice patch and a student driver.

“Over two million vehicles have successfully passed through this intersection since the signal was deactivated, not counting the ten drivers that caused crashes,” Shields said in the release. “Although circumstances for several crashes can be explained, we’re taking a holistic approach to ensure the safety of all drivers.”