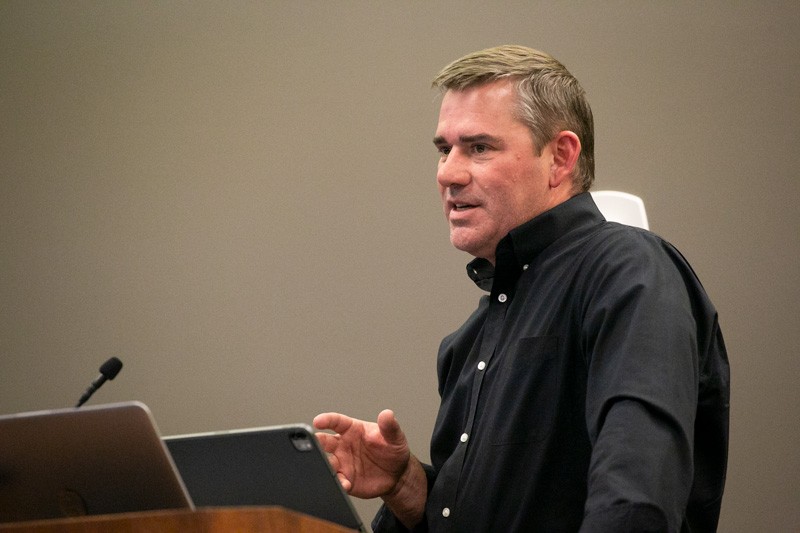 Kevin Tubbesing (above), a Shawnee developer, is planning to build 14 single-family homes on about 6 acres at 6001 Maurer Road, near the southeast corner of Johnson Drive and Maurer. A neighboring homeowner is concerned the project will increase flooding and erosion issues along the creek running through his property. File photo.

After lengthy deliberation over a neighbor’s concerns with water runoff, the Shawnee City Council this week unanimously agreed to advance plans for a single-family residential project in the central part of the city.

Kevin Tubbesing, a Shawnee developer, is planning to build 14 single-family homes on about 6 acres at 6001 Maurer Road, near the southeast corner of Johnson Drive and Maurer. His project, dubbed The Grange, required rezoning the site from agricultural to planned unit development mixed residential.

Tubbesing said he plans to leave as much as 40% of the site undeveloped with open green space. But Dan Anderson, who owns 5 acres along Johnson Drive just to the northeast of the project area, said the creek running through his property already has flooding and erosion issues.

In a presentation to the city council, Anderson shared his concerns that The Grange project will exacerbate stormwater runoff problems and disturb the wildlife in the area.

“My concern, of course, is that any additional water running down there is going to cause even more problems, washing my land away, and where it runs to, it runs into this beautiful lake right across the street, multimillion-dollar houses, and eventually into Lake Quivira [further to the north],” Anderson said.

Preliminary plans for developments in Shawnee are only required to provide comprehensive stormwater analysis and mitigation solutions as part of a final development plan, according to city staff.

After considering that fact, city leaders said they were assured that any problems will get addressed in the final development planning stage at a later date.

“In terms of post- versus pre-development, the intent is that this development will not have an impact on that creek, and we will make sure that that’s true through our final development plan review,” said Doug Allmon, community development director for the city.

Tubbesing said he’s prepared to add a stormwater collector (such as a pond, if necessary), but he would prefer to keep as much native vegetation as possible on the site.

A recording of the meeting is available below and on the city’s website. Discussion begins at 30:53.