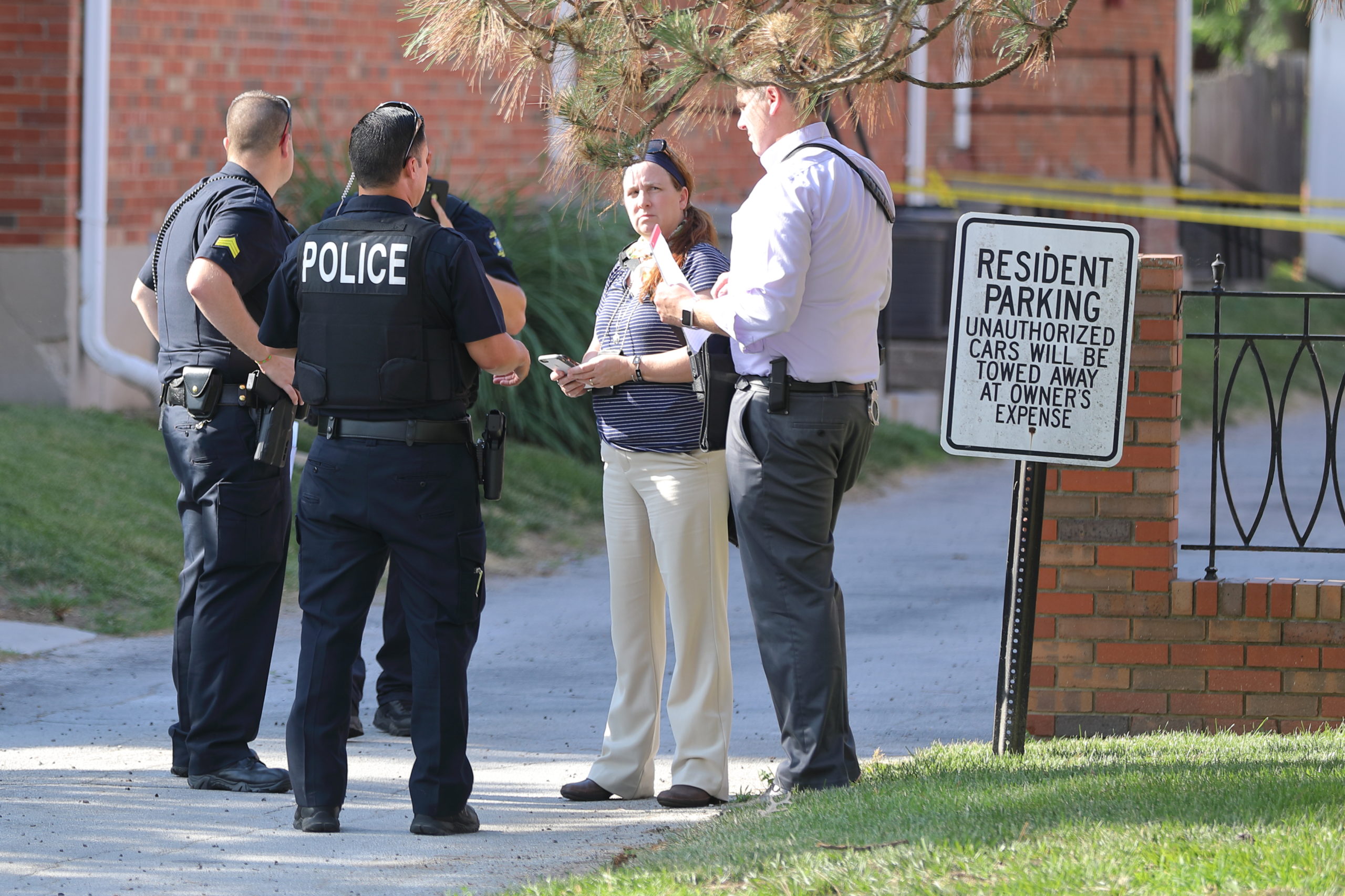 Overland Park residents will get a chance on Sept. 13 to weigh in at a public hearing on the city's budget, which proposes raising the mill levy rate in order to pay for adding mental health responders and crisis training to the police force, in addition to mental health services for first responders themselves. Above, Overland Park Police on a call last year. File photo.

The Overland Park city budget plan for next year moved forward this week, although some city councilmembers expressed unease about a variety of things, including spending for mental health, plans for affordable housing, response to climate change and the proposed one mill tax rate increase.

Councilmembers discussed the budget Monday night ahead of their regular meeting and then approved setting two public hearings for Sept. 13 at City Hall.

Consideration for final adoption will be on Sept. 20.

Some changes from original budget presentation

The budget includes some changes from when City Manager Bill Ebel first proposed it.

A mid-June county estimate of assessed property values in the city shows a 2.9% increase, which is a bit higher than the 2.7% originally estimated.

If that increase stays constant into October, when the final valuations are determined, the city would get $100,000 more for its general fund and $5,000 more for the stormwater utility fund, Ebel told councilmembers.

Also recently added to the budget during committee meetings is a $100,000-a-year grant for restoring the former Strang Depot in downtown Overland Park. The grant to the Overland Park Historical Society would begin in 2022 and last for five years.

Councilmembers also proposed covering a $445,000 increase in the cost of redeveloping Strang Park, bringing the total of that project to $3.76 million.

When finished, the park at 88th Street and Farley Street will have an “all-inclusive” playground accommodating children with special needs. The additional money would come from the city’s share of sales tax designated to build a new county courthouse.

Although the vote to set public hearings was unanimous, some councilmembers expressed concerns about various aspects of the plan, especially the proposed mill levy increase.

The prospective hike would raise the city’s property tax rate by one mill to 14.582 mills overall.

For a homeowner with an average appraised value of $350,000, annual property taxes would increase about by about $40, according to the city.

Those were some of the recommendations from a special task force convened after Sheila Albers, whose son John was killed by an Overland Park police officer during a welfare check, asked for more attention to be placed on police training for mental health calls.

On Monday, Councilmember Faris Farassati, who is one of four candidates vying for mayor in the Aug. 3 primary, said his vote to advance the budget plan was merely in favor of a public hearing in which residents can have input.

Otherwise, he said, he has opposed to the proposed mill levy increase.

He questioned whether there would be any guarantees that the revenues from the increased tax rate would stay strictly in public safety. He also asked Ebel whether the added revenue could be used with more flexibility in public safety and whether the recommendations of the Mental Health Task Force have to be fully funded.

Councilmember Fred Spears also mentioned the task force spending. He didn’t directly question it, but noted that one of his constituents was skeptical, calling it “a complete waste of time and waste of resources.”

“In the pandemic, we realized mental health was a much bigger deal,” he said. “I believe the community is seeing that and can appreciate what we’re trying to do.”

Ebel said the task force funds raised by the mill levy increase would go towards positions that will be added at the direction of the city council. Unless those positions are removed, the funding would go to them, he said.

Meanwhile, Councilmember Logan Heley said he would like to see more attention to affordable housing, climate change measures and staffing, which he said seems lean at the moment.

“We need to put our money where our mouth is,” on such things as the parks and forestry departments, Heley said.

“People love our mature tree canopy, but it does come at a maintenance cost,” he said, adding that the city should be making “wiser, more realistic and bolder decisions on climate action.

Heley and others also expressed interest in the next round of federal pandemic money coming to the city through the American Rescue Plan.

Overland Park has already received $9 million and has made its first allocation: a $500,000 grant to Visit OP to promote tourism to the city.

Ebel said the city can expect a total of about $18 million in American Rescue Plan funds over the next two years.

The council’s Finance Administration and Economic Development committee will consider putting $3 million of that toward hotels and tourism, and may also look into covering shortfalls in the convention center budget, he said.

The convention center had a $2.6 million deficit last year and projects up to another $1.5 million shortfall this year.

Federal grants usually come with restrictions on how the money is spent, so ideas will need to be researched, Ebel said.

The proposed budget plans for more money to be collected through both the mill levy increase and the increase in property values.

The mill increase would put the city’s tax rate at 14.582 mills, which exceeds the state’s “revenue neutral” calculated rate of 13.174 mills. But even without the mill increase, rising property values would still result in more funds coming into the city coffers, Ebel said.

Because of a new state law, Overland Park must have two public hearings on Sept. 13.

One will address the intent to exceed the state-mandated revenue neutral rate, and the other will be more generally about the proposed budget.