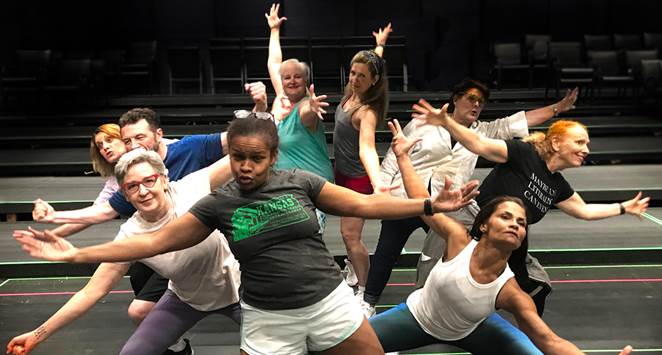 When a group of folks (all over the age of 60) decide to audition for a dance squad that will perform in front of 20,000 spectators at a major league basketball half-time show… and they get CHOSEN… and THEN they learn the dance they will be performing is (wait for it)… HIP-HOP… well, let your mind wander! Thus, is the story of nine determined dreamers who end up bustin’ a move center court and learning a little something along the way!

“Half Time – Gotta Dance,” (playing on the TIP stage July 16-24, 2021) is based on the motion picture “Gotta Dance” which tells the story of the real-life New Jersey NETSationals – a group of 12 women and one man who actually DO end up as a troupe of hip-hop dancers all over the age of 60!

In this musicalized version of the story, there are little twists and turns (of course!) with the (senior) characters in the stage story. A grandmother wrestles with the conundrum of a certain boy (and his ho-hum attitude) in her granddaughter’s life, another wants to be on the squad to increase her sales of Mary Kay makeup, one uses the group as impetus to get out of the basement, and then there’s the kindergarten teacher whose love of hip-hip music wows her teammates and coaches alike! Let’s just say grandma’s got her groove goin’ on! 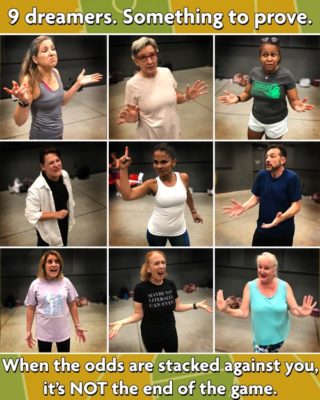 Naturally, there’s always gotta be a nay-sayer, and in this case, it’s the head of the communications department at the corporate offices. She decides that instead of actually letting the group perform the dance they’ve been working so hard on, they should just do something funny… like ride around on scooters in some ridiculous formations… slowly… cause, well, isn’t that what old people do? REALLY!? As you can imagine, none of the squad takes very well to THAT nonsense, and short of a mutiny and a good whack with a cane, let’s just say that hip-hoppin’ wins the day!

This show is unique – in ways other than the obvious! It isn’t often that most ALL of the principal characters are of a “certain age.” It’s exciting, really! As a former dancer myself, I have first-hand knowledge of what it feels like to get to a stage in life that you feel like your dancing days are behind you. Creaky knees, sore ankles, and feet that require a good amount of time in the mornings to wake up and get back to walking! Let’s just say I’m pretty envious of ALL the dancers in this show… and pretty proud of them too! You’ve all heard it before; “age is just a number.” I gotta say, see this show, and you’ll jump on THAT train for sure! Be ready to be impressed and shout “atta’ girl (or boy),” at the top of your lungs. These folks truly got it goin’ on!

Honestly, this show could NOT be more delightful. Witty, charming, clever… and a cast of characters that can deliver a joke, sing a great song, and shake their groove things in a way that will make you wanna jump up and shake yours too! Oh… and there is a Chinese buffet, a swing dance club, and a hot disco woven into the story. Frankly, what’s not to like!?

I certainly hope you’ve been able to see every production in our 2021 season, but… if you can only see one show on our stage this summer, make it this one. You’ll have a great time, and if you walk away with anything, I hope it is a clear understanding that age really IS just a number.

Join us…we’ll be glad to see you!