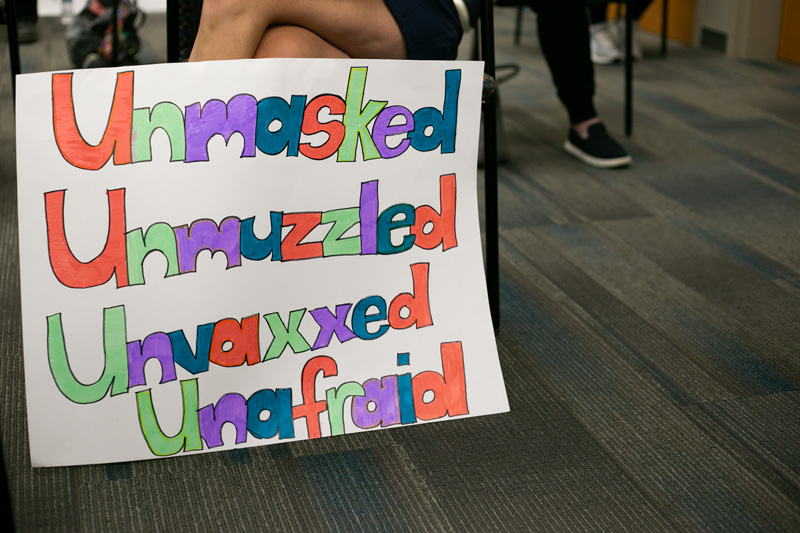 The USD 232 Board of Education on Monday unanimously agreed to let face masks be optional this school year. The board's decision followed comments from half a dozen parents who pushed back against a draft policy that indicated the district may exclude non-vaccinated students from certain school activities. File photo.

USD 232 in De Soto will allow face masks to be optional inside school buildings for the upcoming school year.

The USD 232 Board of Education on Monday unanimously agreed to allow the policy, citing the district’s ability to review the policy and make changes in case of an uptick in COVID-19 cases.

The board’s decision came after public input from about half a dozen people, including some parents who pushed back against a draft version of the policy that would have “strongly recommended” masks.

USD 232’s decision follows those of other school districts around Kansas, many of which won’t require face masks this fall, including Olathe and Blue Valley, who are also making masks optional.

The only major Johnson County public school district that has yet to formalize a mask policy for the upcoming school year is Shawnee Mission, though the board is slated to hold its regular meeting later this month.

What about unvaccinated students?

After some discussion over whether unvaccinated children could be excluded from school activities, the school board decided to hash that out during the Aug. 5 meeting.

The board will also talk through the district’s Communicable Disease Mitigation Guidelines.

The state of Kansas requires certain vaccinations of students unless they have an exemption, district staff noted. However, the COVID-19 vaccine is still voluntary, and families can voluntarily share the vaccination status of their students.

A draft version of the district’s policy, which the board will discuss in further detail next month, read, “As with all communicable diseases, vaccination information may be used when making exclusion decisions.”

Parents also pushed back against the draft policy that indicated children who are considered contagious with a communicable disease will be excluded from school.

Citing a survival rate of 99% among COVID-19 patients, these parents said they were concerned that restrictive policies could result in bullying among students who have policed each other in unhealthy ways.

“You guys need to start listening to parents; we never had a problem until this year,” said Emily Carpenter, who is running for a seat on the USD 232 board this November. “You guys overreached your boundary this  year. You stick to education. I’ll stick to health of my child, and that includes mental health, too. You guys have ruined the mental health of our children.”

Board President Danielle Heikes took issue with some of the parents’ complaints and accusations of a lack of transparency, saying that state and local governing bodies have placed the onus on local school boards to decide their own disease mitigation protocols and whether to require masks on the tail end of the global COVID-19 pandemic.

“I think that the difficult part is that… the guidance has been confusing,” Heikes said. “It’s been difficult to really, as a board, make decisions that we feel are in the best interests of the students, because the guidance has changed, it’s been confusing, it’s been difficult to interpret. At this point in time, there is no county mandate, there is no state mandate.”