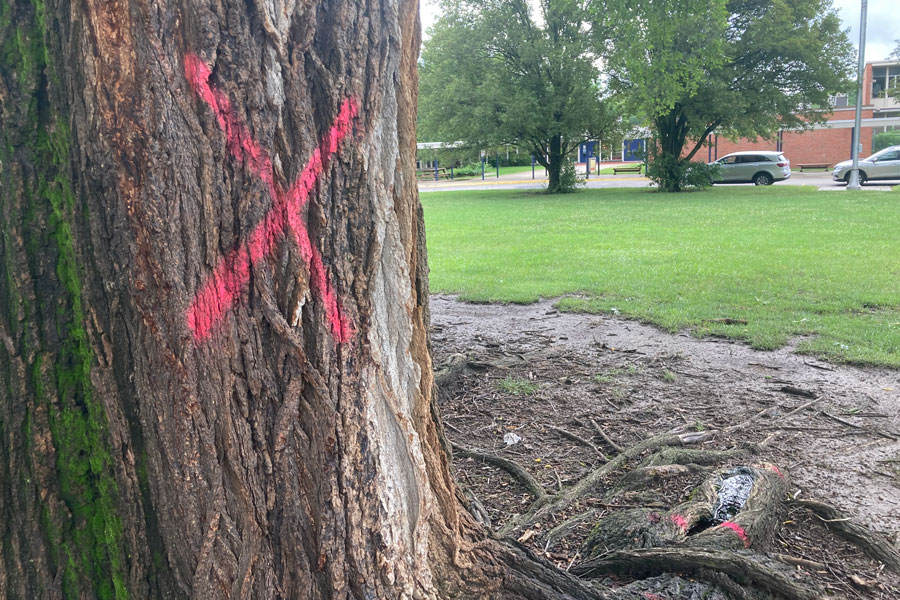 Three trees in front of Horizon Academy in Roeland Park are scheduled for removal this week, city staff says. The Bishop Miege property owner chose a plan that removed the three mature trees in connection to a sidewalk replacement project the city is taking on instead of having the sidewalk on the school's property.

Three mature trees in Roeland Park are scheduled to be torn down this week, in connection with improvements being done along Reinhardt Drive, but some residents are protesting the move.

The city is redoing the sidewalk along Reinhardt Drive at the same time as the street is being redone.

As part of the work, three large shade trees in front of Horizon Academy, 4901 Reinhardt Drive, will be uprooted.

Nearby Bishop Miege High School owns the land in front of Horizon and has opted to remove trees, though the city says it did present alternatives to run a new sidewalk around the trees and keep them in place.

Nearby residents like Maggie Docking, who has lived across the street from Horizon for 11 years, aren’t happy about the pending tree removal.

While Docking said she received formal notification from the city about the Reinhardt Drive project, she said she found out about the tree removal when red X’s appeared on the trees last month.

“It just bothers me to tear down huge, established trees for no good reason other than annoyance,” Docking said.

The city presented alternative layouts for the sidewalk replacement that would have avoided removing the trees, Winn said.

Still, the city council ultimately approved the Reinhard improvement plan in anticipation that the trees could be removed.

Horizon Academy is an independent private school focused on teaching kids with learning disabilities like dyslexia and dysgraphia and rents its building from Bishop Miege.

Randy Salisbury, Bishop Miege principal, said in a statement to the Shawnee Mission Post that the school strives to be a good neighbor.

The school sought advice from an arborist to make the decision, and Salisbury says the school believes removing the trees is in the best interest of the community.

“An arborist from KC Arborists assessed the health of the trees and determined the root system of the trees had deteriorated and is getting worse over time,” Salisbury’s statement reads. “The risk of personal injury and property damage due to falling limbs is a concern and the exposed roots also pose a safety issue as they are a tripping hazard.
Roeland Park will replace the trees with a standard 1.5-inch caliper tree at minimum, Winn said, but the city is looking into the availability and pricing for larger caliper trees.

The Reinhardt Drive project features reconstruction from Pawnee Drive to W. 50th Street, as well as sidewalk and curb and gutter replacement.