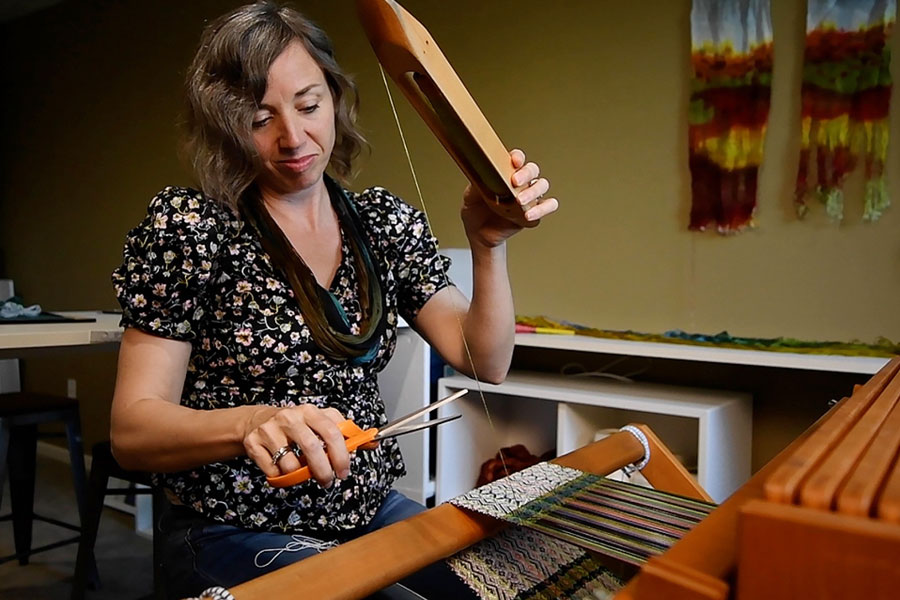 During the pandemic, Shawnee artist Debbie Barrett-Jones, above, used weaving to process her own grief and anxiety. Now, she's found a way to share the healing benefits of her craft with children and parents at Children's Mercy hospital in Kansas City, Mo. Photo credit Julie Denesha/KCUR 89.3.

And when life gets stressful, as it did during the pandemic, her craft becomes therapy.

“It’s like a heartbeat almost, you know,” Barrett-Jones says, as she moves a wooden shuttle back and forth. “There’s different sounds that are going on. But I think all the sounds together are very soothing to me.”

Barrett-Jones says weaving for her is like a kind of meditation.

“When I’m able to sit at my loom, I use my feet and my arms and it’s the sound of the loom and it’s also my body being involved,” she says. “And just right to left, right to left, thread by thread, beat by beat of the loom, I’m starting to see the creation of a piece of fabric.”

Barrett-Jones is a graduate student at the University of Kansas, and she teaches Introduction to Weaving to undergraduates.

When her class switched to remote learning because of the pandemic, she had to figure out how to teach without the large floor looms in her classroom. She settled on using the school’s simplified frame looms — ones that look almost like empty picture frames.

Barrett-Jones lost her uncle to COVID-19 in January. She found herself working through the loss with a project on the simple frame loom.

“For weeks, I had not really been able to have time to process that grief, and it’s a complicated grief,” she says. “I had both anger and also just sadness.”

Barrett-Jones says working on the small loom on such a personal project freed her weaving practice.

“It really forced me to work small for the first time and be really present in a different way at the loom,” Barrett-Jones says. “You can focus just on your fingers working through with weaving and the pattern. I didn’t think about the actual outcome of being perfect. It was all about the process of weaving and thinking about this loss.”

Inspired by the experience, Barrett-Jones designed a loom of her own — with the help of the Visual Art Studio Technologies Lab at KU. This new loom was portable and easy to use. She thought it could be helpful to others.

“I started envisioning these kits that would have these little laser-cut frame looms and yarn and instructions that would be provided for hospitals,” she says.

This summer, with funding from an ArtsKC Inspiration Grant, Barrett-Jones is building 200 wooden looms to donate to young patients and their parents at Children’s Mercy Kansas City. She calls the project Healing with Weaving. Each loom takes 20 minutes to make, and the kits will include supplies to complete two weaving projects.

Rosenboom says it’s important for young patients to have a way to work through emotions that can be difficult to express in words. He says simple gifts like the ones Barrett-Jones is providing can change a patient’s experience in the hospital.

“Sometimes, you know, your kid is going to be in surgery and you’re going to be waiting a couple hours, “ Rosenboom says. “You just need something to get your mind off of all of the worry and all of the things that you’re thinking through. And so something as simple as maybe a crossword or an activity kit is a big deal.”

Back in Barrett-Jones’ studio, a pattern is taking shape in the fabric she’s weaving.

“When I just sit at my loom, it’s just like all of a sudden the wave of peace starts coming and it’s incredibly healing and therapeutic,” Barrett-Jones says. “I’m so just thankful that I have this tool. It’s a gift. It gives to me so much.”

This month Debbie Barrett-Jones’ fiber work is part of a group show “At the Threshold” by KU Graduate Arts Association at the Leedy-Voulkos Art Center, 2012 Baltimore Ave, Kansas City, Missouri.