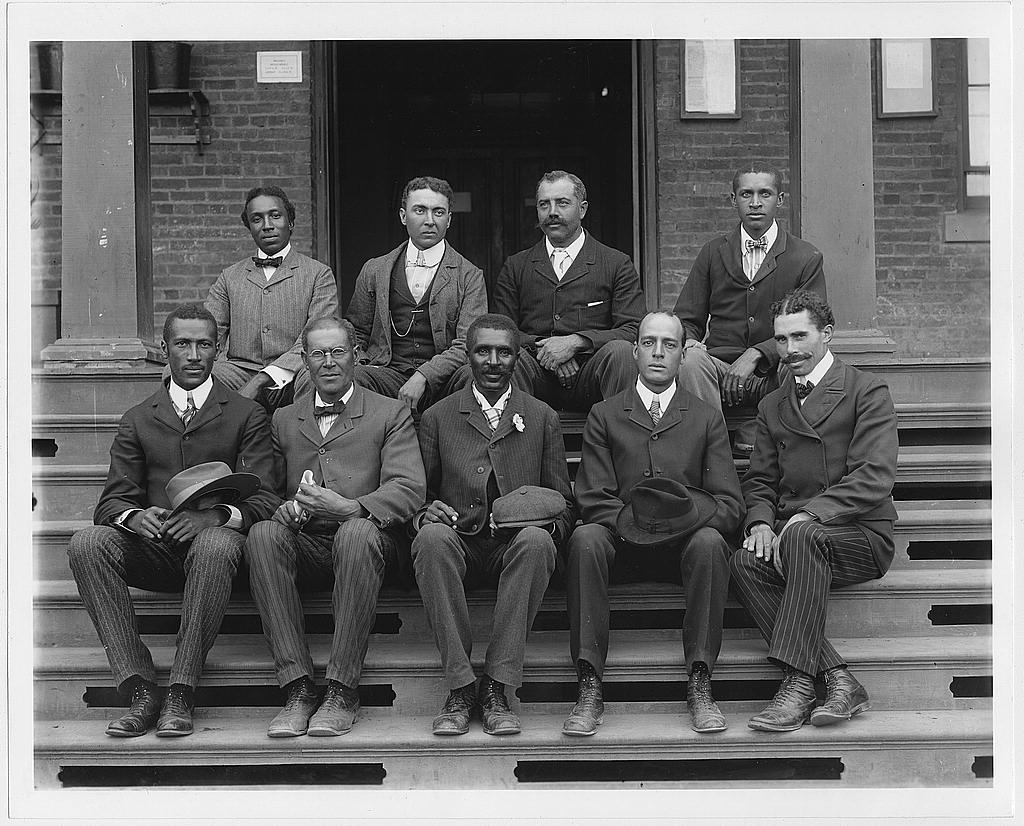 George Washington Carver is a familiar American hero – a man who refused to be limited by his circumstances and rose to become a genius in his field and an example for generations to come. Most people know Carver as an inventor who discovered hundreds of uses for the peanut, but few are aware of his rigorous, cross-country educational journey. Even fewer know that his journey brought him to Johnson County, Kan. for a brief time.

Carver was born during the Civil War in Diamond, Mo. to a woman named Mary, enslaved by Moses and Susan Carver. The exact date of George Washington Carver’s birth is unknown, but it occurred sometime before Missouri abolished slavery in January 1865. His father, who was enslaved on a neighboring farm, died before he was born. As an infant, Carver and his mother were kidnapped by Bushwhackers, and he was returned to his enslavers as an orphan.

Young George Washington Carver grew up on the white Carvers’ farm, where he received a basic education at home. His aptitude for learning and great interest in the world around him was apparent from an early age. Later, he moved to Neosho, Mo. to pursue formal education at a school for African American students. Teachers quickly realized that Carver’s knowledge was already advanced beyond the simple coursework offered there.

At the young age of 13, Carver set off in search of more challenging academic pursuits in Fort Scott, Kan. There he attended a more rigorous African American school. In March of 1879, after a year of study, Carver witnessed the lynching of a fellow African American man, Bill Howard, that left him greatly unsettled. Carver subsequently fled Fort Scott for Olathe, some 80 miles to the north.

In Olathe, Carver recounted that he “did cooking, washing, ironing, cleaned carpets, and did all kinds of work for a living.” Before long, he became acquainted with Ben and Lucy Seymour, a formerly enslaved couple, whose home was located on Cherry Street between Poplar and Santa Fe. Ben was a well digger. Lucy owned a small laundry business. The Seymours gave Carver a job, took him in as a son, and helped him attend Old Rock School, located near Loula and Water Street. Carver started school in the middle of the semester in 1879 and completed the fourth grade there.

In 1880, the African American population in Olathe numbered around 200, with a total of 900 black residents county-wide. Most of these individuals lived northwest of the business district in an area called Fairview, west of the Atchison, Topeka, and Santa Fe Railroad tracks between Santa Fe and Catalpa (Whitney) Street. There were two African American churches in Olathe at the time Carver resided there, and he was active in the Methodist church, teaching Sunday School.

Continuing His Pursuit of Knowledge

In 1884, Carver enrolled in a small business college in Kansas City, Mo. During his short stay in the city, he worked as a stenographer at Union Depot, the main train station located in the West Bottoms. Soon his academic accomplishments earned him acceptance to Highland Presbyterian College in Highland, Kan.

When he arrived at Presbyterian College, the president discovered that Carver was Black and promptly rejected him. Unable to attend college as planned, Carver homesteaded near Beelerville, Kan. There he farmed, gaining hands-on experience in agriculture. His love of horticulture was present even then. A local newspaper reported that he had over 500 plant specimens, as well as a large geological collection. Carver also cultivated a love of art during his time in Beelerville, sketching many of the native plants he encountered, including many from Johnson County.

In 1890, Carver left Kansas to once again attempt to pursue higher education. He was accepted into Simpson College in Iowa to study art and piano, and then transferred to Iowa State University to study agriculture. Carver earned bachelors and master’s degrees from Iowa State University and later became the first African American on faculty at the school.

Carver’s career took him to the Tuskegee Institute, where Booker T. Washington asked him to lead the agriculture department. Carver remained there for almost 50 years, teaching, experimenting, and discovering ways to help poor Southern farmers make a better living from the earth. He studied and promoted the importance of crop rotation, and invented ways to use surplus crops (including the peanut and sweet potato) for profit, among a variety of other achievements. His career brought him academic acclaim. The business world also respected him, with business leaders seeking his advice. Carver, a formerly enslaved man, even met with three U.S. presidents (Theodore Roosevelt, Calvin Coolidge, and Franklin Roosevelt).

George Washington Carver died in 1943. His legacy shows the importance of education, the value of hard work, and the boundless possibilities that come with living a life focused on others. His epitaph reads, “A life that stood out as a gospel of self-forgetting service. He could have added fortune to fame but caring for neither he found happiness and honor in being helpful to the world.”