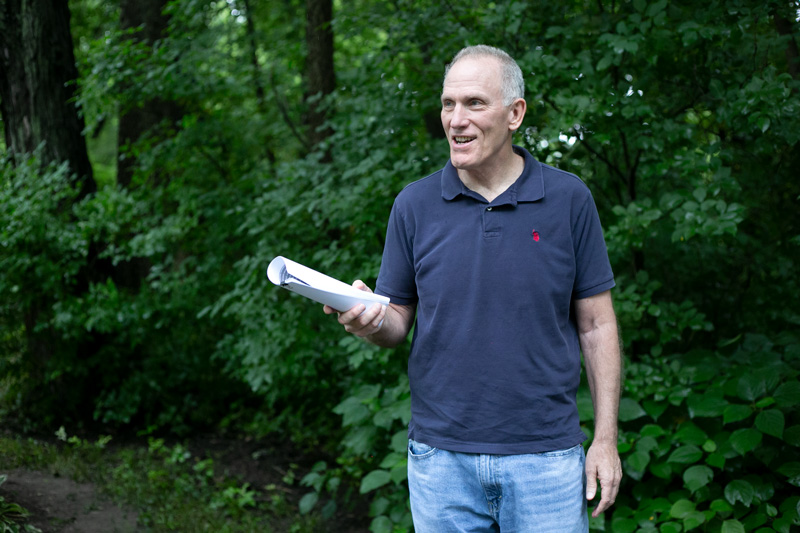 Jim Magaziner, who moved to Shawnee from Pennsylvania two years ago, wants his new home town to incorporate into its city code design concepts that, in general, push developers to dedicate more of their project sties to natural, open space. Photo credit Leah Wankum.

His group, Shawnee Open Space, urges city leaders to consider implementing ordinances that support “Conservation Subdivision,” a design concept that, in general, advocates for developers to dedicate part of their project sites — up to 50% of more in some cases — to natural, open space.

The result would preserve the natural beauty of Shawnee’s countryside, protect wildlife and allow space for a comprehensive trail system throughout the city’s neighborhoods, Magaziner says.

The main point of “Conservation Subdivision” is to shrink the size of each plat in a residential subdivision, and dedicate the extra space to preserve the natural landscape and allow contiguous green spaces throughout the city.

The older parts of Shawnee, mostly on the eastern side of the city, are already mostly developed, so much of Magaziner’s attention is turned toward western Shawnee.

Since moving to the city two years ago, he has enjoyed the natural beauty of the area, particularly the quiet stretch of Monticello Road near 71st Street and the natural hill at Shawnee Mission Parkway and Woodland Drive.

Excavation of the hill began about a year ago, and redevelopment of Monticello Road kicked off earlier this year. So, Magaziner decided around that time that he needed to do something.

“The goal of Shawnee SOS is to basically protect habitat, woodlands, green spaces, the beauty of Shawnee, but recognizing that if there has to be development, then maybe there should be a compromise,” Magaziner said. “It’s the beauty, it’s the wildlife, it’s the biodiversity, and the ability to have a diverse set of trails and open space for the people of Shawnee.”

Magaziner says he understands that more development will grow Shawnee’s tax base, which in turn, is necessary to support public services like police and fire. But he ultimately hopes to see conservation baked into city code that could prevent what he calls “overdevelopment” of Shawnee.

Such city codes could look like those in Lower Merion, Penn., a township in the Philadelphia suburbs where Magaziner lived before moving to Shawnee. Lower Merion has policies that dedicate more land for open space.

“There’s going to be development; a lot of it is already baked in,” he said. “You’re never going to stop development. This is just a compromise to try to save some open space.”

Julie Breithaupt, communications manager of the city of Shawnee, said Magaziner’s ideas for Shawnee to have “Conservation Subdivision” are possible, but they require several steps for the city to take.

“The Governing Body would need to approve a number of changes to our Comprehensive Plan including updates to zoning requirements, the land use guide, development guidelines and more,” Breithaupt said in an email. “We are in the middle of reworking our Comprehensive Plan, called Achieve Shawnee, and continue to encourage any and all residents to take part in our public input sessions.”

Breithaupt noted that the next Achieve Shawnee Public Open House is August 25, from 6 to 8 p.m., at the Shawnee Civic Centre, 13817 Johnson Drive. More details are available here.

Magaziner said he hopes some of his concepts could make their way into Shawnee’s comprehensive plan, which is in the process of getting updated. He believes his ideas can apply to other cities in Johnson County as well.

Magaziner presented the “Conservation Subdivision” concept to the Shawnee City Council on June 14. A recording of the presentation can be viewed below. Magaziner’s presentation begins at about the 1 hour, 15 minute mark.