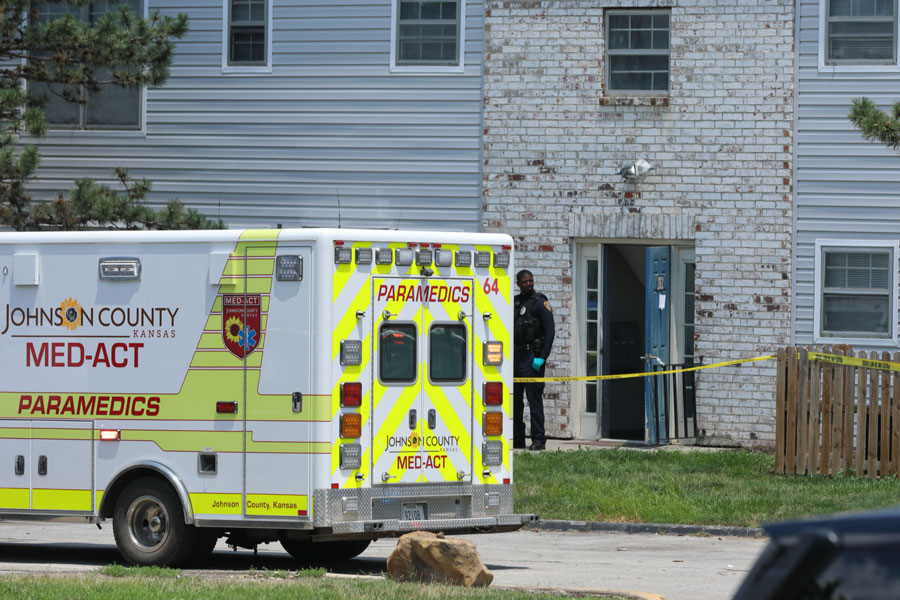 A Lenexa Police officer along with an ambulance from Johnson County Med-Act outside an apartment complex where investigators say a deadly shooting occurred Monday afternoon. Photo credit Mike Frizzell.

UPDATE: Lenexa police have identified the victim of the shooting as Adam L. Carroll, 20, of Lenexa.

“Preliminary investigation indicates that one of the two individuals inside the apartment was handling a firearm when he negligently discharged it, striking the victim,” wrote Lenexa police spokesman Danny Chavez. “The individual who discharged the firearm immediately called 911 and attempted life saving measures. This individual has cooperated in the investigation.”

Officers were called to an apartment in the Lenexa Crossing Apartment Homes, 12600 block of West 97th Terrace, about 1:15 p.m. Monday.

That complex is located just of Interstate 35, a few blocks west of Oak Park Mall.

Master Police Officer Danny Chavez said police are working to determine what led up to the shooting.

“We believe the involved individuals were known to each other,” Chavez said in an emailed response to questions. “At this time, I understand the person who shot is the one who called 911 and did stay on scene to speak with officers.”

Recorded radio traffic states that the 911 caller reported “that his weapon fired,” wounding another man inside the apartment.