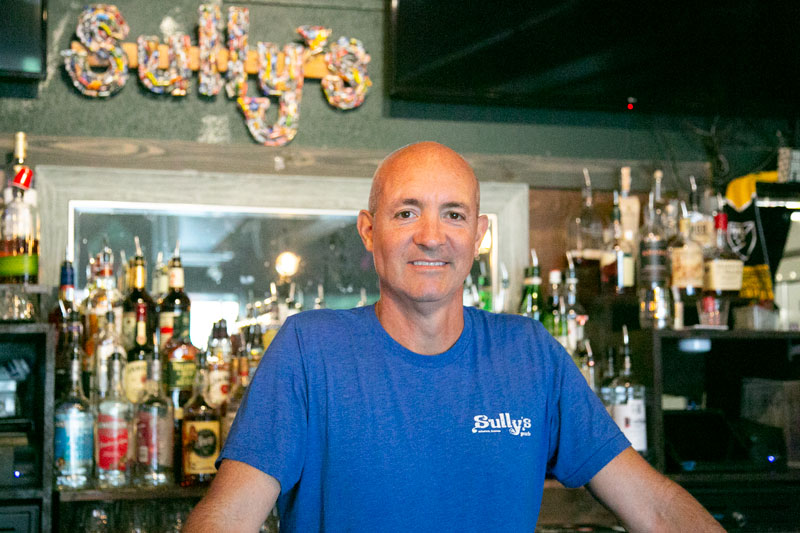 Sully's Pub in downtown Mission is gearing up for its 10th anniversary later this week — and owner Matt Jones, above, says he is excited about a new partnership with the bar's soon-to-be neighbor, Wing Stand by Jefferson's. Photo credit Juliana Garcia.

When Matt Jones opened Sully’s Pub in downtown Mission in 2011, it was a fun side project.

But the place’s popularity and customer base grew rapidly, Jones says, in part due to a lack of another local sports bars in the area.

Now, after surviving COVID-19 shutdowns over the past year, this Johnson Drive mainstay will be celebrating its 10-year anniversary, from July 21 to July 24.

Jones said he and his staff appreciate their customers more than anything for helping Sully’s stay afloat during the pandemic.

“The second we could open the doors, even with masks, we were busy because everybody wanted to support us — which was great,” Jones told the Shawnee Mission Post.

But that isn’t the only thing Jones says he’s excited about.

Jones says Sully’s will be partnering with its soon-to-be neighbor WingStand by Jefferson’s, a spin-off of the popular Lawrence restaurant, which is currently renovating the former Pride Cleaners right next door.

For Jones, it’s a natural fit. He says Sully’s doesn’t offer a ton of food options because its main purpose is being a bar. But he hopes the budding partnership with WingStand can change that.

Customers at Sully’s Pub will be able to scan a code located on their table, order from WingStand and have food delivered right to their table, Jones said.

WingStand customers will be able to grab to-go drinks from Sully’s Pub, or stop in for a drink and dine at the bar.

“Neither of us have ever done something like this, but [WingStand by Jefferson’s] will be the yin to our yang, because if everybody in here now has full food, our business will go up,” Jones said.

WingStand could open as soon as this fall, though no final plans have been formally announced.