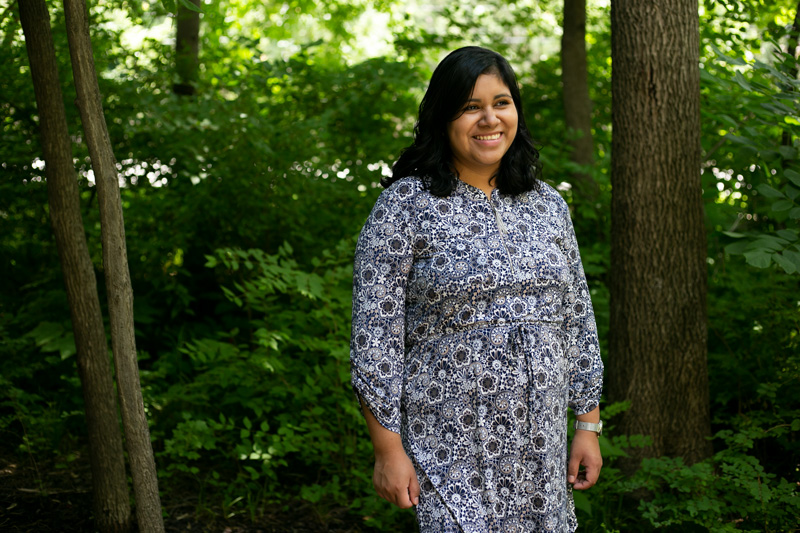 As the new director of community planning at United Community Services of Johnson County, Erika García Reyes knows exactly what she wants to do.

With her early life experiences as an undocumented immigrant and a teen mother with little income, she understands those challenges and wants to help struggling families in Johnson County. She recently moved back to Johnson County because she could finally afford to buy a home here.

Born in Veracruz, Mexico, she immigrated to the United States with her family when she was 10 years old. Many of her family have also settled in Wyandotte and Johnson counties. A 2010 SM Northwest grad, she earned bachelor’s and master’s degrees in public administration from the University of Kansas.

Before taking on her new role at United Community Services of Johnson County, García Reyes worked in workforce development and local government services for the Mid-America Regional Council. Her professional background is primarily in data analysis and project management.

Among her responsibilities at UCS, she leads the Johnson County Continuum of Care on Homelessness. She’s also working on a larger initiative to increase access to COVID-19 testing and vaccinations for minority communities.

Outside of spending time with family, she enjoys walking around her neighborhood, and creating scavenger hunts, teachable moments and fun activities for her bilingual four children. They live in Shawnee.

One of the goals that I had with this position is to be a better advocate for those that cannot speak for themselves or that are not invited to the tables that we get invited to.

So literally, the first five to six years of my life in Johnson County, we moved every year to a new apartment complex, just because we couldn’t afford where we were at.

And I think that the breaking factor was also, at one point — and the longer that I’m in this role, I think the longer that I take ownership of this — my entire family came to the U.S. as undocumented. And at one point, we had literally just got approved into an apartment complex and had literally not even a month living there. Then property management changed and they somehow realized that we were undocumented. They gave us an eviction notice of one month.

My family tried to find other ways through their social capital and through their networks to be able to find and hold and be approved to another apartment complex within two weeks. We had to pack up everything, and we were extremely exhausted at the fact that we had the means to pay for the apartment, but because of our status, we were being evicted.

At that point, I was still a teenager. My daughter was probably 3 to 4 months old. I was in the foster care system, and I didn’t know how to advocate for my family or for myself; I was still underage.

And I told myself that I didn’t want anyone else to ever go through that experience. I felt extremely horrible for my parents because they didn’t know how to advocate for themselves. And when you’re undocumented, you’re also afraid to speak up.

At some point, I also made it a personal goal to eventually be able to become a homeowner so that we didn’t have to continue to change housing.

Because every single time we moved, it also meant that I had to change the school where I was going. Actually, I would say that not only did I have to continue to build relationships every single time, but it almost felt like even in the schools when I did change, there wasn’t a person that I could trust or that I saw as a mentor.

Eventually, when I reached high school, I did express that to my mom, and we found work-arounds, and I was able to have the support of other family members to be able to stay at one high school. Otherwise it would have meant that I needed to attend at least three different high schools.

As a teen mom, I think that that brought up a lot of challenges for me personally, but a lot of inspiration as well.

I had already experienced and noticed how my mom struggled raising me as a single mom, and so I already had in my mind, even as I was pregnant, that I was not going to drop out of high school and that I was going to try to get a degree as far out as I needed to. And I found mentors along the way that have continued to inspire me and support me.

I would say that, also, the biggest thing about the importance of living in Johnson County was that I could definitely see myself in this community longer term, because it was a community where I wanted my kids to grow up.

But I also continued to notice how there were barriers for individuals like myself to continue to be residents in the county.

Later, as I was going through college and all of the other things, I was trying to be a full-time mom, a full-time student, working part-time and also being a volunteer. So there was no additional flexibility for me to find another job to be able to present the income guidelines that you’re required to have to basically maintain an apartment.

I ended up thinking that maybe I could save up just enough to be able to find at least a place where I could own. So I moved to the historic Northeast in Kansas City, Missouri. I never wanted to leave Johnson County because that was the place where I grew up.

And there, I experienced what a lot of minorities experience in a lower-income neighborhood, where it was almost uncomfortable and unsafe to walk around the neighborhood. Because there were literally dogs barking at you every single time, and just the streets were not clean at all.

The whole reason why I wanted to make sure that I came back was because of my kids. So when I was able to move back to the city of Shawnee, one of the biggest priorities for me as a mom and also as an individual was to have a neighborhood where I could walk and felt safe and comfortable.

We literally live on the corner of County Line. And every single time I drive down that road, I just laugh because it’s literally a road that divides us, but it is what’s allowing my children to have the access and support to eventually become successful human beings.

I know that there’s probably many more families that were like ourselves and that might be going through that same scenario at this time. I also know this whole sense of insecurity after there is an eviction. I have felt what it is to feel like you don’t have a house or a place where you could call home.

And while most of my portfolio builds on helping and assisting individuals, or creating resources, strengthening networks to support those who are experiencing homelessness, I feel strongly that we as a society are failing a lot of people in the Johnson County area.

We are seeing increased homelessness because we are not able to provide those supports that people need. And we have not been willing to really be true to ourselves in trying to care for those that need the assistance, or being able to give them a hand up to continue to provide and maintain the level of resources that they should have access to.

That’s why I’m here: Because I don’t want others to experience or face the same challenges that my family has had to face.