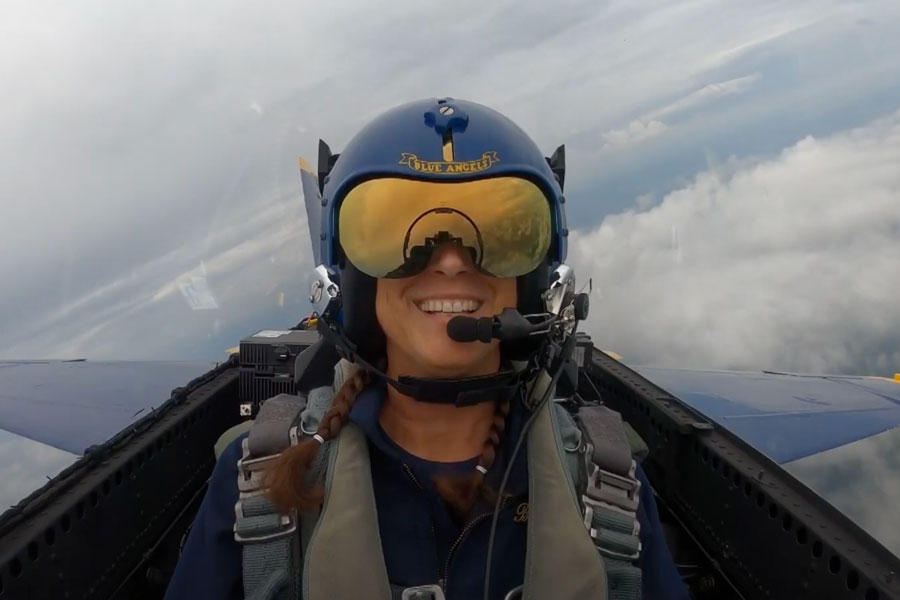 Shawnee Mission Superintendent Michelle Hubbard and two Shawnee Mission North students flew with the U.S. Navy Blue Angels this week. Hubbard said it was the "flight of a lifetime" and that she hopes all students get to achieve their dreams. Image via SMSD YouTube channel.

Accompanying Hubbard to the New Century AirCenter were Jalen Juan and Owen Dooley, a junior and senior in SM North’s Navy Junior Reserve Officers Training Corps, who were able to speak to pilots and see the jets up close before the superintendent went up in a F/A 18 Super Hornet, according to a district press release.

In a video posted to the district’s YouTube channel, Hubbard said while she was nervous, she knew the flight would be amazing — and it was.

“I don’t have a need for speed, so I was a little apprehensive,” Hubbard said, paraphrasing the famous line from the movie “Top Gun.”

She was sure to make an educational point, as well.

“This week, I had the privilege of being joined by two Shawnee Mission North students as I achieved a dream I never thought possible,” Hubbard said. “It’s my hope for every Shawnee Mission student that they get the chance to achieve their dreams.”

Hubbard and the students met pilot Lieutenant Julius Bratton prior to the flight and received some pre-flight training.

During the flight, Hubbard said they were able to achieve 6.8 Gs, a measure of the force of the jet’s acceleration. (As a reference, 1 G is the force we feel from gravity that keeps our feet planted on the earth. The force of 6 Gs is akin to what race car drivers feel when they go at top speeds.)

The barrel rolls and loops made in the sky this week also happened to kick off the beginning of Hubbard’s new job as SMSD superintendent.

SMSD’s video of the flight can be found below:

Unfortunately, if you want to see the Blue Angels yourself, the Kansas City Air Show says both Saturday and Sunday’s performances this Fourth of July weekend are already sold out.