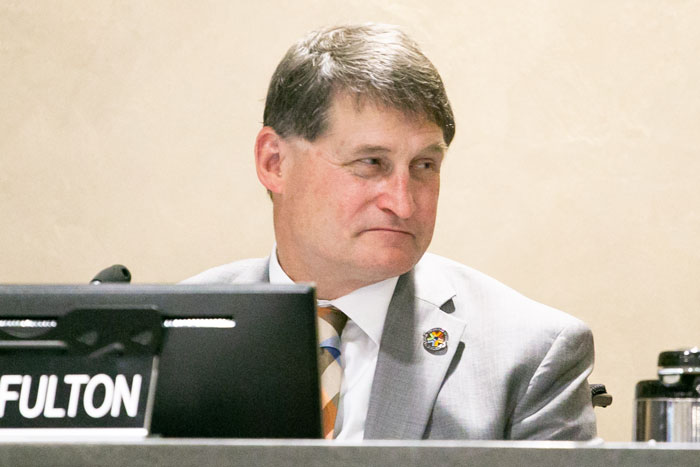 Mike Fulton officially stepped down as Shawnee Mission Superintendent on June 30, ending a three-year tenure. Fulton was credited by staff and school board members for repairing relationships in the district that had grown frayed under previous administrations, but he also came in for heavy criticism from some parents for his handling of learning and restrictions during the COVID-19 pandemic. File photo.

He came to Shawnee Mission in 2018 from Pattonville Public Schools outside St. Louis, where he had been named Missouri Superintendent of the Year in 2016. He replaced interim superintendent Kenny Southwick.

Fulton himself is being succeeded by Michelle Hubbard, who served most recently as SMSD’s Deputy Superintendent before formally taking over the district’s top job July 1.

At the start of his tenure, Fulton focused on building relationships with staff and school board members in a district that had grown increasingly frustrated with the decision making and lack of transparency in the final years of former superintendent Jim Hinson’s administration.

That effort was reflected in some of the messages included in a farewell video presented at Fulton’s final school board meeting on Monday, June 26.

“One of Dr. Fulton’s strengths is that he is warm and kind and genuine with every he interacts with. He meets people where they’re at,” Board President Heather Ousley said in the video.

Other staff members credited him with leading the district through crafting a new long-term strategic vision and reemphasizing diversity as the district continues to see an increase in the enrollment of students of color.

But Fulton also faced major challenges in his brief term as SMSD’s leader, none more daunting than the COVID-19 pandemic.

The pandemic disrupted public education throughout the 2020-21 school year, forcing students to learn at home for long stretches.

SMSD saw a major drop in enrollment as many parents decided to keep their kids at home or seek other educational options. Also, staff members quit or retired early in unprecedented numbers, making it hard for the district to fully staff schools for in-person learning at times.

The district’s COVID-19 policies — including its remote and hybrid learning plans and the requirement that masks be worn inside school buildings — also angered some parents, repeatedly prompting protests and emotional public comments at board meetings.

Fulton admits it was a challenging time.

“Given what we understood about the virus and dealing with a lot of unknowns at the time, I think we did the very best we could,” Fulton told Post Editor Kyle Palmer in an exclusive interview on Thursday, July 1, Fulton’s first day away from SMSD.

In that interview, Fulton reflected on his three years in the district, the challenges he faced during a sometimes-tumultuous era, the successes he believes he had and what he plans to do next professionally in education.

Watch the full interview embedded below or at the Shawnee Mission Post’s Facebook page. A transcript of questions complete with time stamps is below if you’d prefer to skip forward to a particular moment.