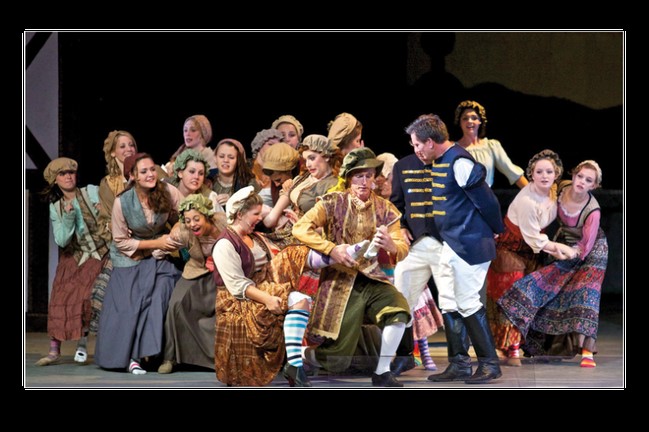 The ensemble from the TIP 2010 production of “Cinderella.”

Who hasn’t been there before? You’re stuck in a cottage cleaning ashes out of the fireplace, hounded day in and day out by your evil step mother and berated by your vapid, disengaged step sisters… and you find yourself chatting with the wildlife on your veranda and singing hopeful uplifting ditties to yourself while imagining ballgowns, glass slippers, and princes charming. Yea. You know. One of those kind of days!

Aww, you guessed it. “Cinderella!” The classic tale of an orphaned daughter forced into scullery maid-dom who (like most everyone, of course) gets to meet her Fairy Godmother and through the magic of brilliant orchestrations and a little behind the scenes magic, meets her Prince Charming and in the end, lives happily ever after. Naturally!

And so, it is with the latest adaptation of the Rodgers and Hammerstein classic ready to hit the Theatre in the Park stage Friday, July 2! Full of some of the most beloved early R&H tunes, audiences familiar with earlier incarnations won’t be disappointed as they sing along with “Impossible,” “In My Own Little Corner” and “Ten Minutes Ago.” This new version features a new hilarious and romantic libretto by Tony Award nominee Douglas Carter Beane and introduces a few new characters not heard from before!

If you’re NOT familiar… The story revolves around Cinderella (“Ella”, played by Tyler Harper) who is stuck with the mean wife (Madame, played by TIP alum Julie Fox) of her deceased father, and her two vapid and semi-delirious step sisters (Gabrielle, played by Merideth Hollan, and Charlotte, played by Charlotte Gilman), all of whom are obsessed with attending a ball thrown in honor of Prince Topher (Austin Skibblie). Toss in a political radical named Jean-Michel (Scott Kruse) with a not-so-secret attraction to Gabrielle (much to Madame’s distain), a Fairy Godmother (Jennifer Weiman), a semi-nefarious Lord Chancellor named Sebastian (Jack Kapple), some pumpkins, horses, wild life, a giant, a good number of peasants, and ladies and gentlemen of the court, and you’ve got a recipe for a family friendly tale of love at first sight!

The original Broadway production opened on March 3, 2013 and played 769 performances. The production was nominated for nine Tony Awards and won for Best Costume Design of a Musical, marking the sixth win for designer William Ivey Long, whose career has garnered an astonishing 17 nominations! Amazing!

So, if you’re in the mood for a good old-fashioned love story about a girl who can’t seem to keep her shoe on (a glass slipper tripper…) well, this one’s for you! “Cinderella” hits the stage July 2 and runs for 6 performances. (There will be no show on July 4.)

Join us! We’ll be glad to see you!