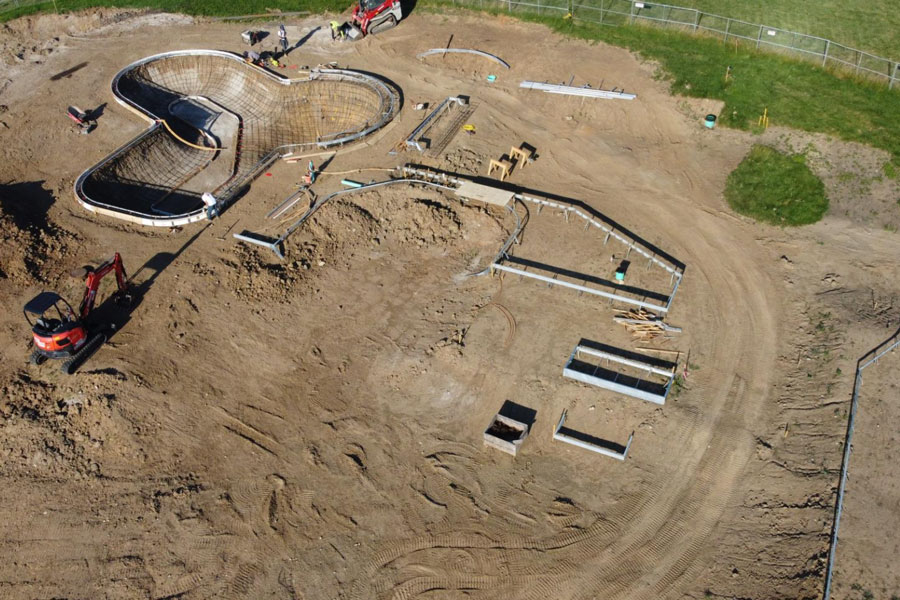 Prairie Village says it expects construction work replacing the old deteriorating skate park at Harmon Park to be completed in time for a mid-August reopening. Above, the outline of the main skating bowl can be seen at upper left. Image via City of Prairie Village website.

Right now, though, there’s a big hole in the ground next to Prairie Village City Hall.

Those passing by may have noticed: construction is underway at the site near 7710 Mission Road, a major step in the city’s years-long effort to spruce up Harmon Park around the city’s municipal campus.

The city anticipates the project to be completed and the skate park reopened by mid-August, according to the city’s website.

The popular skate park’s concrete had been deteriorating for years — and concrete replacement is just one of the aspects crews are currently working on.

Crews began placing metal railings and doing fine grading last week, the city of Prairie Village tweeted. The grading work will prepare crews to start the concrete pour, according to the tweet.

Construction of the new skate park is in full swing. Construction crews from Newline Skate Parks are in town and working hard. They are currently placing the metal railings and doing fine grading. This work is all in preparation for the start of the concrete pour. pic.twitter.com/WQu8vHFON7

“Newline Skate Parks construction crews showed up about one month ago and they have been very busy setting the bowl and rails for the new skate park,” the June 2021 project update reads on the city’s website.

The park is set to feature 10,000 square feet of skating area, as laid out in the final concept design on the city’s website:

Prairie Village closed the skate park on April 5 to begin demolition of the old concrete and to embark on the $700,000 improvement project.

A new skate park is one part of the larger project to revamp Harmon Park, aspects of which have been debated at City Hall for years. Some initial concepts presented in 2017 included adding a permanent amphitheater.

Earlier this year, the city council approved moving forward with plans to construct an all-inclusive playground just to the west of the new skate park. That project had been on hold after originally being budgeted for in 2018, at a projected cost of $575,000.

In addition to an improved skate park, the current project also includes the addition of a performance pad area that will play host to performances for the city’s annual Jazz Fest.