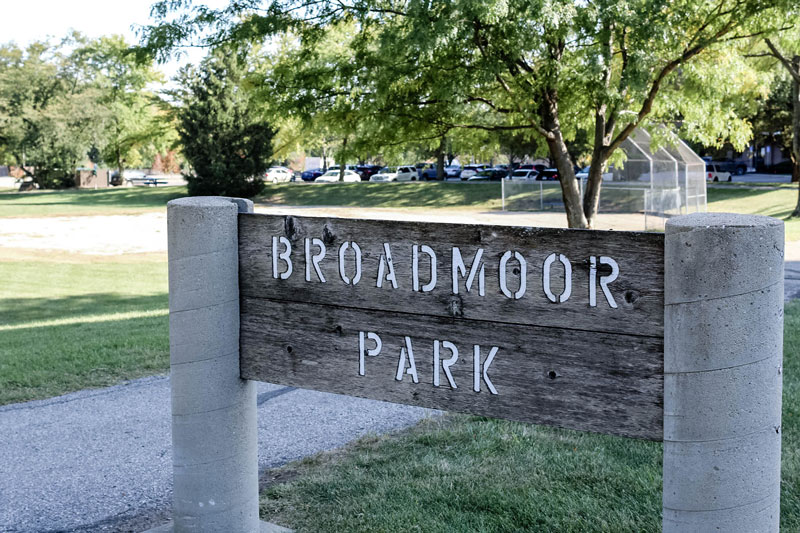 The city of Mission is in the middle of a conceptual redesign of Broadmoor Park, 5701 Broadmoor Street. Current site plans include a dog park, an amenity the city has been discussing for years. But some neighboring residents expressed opposition to the idea at a public meeting Tuesday. Photo via city of Mission Twitter.

The city of Mission is in the midst of a conceptual redesign for Broadmoor Park — and a one-acre dog park included in the plans is sparking debate.

At a public meeting Tuesday night about the park’s future, residents got into a tense back and forth about the proposed dog park, which is something the city and some residents have been working to bring to Mission for nearly seven years.

After an informal dog park on the grounds of Rushton Elementary was closed off earlier this year, attention turned to Broadmoor Park at 5701 Broadmoor Street, just off Johnson Drive.

At Tuesday’s meeting, some residents expressed concern about the proximity of a dog park near a playground with children, as well as worries about the need for maintenance, the potential for noise with increased activity, safety and the amount of land being dedicated to a dog park.

Other residents like Ken Lovern and his wife Jamie Ledbetter Lovern said a dog park “builds a lot of community.”

“It’s a great way to meet people because you start talking about each other’s dogs,” Ledbetter Lovern said. “It really does bring the community together.”

A dog park isn’t the only new item on the table for the redesign of Broadmoor Park.

City staff is working on a full-blown revamping of the park based on feedback from 2015 resident surveys that contributed to the city’s current master plan.

City Parks and Recreation Director Penn Almoney presented two options Tuesday — neither of which are finalized, and therefore are not available online at this time.

But both concepts Almoney unveiled include some configuration of the following amenities:

One resident said the concepts Almoney presented came across as more indicative of a Johnson County Park and Recreation District park, rather than a city park, and would therefore potentially attract people from outside the taxpaying area instead of from the surrounding neighborhood.

Councilmember Sollie Flora said the park is not just for those living near it, but “is a whole city amenity.”

Almoney said he appreciates residents providing feedback on the designs, and his sentiment was echoed by Councilmember Arcie Rothrock following the meeting.

Rothrock said all feedback helps her, and the rest of the city council, to make informed decisions.

Both Rothrock and Flora are running for mayor this year to take the place or Ron Appletoft, who is not seeking reelection.

Although the Broadmoor Park designs have yet to be finalized, a majority of the city council previously expressed support for a dog park during the June 23 budget work session.

Councilmembers Hillary Parker Thomas and Nick Schlossmacher brought forth a memo at that budget work session asking the council to consider slating roughly $100,000 for a dog park in the 2022 budget.

After Schlossmacher read a resident letter asking the city for a dog park, he and Thomas advocated for a commitment to fund the amenity before the governing body changes after the November general election. (The mayor’s office and four city council seats are on the ballot.)

“I think while we have an appetite in the community and on the council to get a dog park moving forward, I think we should do it,” Thomas said during the June 23 meeting. “I think it’s the responsible thing to do.”

Councilmembers Kristen Inman and Rothrock were in support of acting quickly to allocate funds even if construction would take more than a year to break ground, because the city “is as ready as it’s going to be.”

No councilmember spoke against a potential dog park at Broadmoor Park, but some, including Councilmember Debbie Kring, said they wanted more details about how a dog park would be maintained with the city’s limited parks and rec resources.

The city council did not take formal action on the item on June 23.

Tuesday evening’s meeting about Broadmoor Park was the first public meeting the city hosted about the park’s redesign.

Another meeting will be held at a later date but has not yet been scheduled.

Resident feedback will be reviewed for an updated presentation before the next meeting, city staff said.