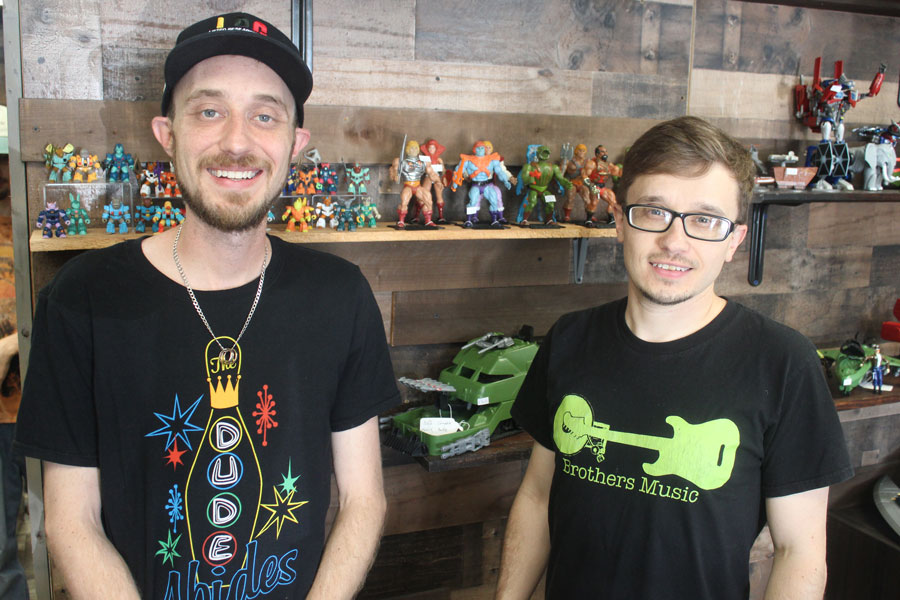 Kyle (left) and Cole Maggart opened Brothers Toys and Collectibles earlier this month on Johnson Drive in Mission. The shop sells new and vintage toys and is right next door to Brothers Music KC, the vinyl record store the Maggarts opened in 2015. Photo credit Kyle Palmer.

Kyle and Cole Maggart, the brothers behind Brothers Music KC, a vinyl record store on Johnson Drive in Mission, have a new venture: toys.

And their loyal customers won’t have to go very far.

Brothers Toys and Collectibles opened earlier this month at 5810 Johnson Drive, right next door to the Maggarts’ record store, which relocated from another spot just up the road more than a year ago.

Kyle Maggart sees the new toy store as an attraction for “everyone from 4 year-olds to 45- and 50-year olds.”

Brothers will sell new toys, like Marvel, Star Wars and Transformers action figures and accessories, as well as vintage items from the 1980s and 1990s, when the Maggarts themselves were kids.

“We have brand new stuff for kids, things that are current that they won’t be able to find at Walmart,” Kyle said. “And we’ll have stuff for older collectors, who may want stuff they had as a child or items to round out a collection.”

A year in the works

The Maggarts said they had plans to launch the toy shop last year, soon after moving their record store into its current location.

Kyle had already begun purchasing new toys for an initial stock, but the COVID-19 pandemic hit. That inventory sat in a storage unit for more than a year.

Ironically, though, Kyle says the past year of lockdowns and stay-at-home orders may have helped their business model in the long run.

“I think stuck at home, people got into their attics or garages and found their old toys,” he said. “Half decided they didn’t want them and looked for places to sell them. The other half thought, ‘This is pretty cool, maybe I’ll try to find more of these.'”

Likewise, sales of new toys ballooned during the pandemic.

On a recent weekday, Kyle sat at Brothers Toys’ counter, in front of racks of vintage Masters of the Universe figurines and GI Joe vehicles, taking enquiries over the phone from sellers wanting to offload their toys.

Another customer came in with an old toy still in the box, asking what he could get for it.

“We were a little anxious launching this after the last year, but so far the reception has been well-received, from adults and kids alike,” Cole said.

Mission residents and Johnson Drive shoppers may already know of the Maggarts through their record store, Brothers Music KC, which opened in its original location in 2015.

They’ve built up a loyal following selling new and used records, along with guitars and accessories.

Kyle admits that Cole, who plays guitar, is the musician, and he is the collector.

“My mom spoiled me when I was kid,” he said. “She basically made sure I got everything I asked for, and I took really good care of my toys.”

When he grew up, he sold his entire collection, something he says he has always kind of regretted.

Now, he’s getting to make up for it in a way.

Brothers Toys and Collectibles is open from noon to 7 p.m. Wednesday through Saturday, and noon to 5 p.m. on Sundays. It’s closed Monday and Tuesday.