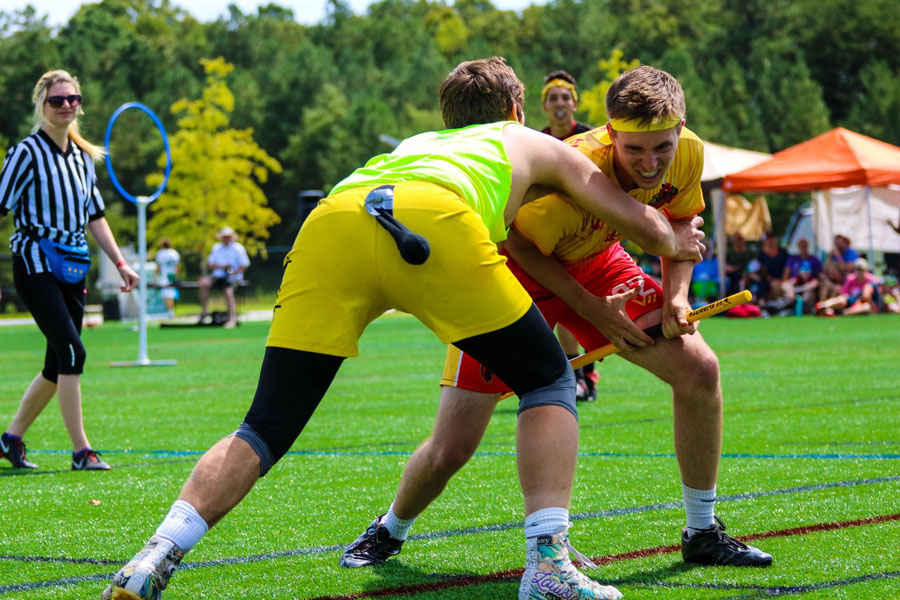 Major League Quidditch includes 15 teams in the U.S. and Canada. The Kansas City Stampede squad will play a Texas-based team three times this Saturday at Highland View Park in Overland Park. Above, a quidditch player tries to get the "snitch," attached to a player wearing yellow shorts. Image courtesy Major League Quidditch.

The lifting of local pandemic restrictions has felt a bit like magic for many Johnson Countians. Possibly never more than this Saturday.

That’s because Major League Quidditch, or MLQ, is returning to Johnson County for the first time in nearly two years.

The real life professional sport based on the fictional game featured in the Harry Potter book series will be a chance for Johnson Countians to get out and observe an activity gaining popularity across the U.S.

The first game will begin at 4 p.m. and will be open to the public. You can purchase tickets through a ‘pay what you will’ system here.

MLQ’s rules, originally adapted from the sport played by the students at Hogwarts, incorporate a mix of elements from other real-life sports, including basketball, rugby and dodgeball. (Alas, there’s no flying around on broomsticks.)

“’Chasers’ on each team try to throw a ball [or quaffle, in Quidditch-speak], which is actually a volleyball, through any one of three hoops at either end of the pitch. While avoiding dodge balls that are thrown by ‘beaters’ on either team,” Jack McGovern with MLQ explained.

The teams try to score points by getting the ball in the opposing team’s hoop.

“The last part of the game, and maybe the most memorable for people who’ve seen or read the Harry Potter books and movies, is the ‘snitch’, which is a person with a ball and sock hanging out the back of their shorts,” McGovern said.

A designated player on each team known as the “seeker” tries to catch the “snitch.”

In the books, the “snitch” is not a person but a small, fast-flying golden ball, and Harry Potter is known as one of Hogwarts’ best seekers.

After 20 minutes of game time in MLQ, which ever team has more points or has caught the “snitch” wins.

MLQ describes itself as “a competitive, full-contact, co-ed league with franchises across the United States.”

The Kansas City Stampede is one of 15 teams, including some in the U.S. and Canada.

The sport originated in the northeast U.S. before expanding to Kansas and other states and regions.

There are currently three other registered (non-MLQ) teams in Kansas — one high school team in Salina and two college teams at the University of Kansas and Wichita State.

The sport is growing quickly, organizers say, and they urge anyone interested in starting a team to check out the resources from U.S. Quidditch here.

“We want Quidditch to reach everyone, sports fans, Harry Potter fans, kids, adults, everyone,” McGovern said. “We want people in the cities that our franchises are located in to connect with their teams. To associate Quidditch with summer and going to Quidditch matches as a summer weekend activity.”

The entire 2020 MLQ season was canceled due to the COVID-19 pandemic, and the league says it has now developed a 35-page manual of health safety guidelines.

Teams cannot participate in MLQ in 2021 unless all members of their squad are fully vaccinated and case rates in their home county or city are below a certain threshold.

The Kansas City Stampede are scheduled to play four series of games this season, including another home series versus a the New Orleans Curse on Saturday, Aug. 7.