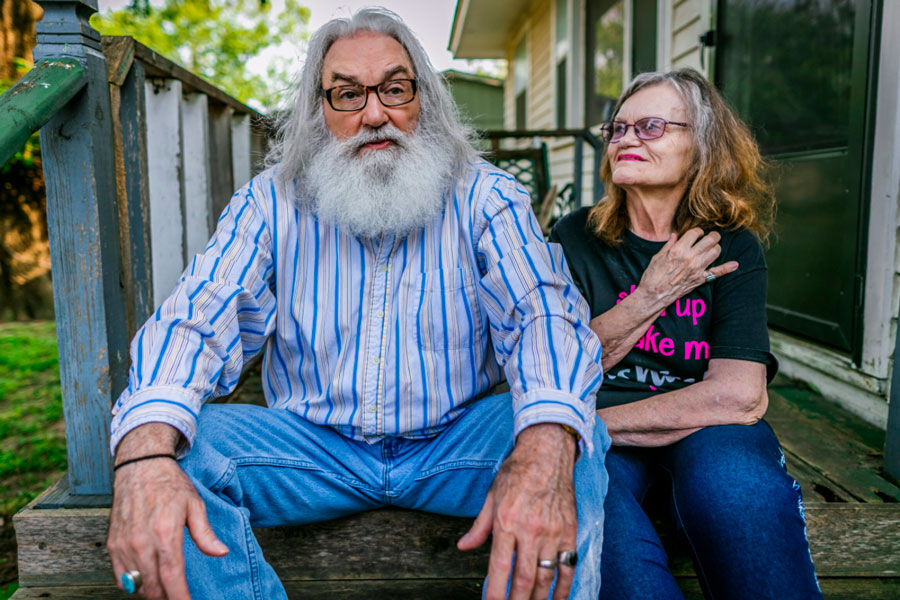 Michael McCloud, who now lives in Wichita with Patricia Stebbins, says his depression is gone now that Gov. Laura Kelly has granted his request for clemency. The 67-year-old faced the possibility of returning to prison for another 21 years for a string of armed robberies he committed in Johnson County in the early 1990s and had already served 27 years in prison before being released in 2018. Photo credit Fernando Salazar/ACLU of Kansas.

Michael McCloud was overwhelmed with joy when he learned he wouldn’t have to return to prison for the rest of his life.

Gov. Laura Kelly announced Thursday she would commute or pardon the sentences of McCloud and seven others based on an exhaustive review of more than 200 applicants for clemency.

“This is a very strange feeling,” McCloud said. “Tomorrow’s the first day of the rest of my life. The depression can be gone. You’re free to do what you want to do. You don’t have this hanging over you anymore.”

Kelly said she was making good on a campaign promise to review the criminal justice system and identify people who shouldn’t be incarcerated.

Her use of clemency appears to be unprecedented in recent Kansas history. The past four governors combined took advantage of this rarely used power just nine times, mostly as they prepared to leave office.

“There is some political risk in doing this,” the governor said. “Your opponent, given the opportunity, can and will use it against you if somebody you pardon does something wrong. So I think governors tend to weigh the political risk pretty heavily, because there is a downside.”

Still, she said, “we have to realize that we’re dealing with human beings here.”

McCloud’s story “popped out,” the governor said, as she reviewed candidates for clemency.

The Wichita resident has enjoyed a peaceful life since 2018, when he was released after 27 years in prison for a series of armed robberies that netted him a total of about $6,000. At the state prison in Lansing, he was a model inmate — never disciplined, working a minimum wage job to pay back his victims, portraying Santa Claus when families visited at Christmas, and organizing donations for a local women’s shelter.

Still, Johnson County District Attorney Steve Howe asked the district court to send him back to prison, arguing that a judge mistakenly reduced his sentence. Howe eventually supported McCloud’s request for clemency, but the 67-year-old still faced an additional 21 years behind bars before a chance at parole.

“He was going to be put back in prison on a technicality, not on anything he had done,” Kelly said. “That seemed wrong, completely unnecessary, not fair to him, and not in the state’s best interest.”

Staff with the American Civil Liberties Union of Kansas applauded the governor’s announcement. The organization at the start of the pandemic began working to help incarcerated Kansans navigate the cumbersome application process, and eventually helped 108 clients file for clemency. The governor granted three of their requests.

“We’re grateful that the governor’s office is actually taking a close look at these applications,” said ACLU legal director Sharon Brett. “And obviously, we hope this is just the beginning of additional releases that will come through the executive clemency power. We think many more people are deserving.”

Kimberly Caldwell, a pastor in Houston, can’t wait to wrap her arms around her son, thank God for his release, and remind him of the work he needs to finish.

Joseph Jones was involved in a bar fight he didn’t instigate when he was 21. While on felony bond release, he was charged with distributing Xanax.

In prison, he utilized an online university program to earn a business degree. He also worked for a furniture manufacturer. He was supposed to be released in March 2022.

“My next prayer is for God to open up these doors, my son to get a good job, and there will be somebody out there who will see him and see his drive and passion,” Caldwell said.

The governor commuted the sentences of Jones and McCloud, as well as three others. Joseph Agrillo, Dominic Holder and Loren Thibodo were all convicted of crimes involving marijuana.

Three others received a pardon.

Xuan Hiep Le, a refugee from Vietnam, served a prison sentence for being the getaway driver in an aggravated robbery. He now owns Le Construction Inc. and, after living in the United States for 40 years, wanted a pardon so he could apply for citizenship.

Chivonda Hall’s convictions for DUI and her involvement in a bar fight were both expunged, but her criminal record still shows up on background checks. She asked for a pardon so she could become a licensed nurse.

Joshua Townsend served six months of probation after he was found with drug paraphernalia during a 2013 traffic stop. Now a sheriff’s deputy in Nebraska, he asked for a pardon so that he could further his career in law enforcement.

Kelly said her administration began reviewing candidates for clemency before the pandemic began, a thorough and time-consuming process. By letting someone out of prison early, she said, she is effectively re-sentencing them.

“We wanted to make sure we knew why this one deserved to overturn that original judge’s decision to sentence someone for a certain period of time,” Kelly said. “We wanted to be very careful about how we went about this, and not second-guess people.”

Nadine Johnson, executive director of the ACLU of Kansas, said governors should use their power of clemency as tool for correcting problems with the criminal justice system.

“It shouldn’t be about situational courage where someone is on their way out of office, and they can grant pardons to a number of different people based on perhaps the connection,” Johnson said. “It really should be about where can we bring that measure of justice.”

The threat of COVID-19 to vulnerable prison populations brought the value of clemency into focus. As of June 21, state officials had documented thousands of infections in state prisons. The virus killed 16 inmates.

In April 2020, the ACLU under former legal director Lauren Bonds took legal action to secure the release of vulnerable inmates with low-level crimes. The courts rejected the challenge, so the ACLU pivoted strategy.

The organization worked with University of Kansas Law School students to help inmates apply for clemency, a cumbersome and time-consuming process, and eventually expanded its scope beyond those who were most at risk for COVID-19.

In Kansas, applications for clemency are handled by the Prisoner Review Board, a three-person panel appointed by the corrections secretary. The process is shrouded in secrecy. The board considers statements from victims, prosecutors and judges and weighs their comments against a written plea from the criminal who seeks mercy. All of the documents and decisions are excluded from Kanas open records law.

The board delivers its recommendation — rarely, if ever, has the board authorized an early release — to the Department of Administration. That agency conducts another secret review before turning the application over to the governor’s office. The governor is not required to act on the requests for clemency. Traditionally, they are ignored.

The ACLU strategy included proactively collecting victim statements for the Prisoner Review Board and working with the governor’s legal team to answer questions on behalf of their clients. The organization stopped filing applications in December, but now provides an online toolkit to aid the process.

Kelly said her administration will continue to search for clemency candidates for as a long as she is governor. She expects news of her pardons and commutations could lead to many more applications.

“The team is fully expecting an onslaught,” she said.

Brett, the ACLU legal director, worked with Jones, Holder and McCloud on their applications. On Wednesday, she met with her clients by Zoom to deliver the news.

It was a beautiful moment.

“You could feel just the sort of infectious joy from each of them,” Brett said. “They wanted to sort of reach through the camera and hug all of us and hug the governor herself. It’s a really special thing. It’s giving people the gift of time back with their loved ones.”

She said the governor’s commutation is a recognition of accomplishments and hard work from each of the three men.

“They really want to be a model for why clemency is a risk that the governor should take and the good that it can do,” Brett said.

McCloud said his mind and heart were committed to making amends. The robberies were driven by anger and depression over a divorce. He became addicted to the adrenaline rush of pointing a gun at someone and demanding their money. His victims couldn’t know he had no intention of hurting them, and would have walked away if they declined.

When he went to prison, it felt like God put him in timeout. Now, he feels blessed to be able to sit under a shade tree, petting his cat and sipping iced tea.

His advice to young hellions today: “Get that education. It’s the most important thing in your life right now. Learn everything. Study. Listen to your teachers.” 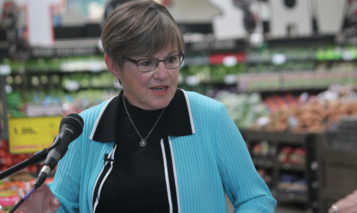 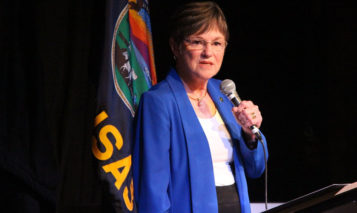 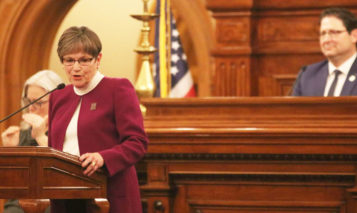 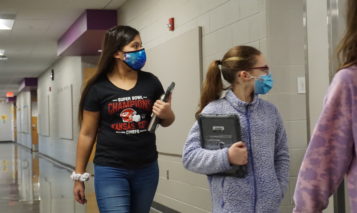 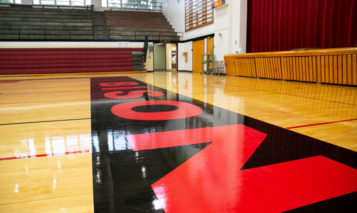