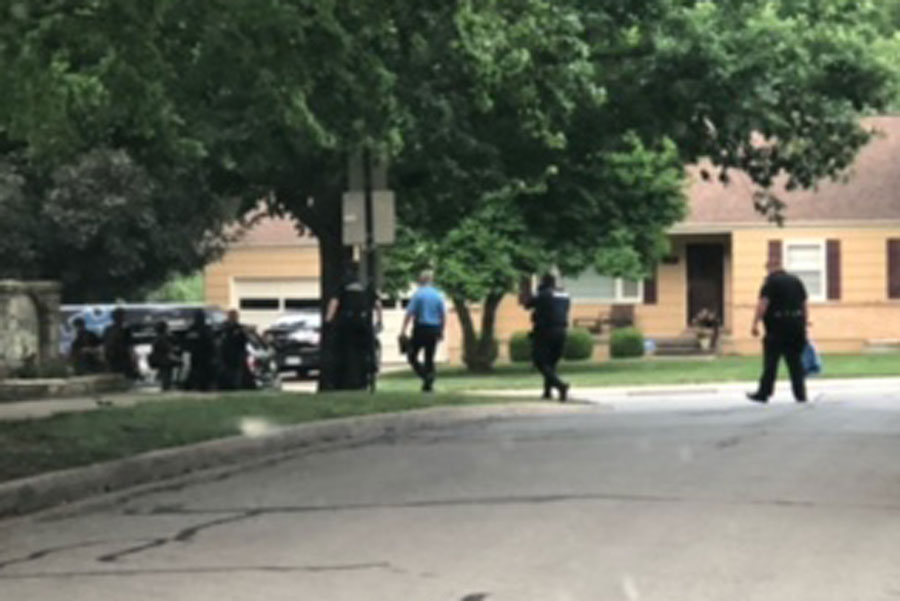 A cell phone photo taken by a resident shows law enforcement officers at the intersection of 62nd Street and Mission Road on Sunday night during an investigation of an alleged shooting that occurred earlier that evening in Prairie Village. Police say a vehicle linked to the shooting was seen fleeing the house on Mission. The orange-colored home in this image was not the focus of the police investigation.

Prairie Village Police say an investigation into a shooting Sunday evening along Roe Avenue led to a home in the 6200 block of Mission Road in Fairway that same night.

The Shawnee Mission Post received multiple tips from readers that a large law enforcement presence was seen in the area of 62nd Street and Mission Road Sunday night, right across the street from Neale Peterson Park, adjacent to the Fairway city pool.

In response to the Post’s inquiry, Capt. Brady Sullivan with Prairie Village Police said a vehicle linked to the earlier shooting on Roe fled the scene at the home on Mission.

Sullivan said investigators were able to talk to people at the home. One arrest was made Sunday at the home related to an outstanding warrant from another agency, according to Sullivan.

No charges have been filed in connection to the shooting.

Four residents in the area who spoke with the Post but wished to remain anonymous said they saw more than a dozen officers clad in tactical gear surrounding the home near 62nd and Mission on Sunday.

The area is a few blocks north of Indian Hills Middle School and sits near where the boundaries of Fairway, Prairie Village and Mission Hills meet.

The residents said they observed snipers positioning themselves around the home and that Mission Road at the intersection with 62nd Street was closed off going both north and south.

The residents all said officers urged them to either evacuate the area temporarily or go to their basements during the operation.

Capt. Sullivan confirmed residents in the area were urged to take shelter though no “mandatory orders” were given.

He also said snipers were on the scene, along with Prairie Village Police’s Critical Incident Response Team, or CIRT, a unit akin to a SWAT Team that is typically deployed for things like active shooter situations and fugitive apprehensions.

“The CIRT team was deployed with the safety of the officers, the public, and all the people on scene as the main priority,” Sullivan said. “I can’t go into specifics on their tactics, but the original incident [the alleged shooting on Roe] involved at least one firearm and had multiple shots fired so gunfire was obviously a concern.”

According to witnesses, no shots were fired during the operation at the home on Mission.

The residents in the area said they saw or spoke with officers from multiple northeast Johnson County law enforcement agencies. Sullivan said he could not comment on the involvement of other agencies.

The Johnson County Sheriff’s Office confirmed to the Post that they were not involved in Sunday’s operation.

Police at the home on Mission Sunday night were investigating an alleged shooting that had occurred earlier that evening in Prairie Village.

In that incident, police say gunshots were fired from a gold Chrysler minivan at another vehicle as both vehicles were traveling northbound on Roe Avenue near 69th Street.

Nobody was injured in the shooting, but Prairie Village Police said afterwards they were searching for two suspects.

House focus of police attention before

The neighbors who live in the area of 62nd and Mission say the house at the center of Sunday’s operation is the frequent focus of law enforcement attention.

They say they have sometimes seen police at the home multiple times per week in recent months.

Sullivan said the home at which Sunday’s operation was carried out has been the focus of Prairie Village investigations before, though he would not confirm the specific address.

Sullivan said the investigation into Sunday’s shooting along Roe is ongoing.