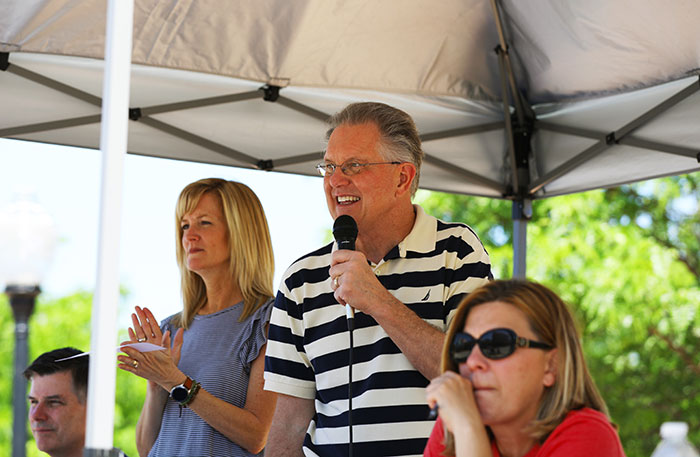 Below is the submission this week from Republican State Sen. Mike Thompson of Senate District 10, which comprises parts of Merriam, Overland Park and Shawnee.

The legislative session came to an end on May 26, which is a day called Sine Die.

It’s separate from the rest of the veto session to allow the legislature to consider any overrides of vetoed bills that were passed during the veto session, as well as any emergency, last-minute items needing consideration before adjournment until January 2022.

During the period between the veto session and Sine Die, the governor vetoed three items which we felt were necessary and helpful pieces of legislation.

There was a wrinkle this veto session. The House did not have enough legislators present to obtain the 84 votes necessary to override the governor’s vetoes.

In the Senate, almost all of our members were present, but the absences in the House made overrides almost impossible, and in the end, none were successful.

As you are likely aware, many businesses are struggling to find workers, even though they are finally fully open. One of the primary reasons for this worker shortage has been the federal government’s $300 per week extra unemployment benefit which, when combined with traditional unemployment, often exceeds what the person was making while actually working – and that creates an incentive for the person NOT to work.

As a result, we’ve seen some businesses forced to operate at less than capacity or to adjust hours to compensate for the lack of staff. Fortunately, the state of emergency due to COVID was finally called to an end by the Legislative Coordinating Council on Tuesday, June 15, so that the transition back to a more normal economy could finally begin.

You may not know that over 35% of the businesses in Kansas shut down permanently over the past 15 months. The distortions in our economy caused by this prolonged shutdown will continue to have enormous and long-lasting impact for some time to come.

Another big problem we have in Kansas is electrical rates that are higher than those in surrounding states. As chairman of the Senate Utilities committee, I am gathering information and talking to stakeholders across the state to attempt to tackle this problem.

This adversely affects everyone in Kansas, from employers, to people on fixed income. There are some areas of the state where electrical rates are twice as much as those in nearby states.

This is just on reason that Kansas has lost over 10,000 residents in the past 10 years! This exodus cannot continue without serious repercussions for those of us that love Kansas and want to remain here! Solving the electrical rate issue is crucial to our future.

In the off-session, I have a number of items I want to work on to prepare for the 2022 session, and I will keep you posted on my ideas and progress in future newsletters to the residents of the 10th district!

You can sign up for my updates by clicking here.