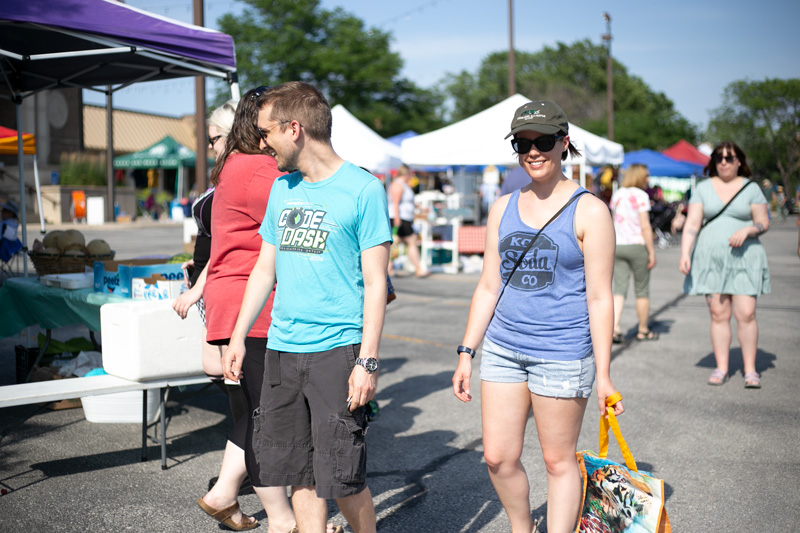 Downtown Shawnee was hopping Thursday night, despite the nearly 100-degree heat, as the community celebrated shopping local and seeing each other's unmasked faces, some for the first time since the start of the pandemic in March 2020. The city's revamped farmers' market will take place the third Thursday of every month through October. Above, Matt (left) and Angie Thompson of Kansas City, Kan., crossed the county line to do some evening shopping at the market.

Temperatures Thursday afternoon swelled to 99 degrees in downtown Shawnee, but that didn’t stop hundreds of residents from flocking to the downtown area around Nieman Road and Johnson Drive for the city’s first-ever Moonlight Market.

Moonlight Market will take place the third Thursday of every month through October.

The first scheduled Moonlight Market was canceled last month because of stormy weather. Nonetheless, community leaders hope events like the Moonlight Market can make downtown Shawnee a destination this summer, especially as Johnson County starts to return to a sense of pre-pandemic normalcy.

On Thursday, for the first time in more than a year, Shawnee’s downtown truly came alive. Nearly all market-goers and vendors went unmasked, and smiles were evident on many faces, despite the blistering heat.

Here are some images of the evening:

The Sam Platt Trio belted out colorful tunes, creating a lively background as couples and families wandered through the booths and picked up refreshments from the local breweries and bakeries. Children played in the spray of a fire hydrant, the shimmer of the water tossing a rainbow across Barton Drive.

It wasn’t all fun and games for Shawnee Mayor Michelle Distler.

She agreed to get dropped in a dunk tank in order to raise money for the annual Mayor’s Christmas Tree Fund.

However, she told the Post she suffered a mild injury towards the end of the evening when the tank collapsed and trapped her leg.

Shawnee firefighters had to free her. She was briefly hospitalized and is now recovering from soft tissue damage and swelling.

“No good deed goes unpunished right?” she said. “It was fun up until that point and raised money for good causes, so hopefully it was worth it.”

Customers streamed in and out of the open doors of local shops along Johnson Drive. Betty C’s also had live entertainment, with Brianna Greene belting out “Redneck Woman” and other crowd favorites.

For some families, the Moonlight Market marked the first major social outing following the drawn-out saga of the pandemic.

For others, it meant supporting local businesses, as dozens of makers, bakers, brewers and creators came out to show off their brands and sell their wares, some of them for the first time ever.