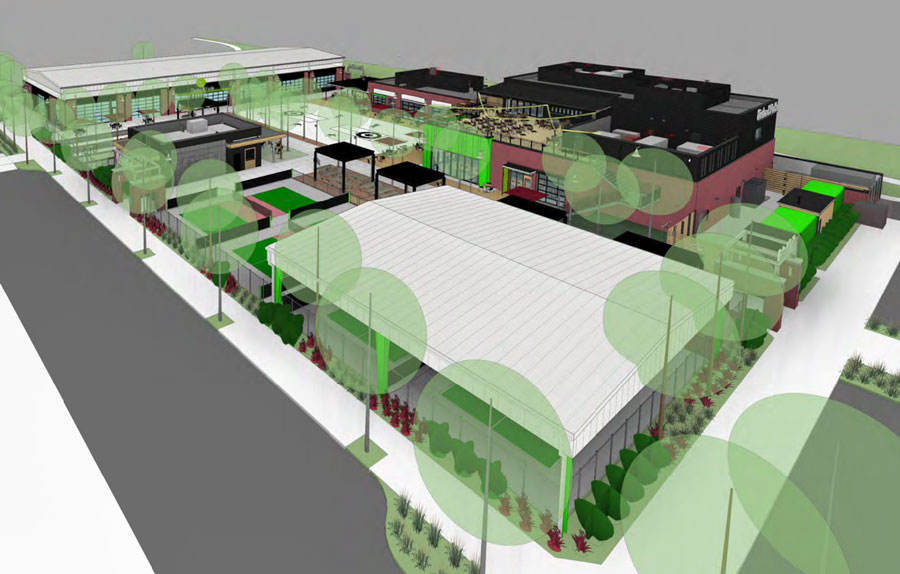 A new Chicken N Pickle restaurant and bar is already under construction at Prairiefire along 135th Street, but developers had made some minor tweaks to the site plan, which needed approval.

Commissioners also greenlit the final site plan for SERV Promontory, an entertainment venue at 91st and Metcalf that is set to include pickleball courts along with several restaurants housed in repurposed shipping containers.

Both items fell under the commission’s consent agenda, which was approved unanimously 9-0 with no discussion.

Chicken N Pickle, which operates its popular flagship location in North Kansas City, broke ground on its Prairiefire franchise last year with the hope of opening sometime this fall.

That will allow for a nearby building housing indoor courts to be shifted over to make room for electrical equipment to be mounted on the ground and shielded from view of passing motorists.

The revised Chicken N Pickle plan also does away with a fabric covering over the outdoor courts and replaces it with a metal roof.

In a memo to the commission, city staff said this was done because the fabric material did not perform well in the elements at another Chicken N Pickle location.

Plans still appear to be set to have a large green space on site which can be converted into an ice rink during the winter months.

The final plan for the SERV Promontory development at 91st and Metcalf was largely unchanged from the one that won approval from the planning commission in April.

The latest SERV Promontory plan did include traffic and environmental impact studies. City staff concluded that the development would not have a negative impact on traffic flow along the busy Metcalf corridor.

The staff memo also concluded that SERV’s design plan would not require additional stormwater or flood mitigation work because the site plan would decrease the amount of “impervious surface” from what is currently there.

Concerns do remain about noise coming from SERV Promontory once it’s complete.

City staff noted, “The applicant is aware of these concerns and will have to mitigate any complaints by surrounding property owners as well as meet the noise ordinance.”

But she voted along with the eight other commissioners unanimously to approve the SERV plan Monday.

Developers had said previously they hoped to break ground at SERV Promontory later this year with the aim of opening sometime in 2022.