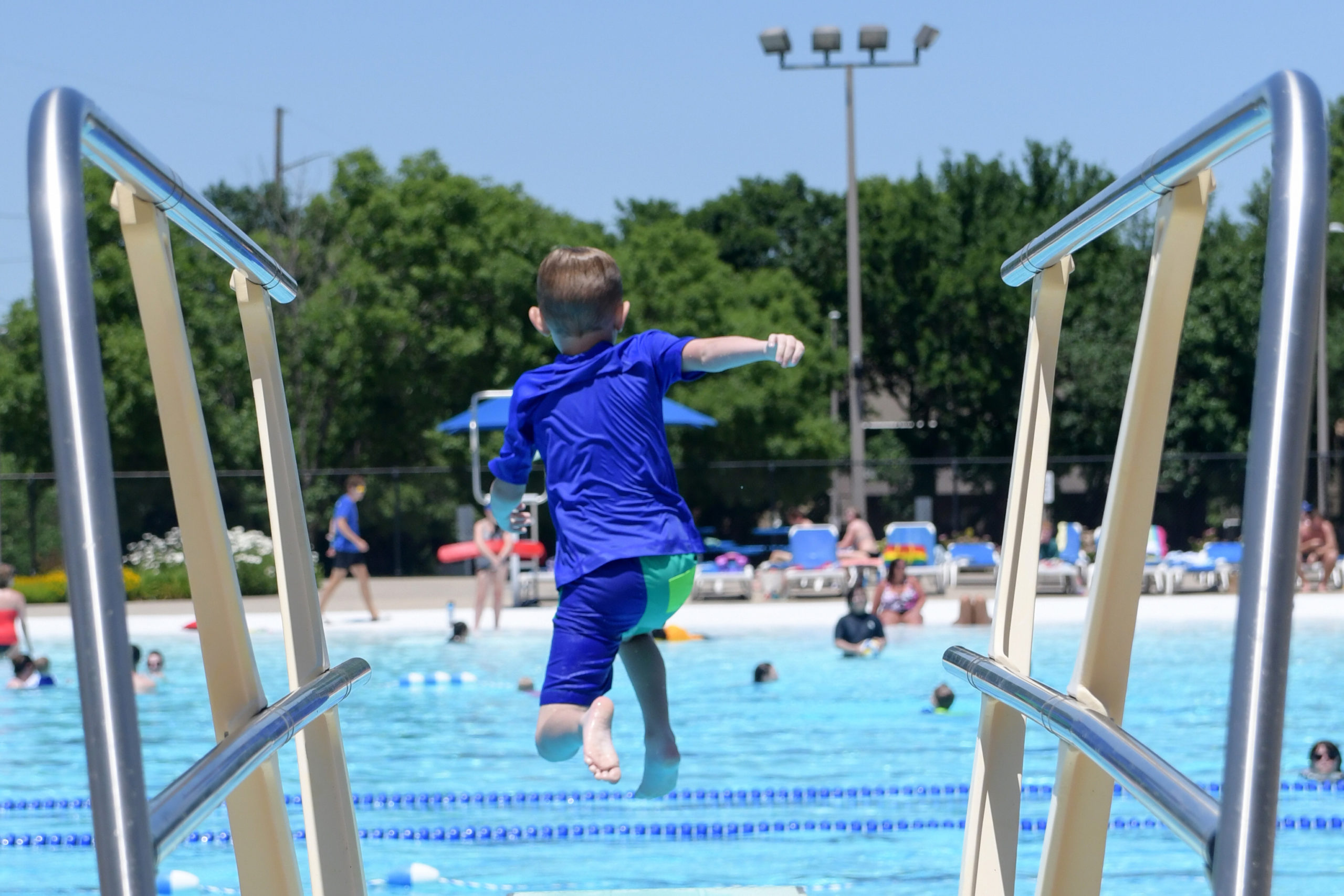 Lenexa is keeping Ad Astra Pool at 83rd and Maurer and will look into potential options for a revamped aquatics site there. The city council on Tuesday rejected a consultant's recommendation to close the pool. Above, a young swimmer jumps into Ad Astra Pool. Photo credit Wendy Delzeit.

Lenexa city leaders have decided to keep Ad Astra Pool open, despite a consultant’s recommendation that closing the aging pool would be more cost-effective in the long run.

By rejecting the option to close the pool, the Lenexa City Council on Tuesday directed city staff to come up with possible alternatives for a revamped aquatics facility at the Ad Astra site — and find funding to pay for it.

Waters Edge recommended closing the pool because Lenexa — with three outdoor pools — has more water surface area than other cities its size. The consultant’s report suggested the Ad Astra pool site be repurposed into another recreational amenity at Ad Astra Park.

The council’s vote came after more than two hours of discussion and hearing public comments from neighboring residents who live near Ad Astra Pool, many of whom formed a coalition to urge the city keep the pool open.

About a dozen residents spoke, all in favor of keeping the pool.

Built in 1988, Ad Astra Pool — which sits at 83rd Street and Maurer, near Christa McAuliffe Elementary — has had a history of maintenance issues compounded by uneven settlement of its foundation.

The city has tried on several occasions to to fix the pool’s piping system.

The council’s unanimous vote Tuesday came just a week after a council committee meeting in which city leaders suggested their support for closing Ad Astra Pool.

Members of the Save Ad Astra Coalition shared their surprise with the council’s vote.

“I’m trying to process right now,” said Marie Riley, a substitute teacher in the Shawnee Mission School District and vocal supporter of the pool. “I kind of felt like it was heading a different direction and was starting to feel discouraged.”

Riley said she and her neighbors are grateful for the council’s decision.

“I feel like this decision is going to reflect very, very well on them because they’ve shown tonight that they’re listening to what the constituents want,” Riley added. “Instead of just making big decisions on our behalf for us, they’re actually listening to our input and even changing their mind. That feels really good as a resident.”

Emily Nelson, a sixth grader and regular swimmer at Ad Astra, also shared her delight with the decision.

“I think it’s super exciting that we’re being able to keep the pool,” Nelson said. “I spoke in the community, and I did it again, and I’m so glad that it made an impact.”

The city council on Tuesday also voted 7-0 to accept the aquatics study and move forward with a separate recommendation by Waters Edge to reinvest in Indian Trails Aquatic Center in Sar Ko Park Trails Park off 87th Street Parkway.

The consultants suggested modernizing it as a community-wide aquatic center, or waterpark, with “the appropriate mix of amenities,” according to city documents. Indian Trails is also aging and in need of renovations, the consultant’s report said.

A spokesperson for Lenexa said the city spent $67,800 overall on the aquatics study.

Councilmembers said their support for keeping Ad Astra Pool is a result of listening to residents who believe the city pools are vital for building community, especially in neighborhoods that don’t have HOA-operated pools.

“I think we need both [Indian Trails and Ad Astra],” said Councilmember Courtney Eiterich. “I think that both options are there for a reason. I think they meet different needs at different times in your lives.

Several city leaders agreed, saying they liked hearing about this alternative option from city staff to keep a pool on the Ad Astra site.

Mayor Mike Boehm thanked the consultants for their work on the study and city staff for being flexible.

He also stressed that with the city council’s decision, improving Indian Trails remains the city’s focus.

“I see a tidal wave change in the last week or two, with more information,” Boehm said. “That’s a good thing. We do that. We gather and we listen, we gather and we listen, and we stew and we toss and turn at night. We don’t talk to each other, so we don’t know what anyone else is thinking. So you get here and you find out the tide has shifted for good reasons.”