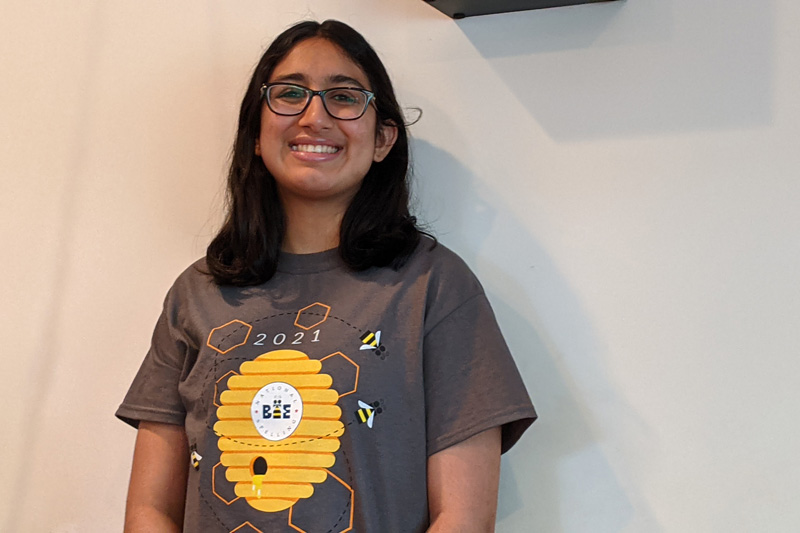 Ishya Bhavsar has advanced to the semifinal round of the Scripps National Spelling Bee after successfully advancing through the quarterfinals, which were held virtually on Tuesday. She successfully spelled "frieze" as her final word to advance. Photo courtesy Ishya Bhavsar.

Ishya Bhavsar, a recent eighth grade graduate of Indian Hills Middle School in Prairie Village, has advanced to the semifinals of the Scripps National Spelling Bee.

Bhavsar, who describes herself as a passionate speller who loves the competition, successfully advanced through the bee’s quarterfinals round, which took place virtually on Tuesday afternoon.

She’s now one of 30 students nationwide who will compete in the semifinals.

“I was really nervous when I was just starting out because a spelling bee, like it’s such a fickle thing,” she said. “You could know every word in a round but not know your word and you’d still be out. But I just had to trust in my preparation.”

The semifinals are set to take place Sunday, June 27, and will be broadcast live on ESPN2 at 6 p.m. that night.

‘Frieze’ for the win

The last word Bhavsar spelled correctly in the quarterfinals was “frieze,” a decorative strip along a wall near a ceiling. She faced more than 70 other spellers from across the nation.

“I’m just really excited to compete again,” Bhavsar said. “I like spelling words a lot, and I just want to do my best out there.”

Before earning her spot in the national bee, she was named the top Johnson County speller in this year’s county spelling bee earlier this year.

Bhavsar said she wanted to thank her proctor, Ms. Theresa Jones, for helping her gain entry into the spelling bees this year.

“She’s been helping me since, like, the school level, and I’m really thankful to her, because honestly, without her, I wouldn’t have the opportunity to compete,” she said.

Bhavsar has won the Johnson County Spelling Bee two years in a row, and was also the winner of the Sunflower State Spelling Bee in March.

Making up for last year’s disappointment

As the state champion, she is sponsored at the national spelling bee by the Kansas Press Association in Topeka.

Her favorite word to spell so far in competition this year is “onomatopoeia,” which means the process of forming a word from a sound associated with its name.

Last year’s Scripps National Spelling Bee, which Bhavsar qualified for after winning the state bee, was canceled due to COVID-19.

“I was super disappointed because I really wanted to compete and just see how far I could go,” Bhavsar said. “But the quarantine period allowed me to just have more time to focus on spelling, because it wasn’t like I could go anywhere or do anything. But for the other eighth graders, I felt really bad because it’s not like they were going to have another chance.”

Bhavsar will enter her freshman year at Shawnee Mission East this fall.