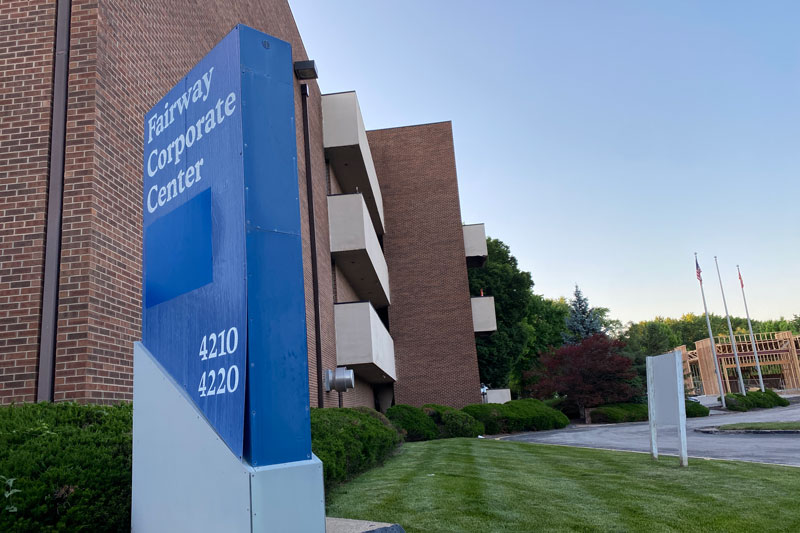 The Fairway Corporate Center at 4210 to 4220 Shawnee Mission Parkway could become an "active adult" apartment complex, geared towards independent seniors who don't need a high level of care. The city of Fairway agreed to continue to discuss the possibility with developers EPC Real Estate Group and Platform Ventures, who would be asking for about $15 million in TIF for the project. Photo credit Juliana Garcia.

While developers did present preliminary plans to the city council, no development plans or redevelopment agreements have been made.

The funding agreement that the city council unanimously approved puts $25,000 in a fund for city staff to use for legal and administrative fees they’ll incur while exploring the apartment complex as an option.

The corporate center is adjacent to the former site of a Stroud’s restaurant currently being redeveloped into a multi-tenant property anchored by a Starbucks.

The new funding agreement also states that any costs that have incurred to date regarding the project are reimbursable by the developers, City Administrator Nathan Nogelmeier said.

“This [agreement] simply allows [the city attorney] and I to start the work behind the scenes with developers to figure out what exactly the project would entail from the city’s perspective,” Nogelmeier said.

Dubbed Fairway Active Adult Apartments, Bradley said the target resident age at the apartment complex would be 55- to 84-years-old.

Developers would strip out the meals and the in-house care typically found at senior living facilities, which is why it’s called an “active adult” complex, he said.

The tentative plan also would include amenities like an outdoor community garden, a fitness center, a spa, pools and fire pits, Bradley said.

Developers would be requesting about $15 million in tax increment financing to help offset the costs of demolishing the office complex and the new two-story parking garage that the apartments would sit on top of, he said.

Bradley said the timeline for the potential project, which the city council has agreed to continue discussing through the approval of the funding agreement, is as follows: