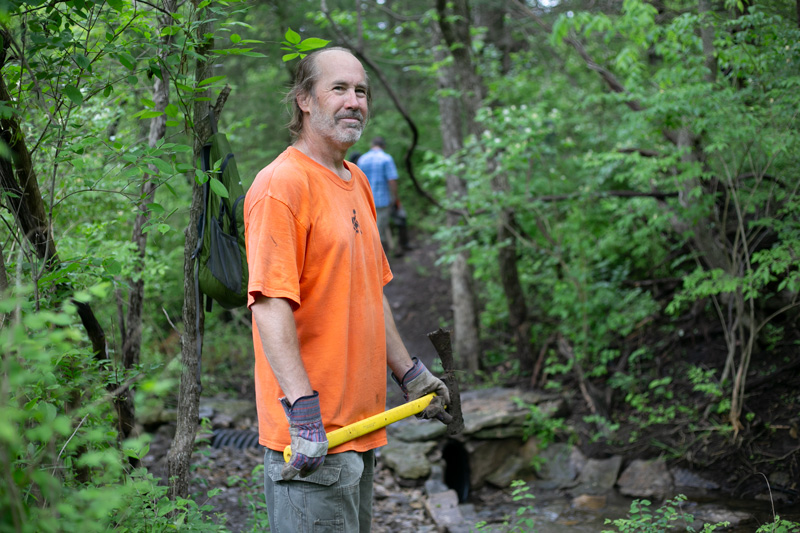 A brand new soft-surface trail for mountain biking and hiking is now open in Cedar Niles Park in Olathe, thanks to the work of volunteers like Pete Barth.

A volunteer for more than 20 years with Urban Trail Co., Barth helps build trails around the Kansas City metro area. They’ve been working on the initial loop in Cedar Niles Park for the past two years and finally opened it a few days ago. Click here to learn about the status and conditions of trails in the metro.

Urban Trail Co. formed out of an awareness of a need back in the 1990s for more trails in the Kansas City area. The nonprofit has some overlap of members with Earthriders Mountain Bike Club, a social group for mountain biking.

Besides working on trails, Barth also enjoys riding them. He grew up on the East Coast and has been an avid mountain biker since the early ‘80s, when he was a college student in Lawrence, Kansas.

Barth earned his bachelor’s degree in computer science from the University of Kansas and worked for Cerner for 29 years before retiring. He lives in Olathe.

Part of the formation of Urban Trail Co., the whole trail-building aspect of it kind of grew from the early days of mountain biking, where if we didn’t build it, it wouldn’t happen. If the mountain bikers didn’t get involved in constructing the trails that they wanted to ride — it’s so expensive to have it hired and built professionally — it wouldn’t have happened.

So the organization allowed us to enter into formal agreements with cities and counties and government agencies that own the public land that we want to build on. Our deal is, we will come in and build and maintain these trails for free. Completely for free. All we want is the access. After we build them, you let us ride them (laughs), right?

And there’s always been kind of an ethos among mountain biking to chip in and help out and help maintain them. I equate it to replacing your divot when you’re playing golf. It’s part of the sport, is to give back, because they get a lot of use and they get wear and tear, and constantly need maintenance and repairs at times.

It’s a lot of work. Usually we work in the winter because there’s less snakes and ticks and mosquitoes flying around. So this is like the last work day ‘cause we’re trying to get it done and don’t like to work in the summer.

The first step of course is to work with the land manager, figure out where they want us to build, where they don’t want us to build, any special areas that they would like us to avoid because of sensitive vegetation, or well there’s old abandoned mines over here, so don’t go near that, that kind of stuff. Like water wells, stuff like that. They don’t want people to fall in. Understandable.

There’s wells that are capped out in the woods. There’s an old dump, just a big pile of scrap metal and garbage that’s out there. It’s like, ehh, we don’t want to go by that.

The very first step in construction is to just walk around in the woods and find interesting things like the creek that we’re standing at right now. We’re looking for the best way to use the available land that we have to work within.

Elsewhere on this loop, there are some spots that are very high up on a bluff that overlook the woods and the land below, which are absolutely stunning.

It’s a lot of limestone outcroppings, so there’s big rocks that we’ll go through. There are large cedar groves that are very dense. There’s a lot of varied terrain and lots of interesting land formations and rock formations and vegetation. There are spots where there’s Columbine plants, all kinds of beautiful, native plants along the trail.

I think the section that people will enjoy the most is the stretch that’s pretty long, it’s up along the top of a very steep hillside. There are just beautiful views of the woods below, and the rocks are enormous and interesting.

There’s the shell of an old car in the middle of the woods back in there. We might go by that ‘cause that’s kind of interesting. I think it’s a ‘40s or ‘50s car.

We see a lot of stone walls, like hand-stacked stone walls [here on this trail]. Sometimes, just abandoned stuff from the former landowners, like old farm equipment or whatever. There’s history.

Sometimes, you see stone structures and old foundations, things like that. It’s kind of interesting. It makes you appreciate the history of the land, that there was stuff here before. Not so much this trail, but in other trails, it’s like there are old structures that are still standing from before De Soto and so on were cities.

So once we’ve got permission and then we’ve scouted the land, then the work begins to define the trail itself. A lot of it is cutting back the trees and vegetation on the side so that you’re not having to bushwhack through the flora.

And any kind of rock work that’s needed, sometimes when you’re digging out and smoothing out the actual trail surface, there are big rocks that need to come out, there are sometimes rocks that need to be put in, lots of different techniques, all of which are mainly done to one, make for an interesting experience in the woods, and two, to control water, which is the biggest factor that wears out the trails.

It’s all about controlling water erosion. And so we spend, really, a lot of time trying to see where the water is gonna go and different techniques to make sure the water, when it rains, gets off the trail surface as quickly as possible so it can dry out, and to slow it down. When the water’s rushing through here, it’s gonna take a lot of dirt away with it. We don’t want that to happen on the trail.

It’s a lot of, I wouldn’t really say conservation-type work, but it kind of is because if the trails get eroded away, then we have to redo it, which is a lot of work.

The reason that we’re all out here doing this is primarily because we love being out in the woods. Most of us love mountain biking. It’s such a great way to kind of escape the day-to-day. When you’re out here, a lot of the trails are challenging enough that you really kind of forget about everything else that’s going on. I mean, you have to focus on what you’re doing, ‘cause otherwise you’re going to wreck, basically.

It’s just a great escape. You’re out here in nature, getting essentially what’s known as a forest bath. It’s beautiful — the sounds, the sights, the scents — it’s wonderful.

Most of the trails that we build are open not just to mountain bikers but to trail runners and hikers as well. We like to build our trails for those specific types of uses. We encourage people to come out and hike them. We see a lot of people out here with kids, and it’s really nice. That’s very rewarding is to come out and see families out hiking on the trails and having a good time in the woods.

You see people out that if you saw them on the street, you’d never imagine that they’d be out in the middle of the woods but they are, because these trails are here.

Especially in the past year, with the pandemic, getting outside was a huge thing that a lot of people discovered. We saw just even more people out enjoying the trails and getting away, and having a way to unwind and escape the whole pandemic thing.

That’s really the most rewarding thing for me, is seeing other people enjoy the work that we did and made possible for them and for the community.

This is just the first loop. This initial loop that we’ve been working on for two years is about four miles long. Ultimately, we’ve kind of mapped out where eventually — we don’t know how long it’ll take — there could be close to 20 miles of trails out here. So it’s like every year, as soon as it starts to cool down in the fall until well into spring, we’re out here working.