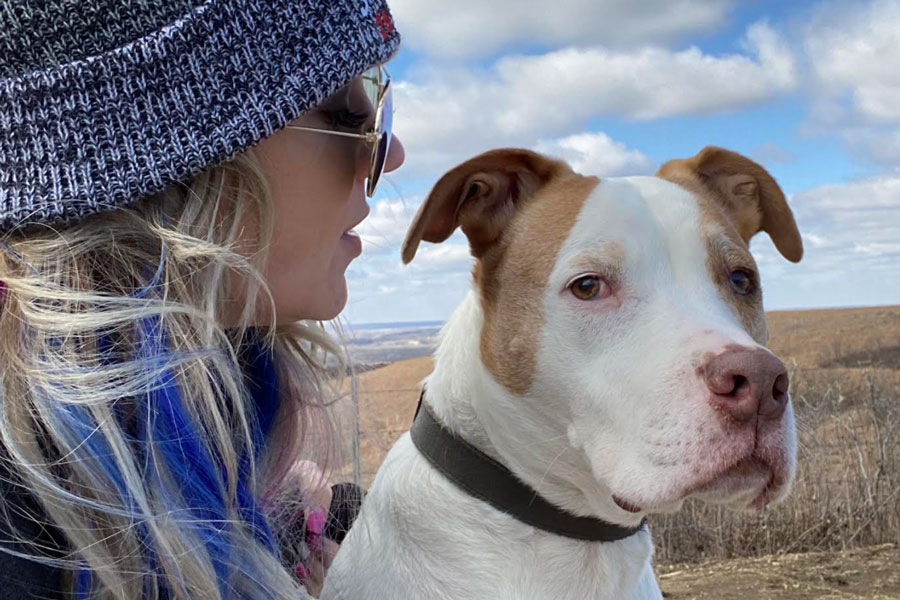 About two dozen people spoke at a public hearing Wednesday in favor of repealing Overland Park's ban on pit bull breeds. They included Tori Shirah, above, with her pit bull terrier Gunther, who died in February. Shirah told city councilmembers that Gunther was gentle and beloved by her two young daughters, but that while he was alive she was afraid to be public about owning him because his breed is illegal in Overland Park. Image courtesy Tori Shirah.

For Tori Shirah, the chance to share with Overland Park City councilmembers about her beloved pit bull terrier Gunther was bittersweet.

Gunther was so gentle, Shirah told a city council committee Wednesday night, that she felt no qualms about having him in the house when she brought her newborn children home from the hospital.

As she spoke, a friend, Kimberly Smith held up a poster board with pictures of Gunther with the kids.

“Once you own a pit bull it changes you,” she said. “They are people pleasers to the core. They just want to make their owner happy. And we are their voice.”

Gunther died in February of bladder cancer. Had he not, Shirah says she would not have been able to speak so openly about him on Wednesday because as a pit bull, Gunther had been living illegally in Overland Park.

Shirah was one of 25 people who spoke to the city council’s Public Safety Committee Wednesday night as the city begins to consider whether to repeal its 16-year-old ordinance banning pit bulls.

All but one speaker on Wednesday supported the repeal.

The speakers came from a variety of occupations. Tam Singer, CEO of Great Plains SPCA, advocated for repeal, as did Greg Musil, a development lawyer who said he’s fostered more than 100 dogs, of which a quarter were some type of pit bull mix.

A few veterinarians also spoke in favor of repeal, as did an emergency room nurse.

Real estate agent Heather Bauer said the ban on pit bulls has proved a deterrent to people who want to live in Overland Park but are afraid their dog might not be allowed.

“Probably 85% of my clients have dogs, and many of them have pit bulls. It definitely is a deterrent,” she said. “It’s been a real struggle many times finding them homes. Honestly, I think the whole thing is a little silly. I think it’s pretty prejudiced.”

Several speakers mentioned the fact that the definition of pit bull itself is somewhat subjective.

One subsection of the city’s code pertaining to dangerous animals focuses on pit bulls.

That can cause anxiety for dog owners like Katie Burke.

“I have a dog that’s a Labrador-boxer mix that gets accused of being a pit bull all the time, which frightens me. If I have a neighbor who just doesn’t like me, they can report my dog and punish me because of how it looks,” she said.

In an effort to avoid that, she said she got DNA testing for her dog.

A. For the purposes of this chapter “dangerous animal” means and includes

3. Any pit bull dog. “Pit bull dog” is defined to mean any and all of the following dogs:

a. The Staffordshire Bull Terrier breed of dogs;

b. The American Staffordshire Terrier breed of dogs;

The registration of a dog at any time in any jurisdiction as a pit bull or any of the dogs listed above shall constitute prima facie evidence the animal is prohibited by this section.

Kathryn Koehler and others said it’s wrong to single out one particular breed as dangerous based solely on looks when there’s no purebred definition.

“We rely on looks alone when identifying pit bulls in Overland Park, which means there’s a huge margin for error,” she said.

“I also fear that the ban is less about prohibiting dangerous dogs within our city and more about keeping pit bull owners out,” Koehler added. “Breed specific bans that target pit bulls have been tied to racist underpinnings with preconceived notions about what pit bull owners look like and how they act, and I don’t want my community to promote those ideas. Pets are family, and I want us to welcome all families here in Overland Park.”

Several speakers said the ban undermines public safety because it directs resources toward a whole breed, regardless of individual dogs’ behavior. That gives a false sense of security, when any type of dog can become aggressive with bad treatment, they said.

There were also a couple of references to the pit bulls owned by Chiefs quarterback Patrick Mahomes, who lives in Kansas City, Mo.

Only one speaker, Dennis Degner, was for keeping the pit bull ban in place.

He cited figures — which were disputed by other speakers — that pit bulls are disproportionately responsible for deaths from dog attacks.

“Don’t be misled by the false narrative pushed by advocates and owners of pit bulls,” that it is bad owners, not genetic characteristics of the dogs, that causes aggressive behavior, he said.

Overland Park and Leawood are two of the last cities in the Kansas City area to still have breed-specific bans of pit bulls. Other local cities that adopted bans have since repealed them.

The five committee members after the hearing asked staff to research how the current dangerous animal law could be strengthened on such matters as licensing, spaying and neutering and restrictions on tethering dogs outside.

Most committee members said they were impressed by the evidence presented that breed-specific bans were ineffective and unfair.

Committee chair Paul Lyons said he still has questions about how the dangerous animal ordinance should be enhanced.

The city sought public input on the dangerous dog ordinance on its website, and so far, the vast majority of the 1,600 responses have been in favor of repealing the ban, Lyons said.

If that bears out in another citywide survey, he said, councilmembers might be more comfortable with a change.

“It’s not in terms of whether pit bulls are dangerous or not. It’s whether the public is comfortable with the animal being around,” he said.

The city legal department will need until August to research possible changes before it will be discussed again, he said.

Roxie Hammill is a freelancer who mostly covers Overland Park and Johnson County government for the Shawnee Mission Post. You an follow her on Twitter @roxiehammill.