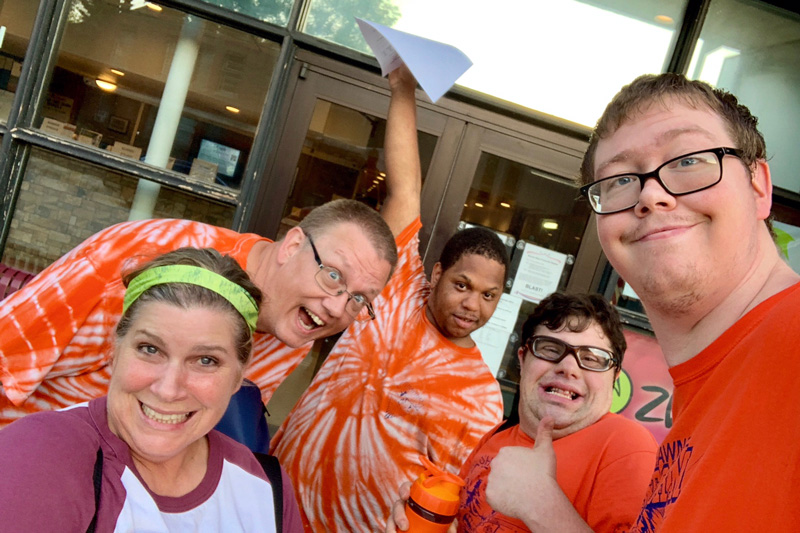 It's been a year since the Shawnee Storm, a local Special Olympics team, played any sports. Now, the squad is asking the city of Shawnee to dedicate staffing and programming so Storm volunteers can avoid burnout. Above, a selfie taken by Shawnee Storm athletes at the Special Olympics Kansas State Basketball Tournament in 2018. From left, Peggy Schmitt, Mark Curl, Marcus Long, Justin Schmitt and Michael Curl. Photo courtesy Michael Curl.

For the better part of the past year, it’s been quiet for the Shawnee Storm.

The risks of gathering during a global pandemic for athletes who live with intellectual and developmental disabilities was considered too great for this local Special Olympics team to keep going to practice or tournaments.

Besides, many state competitions were canceled because of COVID-19.

Now, as Special Olympics Kansas gears up for a new round of sports competitions later this year, the Shawnee Storm is asking the city of Shawnee to dedicate staffing and programming so volunteers can avoid burnout.

Last month, several athletes and volunteers came to a Shawnee City Council meeting dressed in the team color orange to share about their struggles and to ask the city for help.

Specifically, Shawnee Storm is asking for a dedicated, full-time city position to help run the program, and the families hope that Shawnee Parks and Recreation may be able to step up.

“We’re just kind of stretched thin, and it’s really hard for parents with individuals with special needs to continue to work so hard,” said Peggy Schmitt, local program coordinator. “They have enough challenges as it is. And so we’ve just kind of come to a place where it’s time for us to try to find a better solution that will sustain our team longer.”

After hearing from the athletes, the council directed city staff to prepare options and cost estimates for providing the team with city support.

Tonya Lecuru, deputy park and recreation director for Shawnee, said they are looking for ways to help support the Shawnee Storm within the city’s budget as well as possible service goals in the future.

The city says it plans to meet with the Shawnee Storm to continue the discussion in the next few weeks.

Click here to listen to comments from Shawnee Storm. Audio begins at 56:06. The team returns to city council on Monday, June 14.

Ready to return to field of play

In the meantime, these athletes are ready to get back to competition.

“It’s been kind of rough; I’ve been wanting to keep playing sports and everything, but then COVID hit and it got not just me but everybody else down about it and everything,” said Michael Curl, an athlete from Olathe. “Nothing to really look forward to when I got off work or anything like that.”

Schmitt, who is also mother to one of the team’s athletes, agreed, saying the past year has been hard on the team.

“Shawnee Storm is like the team that our athletes, including my son, love so much that they are willing, they love it and they look forward to it and they ask when the next sport is,” Schmitt said. “COVID-19 has been very difficult for them, but it is a team that has become their own. They really just have a hard time being without it. We’ve seen that in the last year.”

Curl, who plays softball, volleyball and basketball for Shawnee Storm, said he misses staying active and spending time with his teammates, who he considers to be family.

He’s seen them off and on the past year, but he most looks forward to “just getting back together with my team and everything and having fun like we used to back in the day, getting everything back to normal.”

Bringing back the Shawnee Storm

Schmitt said they need two things to make programming successful: to get safely through the tail end of the COVID-19 pandemic, and to get support through more volunteers or, barring that, a paid full-time staff position.

“We don’t want to stop helping financially and/or volunteering,” Schmitt said. “Our families are awesome, they will help raise money. They are there to be coaches and volunteers. It’s just too hard on one person. You need your city’s support.”

Historically, Shawnee has helped the team by providing a $2,500 human services grant and support through the mayor’s Christmas Tree Fund, and Schmitt said they are thankful for that.

Now, they’re looking for something similar to what other local governmental organizations such as Olathe Parks & Recreation, Johnson County Park and Recreation District and Blue Valley Parks and Recreation provide.

Established 13 years ago by local athletes and their families, Shawnee Storm has grown from 11 athletes to more than 50. The team has about 20 coaches and many other volunteers, and offers eight sports for their athletes, spending about $22,000 to operate each year.

Some athletes come from neighboring cities because they seek certain sports and a convenient location.

Tim Rehder, director of competitions for Special Olympics Kansas, said Shawnee Storm met a need when it was founded in northwestern Johnson County.

Dedicated staff could handle the hefty amount of paperwork required by Special Olympics Kansas, allowing volunteers the bandwidth to offer more sports and other programming and possibly better access to city facilities as the team grows.

“You’d have a dedicated person who would be able to grow the program and be able to start offering even more services to the athletes,” Rehder said. “With the size of the team and the volunteers offering eight sports to our athletes is amazing. The amount of work it requires to handle that is amazing.”

Schmitt and Rehder think the team could serve anywhere from 100 to 1,000 athletes in that area who benefit from more programming and staffing.

“So we’re not even coming close to touching the amount of athletes that could be on our team,” Schmitt said, adding that she thinks Special Olympics programming in Shawnee can help the city be more inclusive as its population grows and more folks use the city’s transportation available for people with disabilities.

At this point, Schmitt is unsure when Shawnee Storm can pick back up with practices and games, but she is hopeful. Other local Special Olympics teams have been able to return.

Depending on if they have enough help, Shawnee Storm may gear up for bowling in August, when Special Olympics Kansas brings the state competition to Johnson County.

“We really feel like it’s time for us to get some help and help sustain our team for many years to come,” Schmitt said, “because it is a lot of work.”