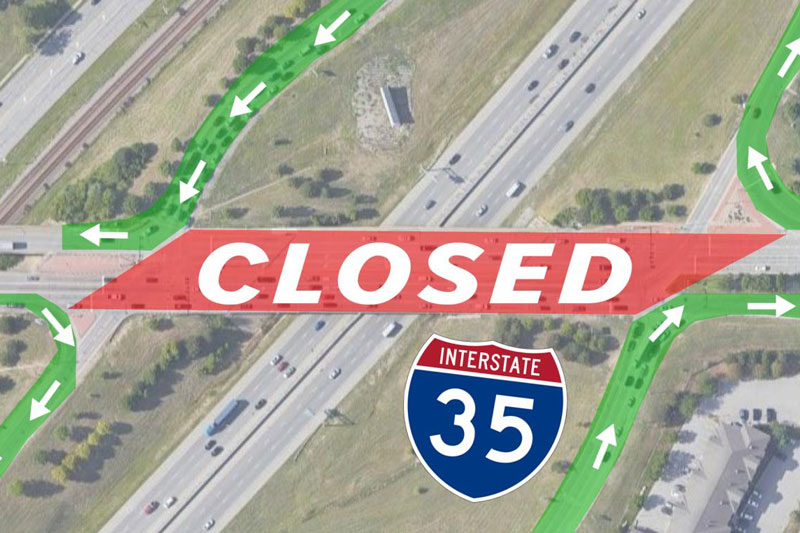 Falling debris on I-35 at the 119th bridge forced the city of Olathe to suspend construction work on the bridge Wednesday. Image via city of Olathe website.

The city of Olathe has suspended work on the 119th Street bridge over Interstate 35 after reports of debris falling on the highway Wednesday.

In a statement released on Twitter, the city said it received reports of debris “coming from the underside of the 119th Street bridge” and that construction work was “immediately paused.”

A statement regarding the bridge construction project at 119 and I-35: pic.twitter.com/htKmd0kbIf

The city said work would not resume until additional safety measures were taken that were meant to ensure the safety of vehicles passing under the bridge.

“The safety of the all travelers is our first priority,” the city statement said.

Those additional measures include “falsework,” or temporary structures meant to support more permanent structures during construction or rehab.

No motorists appeared to have been injured.

“Based on bridge inspection reports before construction, there was no anticipation of debris. The unforeseen circumstances are being addressed,” Kennedy said in a statement to the Shawnee Mission Post.

The work being done

The work at that busy interchange is meant to alleviate increasing congestion at 119th Street and I-35.

The city says the intersection routinely backs up and is the site of a number of traffic accidents that are 11 times higher than the national average for such highway interchanges.

The scheduled work had closed the bridge spanning I-35 and the left turning lanes going to and from the highway.

Based on the city’s original timeline, the work was set to be closed through September and the project fully completed by December.

It’s unclear how long this current delay will last or how that may affect the project’s timeline.