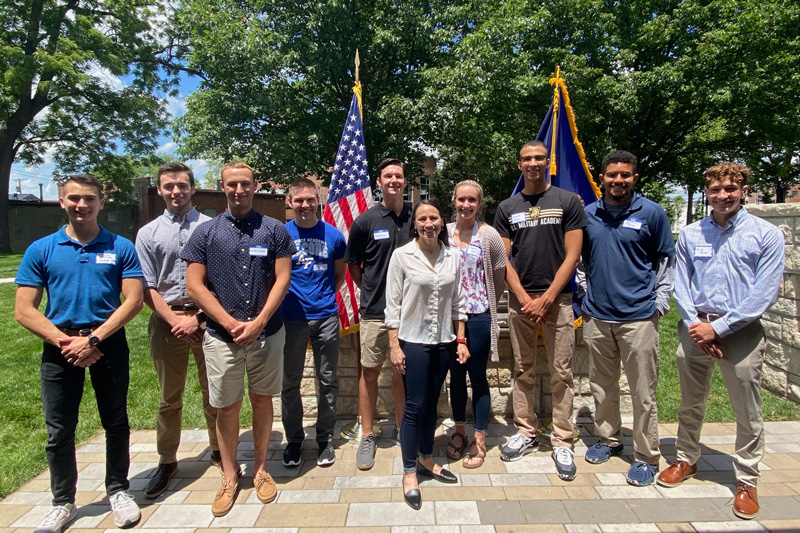 Last week, Rep. Sharice Davids announced that 12 students from the Kansas Third District have successfully received their appointment to a U.S. Service Academy and will continue their education at one of the four eligible federal academies.

In a sendoff event in Overland Park on Friday afternoon, Davids presented each student with a certificate acknowledging their achievement. Additionally, Harden Boldt, U.S. Naval Academy class of 2024 from Shawnee Mission North, shared his advice for the students as they take this next step.

“Receiving an appointment to one of our nation’s service academies requires academic excellence, physical and mental toughness, and a commitment to military service,” Davids said. “As the daughter of an Army veteran, I have seen what it takes to serve our country. I have extreme confidence that these 12 talented students from the Third District will make our community proud.”

The 12 students from the Kansas Third District who received appointments include:

The city of Lenexa is acquiring private property for several city infrastructure projects, including for roadway improvements, storm drainage upgrades and flooding mitigation.

The Lenexa City Council on May 18 voted 7-0 to approve three resolutions that declare it necessary to appropriate private property for public improvements. Councilmember Joe Karlin was absent. These projects include:

Additionally, the city council on June 1 voted 7-0 to approve an easement to access the area under the BNSF railroad through Old Town. The city needs to replace an 8-inch storm sewer pipe with a 24-inch pipe to handle flooding mitigation issues. Councilmember Corey Hunt was absent.

The city council that same day also voted 7-0 to approve a resolution declaring it necessary to acquire easements and rights-of-way to make storm drainage improvements in the areas along 109th Street, College Boulevard and Pflumm Road.

BBN will design a replacement shelter and repair a retaining wall on the northern edge of the shelter, according to city documents. The design agreement is for $16,561.