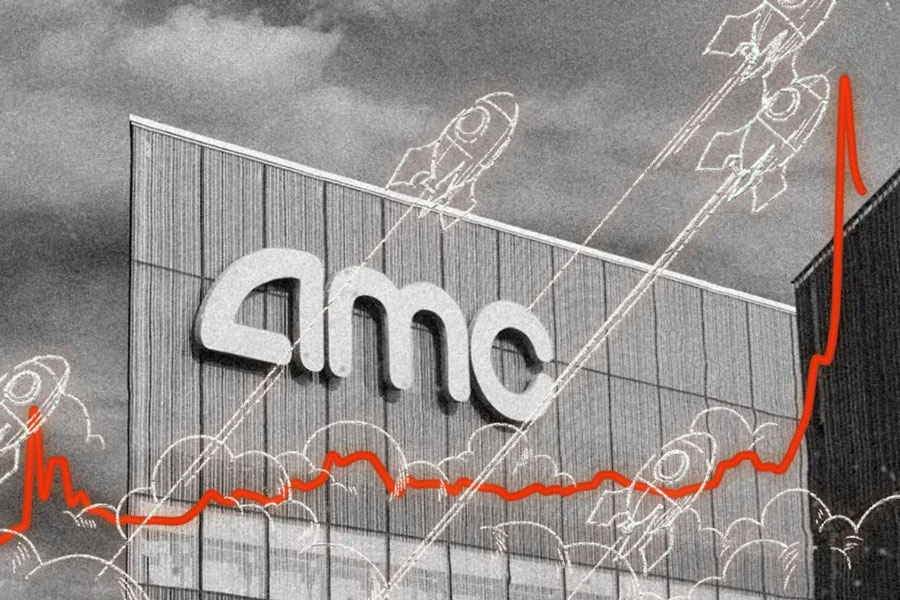 AMC Entertainment, based in Leawood, recently saw its stock price jump from $37 a share to $72 a share in a single day thanks to a push from investors organizing on the social media platform Reddit. Now, the company is taking steps to embrace the self-declared investing "apes" who are upping the company's value. Photo illustration Moy Zhong/The Beacon.

When 22-year-old Anthony Hugo first invested in AMC in February, he and his fellow Redditors were hoping to push the stock price over $8. On June 2, the price hit the moon at $72.62.

The meteoric rise of Leawood-based AMC Entertainment Holdings Inc. stock has largely been fueled by so-called “apes” on Reddit: investors who latch on to certain stocks, then hold on for dear life.

Reddit is a social media platform where people create forums, called subreddits, to share posts and chat about specific topics.

On Monday, June 7, AMC’s stock opened at $52.83. AMC issued a warning the previous Friday, June 4, that the price could decrease as the company decided to sell 11 million shares of stock.

Hugo, from Olathe, started investing in the stock market two years ago, but he said this is the first time he stopped paying attention to technical analysis.

Initially, Hugo saw others investing in AMC on Reddit, and he thought it would be a good way to make a quick buck. But when he saw how big the movement became, he went all in.

Hugo started by investing $100 in AMC for fun. He used Robinhood, an app that garnered attention during the GameStop stock craze earlier this year. He switched to TD Ameritrade to invest more.

“If I can retire off this money, and kind of give a big middle finger to the people who have been suppressing the middle class and lower class of the United States and the world for the last few decades,” Hugo said, “then that’s just the cherry on top.”

The money was only part of the appeal. When Hugo, an infantry squad leader in the Army, was stationed abroad in Italy, he said investing in Kansas City-area companies felt like a way to connect with home. After seeing companies like Kansas City Southern and Sprint either leave or concede to mergers, Hugo wanted to help keep AMC in town.

The AMC stock subreddit has over 304,000 members, with thousands of posts and live chats going on 24/7.

“You can find people from literally any background, and nobody’s going to degrade you or talk down to you just because you don’t know something,” Hugo said. “Everybody’s there to lift each other up and teach them whatever they need to know about it.”

While these subreddits have thousands, even millions, of members, posts can look like they’re written in another language. Reddit investors call themselves apes, or degenerates, and flood chats with gorilla icons and memes.

Rocket emojis signify that stock prices are going “to the moon.” HODL stands for “hold on for dear life.” And people with “diamond hands” hold onto stock through dips in the market, while those with “paper hands” sell at the first sign of profit or loss.

In January, when the price of GameStop stock skyrocketed thanks largely to self-proclaimed degenerates on subreddits like WallStreetBets, the so-called meme stock was born — a stock boosted by investors who band together on social media.

Part of the goal of these subreddit forums is to fight hedge funds — sometimes referred to as “hedgies” by investors on Reddit — and short sellers who often bet against the stocks of companies that they predict will struggle in the market.

Many members of the movement are pushing for a short squeeze of AMC’s stock, which would block short sellers. Social media investment movements typically see short sellers as greedy and without value in the market.

“Part of what (social media investment movements are) reflecting is the inability of regulators and market institutions to understand the damage that some of these practices cause,” said Washington, D.C.-based investment analyst William Michael Cunningham, who founded Creative Investment Research. “These people have taken it upon themselves to move markets in a friendlier way.”

But hurting short sellers is just one added advantage for the movement. Cunningham said he sees the movement as similar to crowdfunding in that people are coming together to expose how the market is often manipulated, doesn’t serve the public interest and benefits only a small group of people.

“I think a bunch of people just got together and said, ‘You know what, we’re sick of this. And we’re going to develop a kind of movement that runs counter to that,’” Cunningham said.

The movement also hurts hedge funds in that it adds complexity to the market and gives large financial institutions another thing they have to keep track of, Cunningham said.

“It runs counter to the myth of Wall Street,” Cunningham said. “And it exposes the market manipulation — that it’s a rigged game, there’s no question about it. It exposes some of that rigging in a way that allows small, microscopic investors to make some money.”

AMC embraces and rewards the apes

Adam Aron, AMC’s CEO, welcomed the Reddit investment movement on Twitter and has interacted with shareholders and tweeted out memes.

“After all, these people are the owners of AMC, and I work for them,” Aron said in a news release June 2.

AMC also announced a new program that directly connects the company with shareholders and offers benefits like a free popcorn at theaters this summer. AMC Investor Connect officially launched June 3 with the preliminary proxy statement for the company’s annual shareholder meeting, which will be July 29.

“Many of our investors have demonstrated support and confidence in AMC,” Aron said in the release. “We intend to communicate often with these investors, and from time to time provide them with special benefits at our theaters.”

The company had over 3.2 million individual investors as of March 11, according to the news release. Over 80% of the company was owned by retail shareholders at that time. AMC is the largest theater chain in the world, with 1,004 theaters, according to its website.

The company is also looking to recover from pandemic-era losses. Theaters were closed for most of the last year. Even as some theaters reopen, the ease back into summer blockbuster season has been slow.

The sudden increase in stock price is like a Christmas gift for AMC management, Cunningham said.

AMC also hopes to recover by purchasing theaters from chains that did not survive the pandemic, Aron said on Twitter.

The Beacon requested an interview with Aron or other members of AMC leadership but was told the company is not currently doing media interviews.

Despite fluctuation over the weekend, AMC’s stock price has remained high after its meteoric rise, opening at $52.83 on Monday. Similarly, the price of GameStop stock has remained relatively high after it surged earlier in the year, but some are still skeptical about whether this trend will continue.

Meme stocks have the potential to be profitable, Cunningham said, but it’s difficult to predict which will be successful.

“If you’re able to get a group of 100,000 people to buy stuff, yes, it’s probably going to increase,” Cunningham said. “But it’s tricky. Not everything on Reddit results in movements like this. How do you know which stocks are going to move and which won’t? You really don’t.”

Despite swings in price, AMC investors on Reddit continue to encourage each other to hold.

“The main purpose of this movement is to show the value of a bunch of like-minded people who like a stock and want to put money into it,” Hugo said. “Regardless of how much money these companies have … you can’t beat the power of a bunch of disorganized idiots throwing money at things because they like them.”

Sophia Belshe is a reporting intern for The Kansas City Beacon.