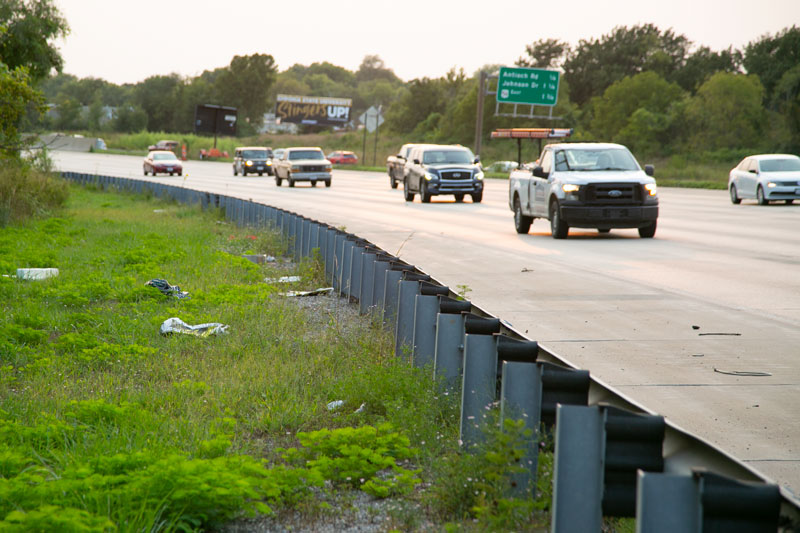 KDOT has hired a company to pick up litter along 50 miles of major highways in Johnson and Wyandotte counties. The department's announcement comes months after local residents petitioned their elected the state and local representatives to address the issue. The problem is not as visible this summer because the growing grass hides it. Above, a stretch of I-35 between Westwood to Lenexa. File photo.

After months of delays over state budget issues to address the growing litter problem along highways in Johnson County, the Kansas Department of Transportation has hired a company to begin cleanup efforts.

Crews will work from 7:30 a.m. to 4 p.m., Monday to Friday. The contract is for one year with an option to extend for three years.

A source of motorist complaints

Litter along major highways in Johnson County has been problematic for several months, particularly along I-35 and I-435. KDOT had said it would address the issue eventually but first had to juggle other priorities, particularly snow removal and general maintenance projects, the agency said.

News of the cleanup contract comes about four months after Lenexa resident Tadd Lucian started a petition asking his city and the state transportation department to address the litter. The petition had 1,000 signatures as of Monday morning.

Lucian said he was happy to learn that the state is taking action.

“I would say I think it’s the right thing to do,” he said. “And hopefully, this decision was made because of the residents of not only Lenexa but of Johnson County putting some pressure on not only KDOT but hopefully our city representatives, our state and local representatives, as well.”

Lucian had tried to organize volunteer trash pickup efforts earlier this year, but he said the state discouraged them, saying it could be unsafe doing so along highways near fast-moving traffic.

“If this petition or if it was the residents of Johnson County that made this happen, it’s a huge win for our area,” Lucian added.

Rep. Jo Ella Hoye, a Democrat representing a House district that covers parts of Lenexa and Shawnee, had also raised concerns about the litter.

She said she supported hiring the cleanup crews.

“I am grateful that KDOT has dedicated resources toward cleaning up the litter that has been noticeably worse lately,” Hoye said. “I hope that we can all contribute to a cleaner environment by making sure that our trash ends up where it belongs. Please don’t litter.”

How litter pickup will work

The contractor IBS will first concentrate efforts on picking up large debris identified by KDOT and the traveling public, which has provided input on where roadside litter is most prevalent.

A routine schedule of right-of-way litter maintenance will follow, supplemented by KDOT maintenance crews, Adopt-A-Highway volunteers and Sponsor-A-Highway partners, according to a KDOT press release.

Initial focus areas will be along I-435 in Johnson County. Then, during the latter part of June, the company will work on U.S. 69 from I-35 to 151st Street and I-635 in Wyandotte County.

In July, IBS will begin working to pick up litter along I-435 in Wyandotte County and I-35 in Johnson and Wyandotte counties.

Matthew Murray, president of Interstate Business Solutions, said his company is excited about the new partnership with KDOT.

“Our experience as one of the nation’s largest continuous roadway debris and litter removal companies will help keep KDOT’s interstates and highways cleaner in the Kansas City area,” Murray said.

Founded in 2017, IBS cleans more than 2,000 miles of interstate in three states, according to a press release. The company hires people with employment challenges, including those who are formerly incarcerated and those experiencing homelessness and/or substance abuse.

The company also says it provides life skills and mentorship to its employees, including setting up bank accounts, finding affordable housing and advancing to higher paying jobs.

What the traveling public should do

KDOT asked the traveling public to be cautious when traveling in the areas — which will be considered highway work zones — and to be on the lookout for:

Additionally, one truck will send out utility vehicles to be used by two maintenance crews consisting of four to five people.

KDOT and IBS will post roadside safety signs every five miles to make drivers aware of the litter removal.

Road construction projects and other updates can be found at kandrive.org or by calling 5-1-1.