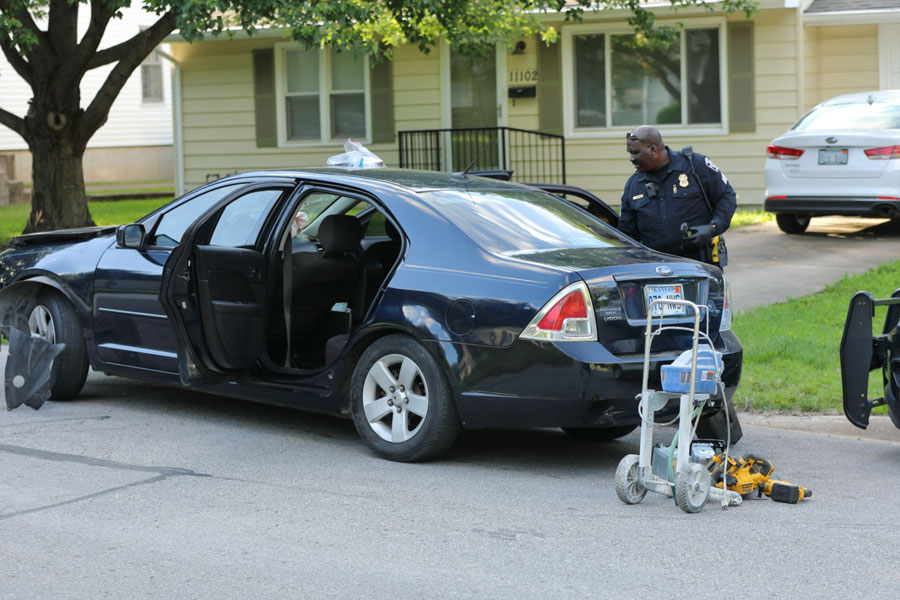 A Shawnee police officer inspects a crashed car abandoned by three men near 69th and Nieman Friday evening. Investigators could be seen removing power tools and electronics from the vehicle, some of which can be seen on the street behind the car above. One suspect was arrested. Photo credit Mike Frizzell.

Officers were called to 69th Street and Nieman Road for a reported armed disturbance just before 5:30 p.m.

Recorded radio traffic indicates officers were advised that three men ran from a car after a crash on Nieman Road. One of those men was reportedly armed with a rifle.

At least one of the men ran through a backyard.

The car was abandoned on 69th Terrace just west of Nieman Road.

According to recorded radio traffic, one officer arrived in the area and attempted to contact a man near 71st Street and Flint Street. The man ran from the officer into another backyard.

Police confirm one person was taken into custody in the neighborhood, while two others had not been identified or located.

Officers set a perimeter in the surrounding neighborhoods as a police K-9 unit searched the area. The search lasted about an hour. No other suspects were located.

After the search, officers could be seen removing and photographing power tools and automotive electronics from the suspect vehicle’s back seat.