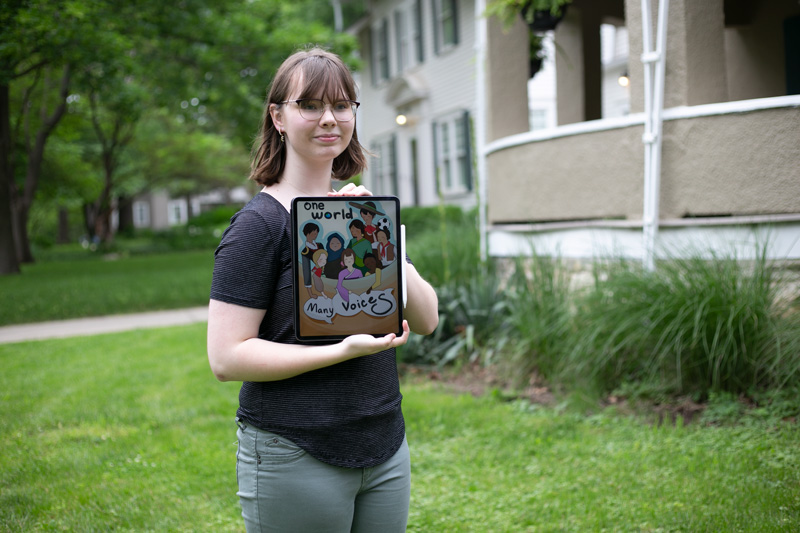 For Hannah Lank, a rising freshman at SM North, drawing means so much. It’s a way to express yourself, to release emotions and, in her case, to win a competition.

A lifelong Johnson County native, Lank attended Santa Fe Trail Elementary and recently finished eighth grade at Hocker Grove Middle. While at Hocker Grove, she won the middle school division of the Kansas World Language Association language arts poster contest for creating a digital design based on the theme, “One World, Many Voices.”

Outside of drawing, Lank enjoys walking her cat Cinder and playing video games, most recently Genshin Impact and Legend of Zelda: Breath of the Wild. She’s already thinking about career plans, possibly in the medical field. She lives in Mission and has two cats, Max and Cinder.

I first started getting into drawing when I was around preschool. They would hand out crayons and paper, and I didn’t really play much with toys, I just kinda sat there and drew.

It started out as potato people with sticks coming out in random spots, but as I went through elementary school, I started doing it more in class, just doodling on my papers. Of course, I still listened, but it just sort of helped me focus, have something to keep my hands busy.

And then, when I went home, I would draw a lot, and eventually, I started experimenting with maybe some paints, or maybe some markers, and then around, I’d say, when I was 11, I got this iPad with a stylus, the iPad pencil. And I started getting into digital art.

I fell in love with it because I found it a lot easier, and also it was a bit easier to listen to music because I could connect directly to the iPad. It was also a lot easier to keep all my art in one spot.

So with the poster, I thought, why not? I could give it a try, I’m an artist. There’s an art contest. Why not?

I find that when representing people of different ethnicities, it’s very easy to fall into the Americanized stereotypes like maybe Mexicans and sombreros and with mustaches. The sombreros are part of their original ethnic heritage, but constantly putting them in one creates a negative stereotype. So, I placed the people in my poster in their original ethnic clothing to try to stay true to their cultures.

I believe there’s one from Brazil, there’s one from Japan, one from Germany, one from India, one from Mexico. I think the one on the leftmost is from Spain, and then, oh gosh, I don’t remember their countries, I think I just wanted to get more so the areas in there.

So I started out with just the basic sketching and then eventually filled in maybe more details. Just getting basic body types and such. And then from there, I went to the clothing. I put them more so at random than anything. I didn’t really have any specifics in mind when I created the poses originally. They sort of just fell into place.

When I started out with the base, I was thinking more so, ‘OK I’m going to incorporate different people in different places. I don’t know exactly where.’ So then I started just looking up ethnic clothing from whatever I could think of, and sort of put them in wherever I saw fit.

I rarely ever finish anything because I like starting projects rather than finishing them (laughs). It’s just so much easier, so much more fun. I do find if it’s a bit smaller or a bit less complicated, I can finish it.

I’d say the thing that inspires me most is maybe Pinterest. I go on there a lot. I have so many pins. And also just going outside, seeing different colors, how things blend together. Even lighting, how light falls on different objects can be pretty cool.

If you are an artist, I’d say the biggest thing is to use references. Whatever you like, just put it on your canvas so that you can look to it and draw from that. I would also say you do not have to settle on a certain style, and it is perfect to just experiment with whatever you want to, because you should not force yourself to go with one certain path if really you want to try multiple different ones.

I’d say when trying to understand an artist, try to look a bit deeper into some of their more emotional pieces, but also understand that if it is just a hobby, it might just be a cute little drawing that they wanted to do.

Artists are allowed to just have art as a hobby, and every little mistake they make does not need to be criticized, because that may make them feel worse, and you should always ask before saying why does the head look like that, or why are the eyes facing different directions or something like that. Because they could be doing it just to release an emotion or just to be having fun.

Also, do not compare yourself to someone’s art. Try not to say, wow I could never draw as well as you can. It’s actually pretty harmful, and it makes the artist feel bad and guilty for being able to draw that well.

The artist themselves, they don’t want to make other people feel bad when looking at their art, or make them feel like they can’t do anything, or make them feel bad about themselves because of their art. They’re wanting to inflict an emotion, possibly, but it’s never to feel bad about the other person. So when you say something like, I could never be that good, how are you so good, or I could never, something like that, it makes the artist feel a little bit bad about maybe showing you their work.