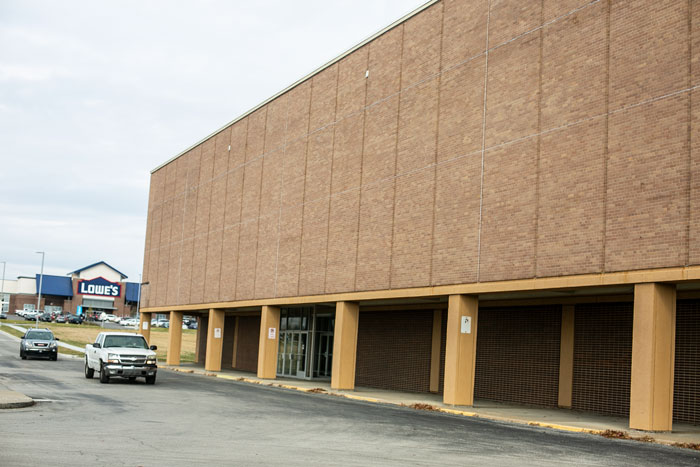 The former Sears building has been vacant since late 2017. Originally, developers proposed a four- to five-level apartment building on part of the site, but residents in a neighborhood nearby raised concerns. A revised site plan no longer includes the apartments, among other changes. File photo.

A 300-unit apartment building that had prompted neighbors’ concerns is no longer part of the redevelopment plan for the former Sears building near 97th Street and Metcalf Avenue in Overland Park.

The removal of the planned multi-level building, which was near a neighborhood to the south and east of the property, is part of several significant changes that are being proposed for the nearly 19-acre property on the south end of the site once occupied by Metcalf South Shopping Center, which was mostly demolished in 2017.

The former Sears building is the only remaining structure from the mall. The north end of the old mall tract is now taken up mostly by a Lowe’s home improvement store at 95th and Metcalf.

In a presentation for neighbors Tuesday, Henry Klover, president of Lenexa- based Klover Architects, outlined changes in the site plan for the southeast corner of 97th and Metcalf.

Klover presented a plan Tuesday that has several major differences from past proposals for the site, including:

Meanwhile, pads for other restaurants have been somewhat reconfigured.

There are also plans for a coffee shop and a gas station/convenience store. Klover said he could not mention the name of the gas station, but materials sent out to the neighborhood showed a picture of a Quik Trip.

Although the plans for the apartments drew considerable interest from neighbors when proposed two years ago, only one neighbor attended the virtual meeting on Tuesday, and that person did not speak or ask questions.

The new plan will still have to go through the city planning department for rezoning, now that the apartments are not part of the plan.

Klover said he hopes to have permits in order this fall.