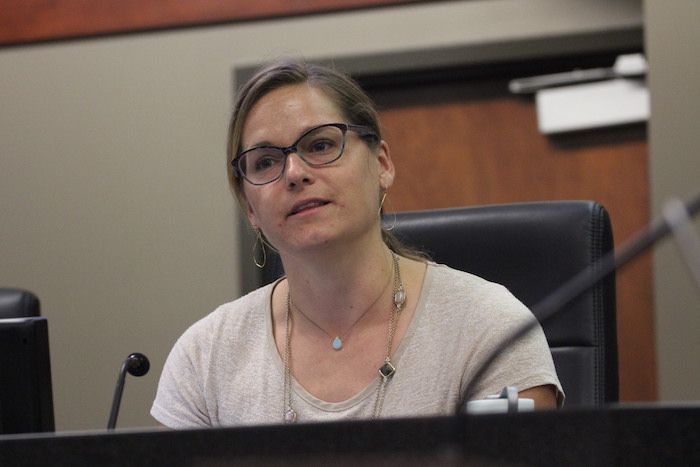 Shawnee Councilmember and current Council President Lindsey Constance won't seek reelection and will focus instead on her role as president of Climate Action KC, a nonprofit she co-founded to address climate change issues in the Kansas City metro area. File photo.

Shawnee City Councilmember and current Council President Lindsey Constance announced Tuesday that she has decided against seeking reelection for her Ward 4 seat.

Constance, who is also an educator at Christa McAuliffe Elementary in Lenexa, says she wants to focus more efforts on her role as president of Climate Action KC, a nonprofit she helped found which aims to mitigate the regional impacts of climate change

“It’s been an honor to serve the residents of Shawnee and to work alongside my fellow councilmembers and city staff who make Shawnee a great place to live,” Constance said. “In my work with Climate Action KC, I will continue to advocate for the people of Shawnee and the region by bringing elected officials and community leaders together to reduce emissions, strengthen our economy and promote public health.”

Constance was first elected to the Shawnee City Council in 2017 and was named council president in December following a coin flip. She will serve the remainder of her term, which ends in January 2022.

Bryan Behgam, a spokesperson representing Constance, said she has no plans to run for any public office for the time being.

Constance said she is endorsing Kevin Makalous to fill the Ward 4 seat she is vacating.

Makalous previously served on the USD 232 Board of Education in De Soto. Constance will serve as treasurer in Makalous’ campaign for Shawnee city council.

Makalous, who works as a financial adviser for Edward Jones, said he’s glad to have Constance’s support.

“She has been a strong public servant and will continue to make a lasting impact through her work across the region,” Makalous said.

Makalous will face Jacklynn Walters in the race for Ward 4. Walters’ campaign website says she is a mother to four children with experience in banking and the nonprofit sector.