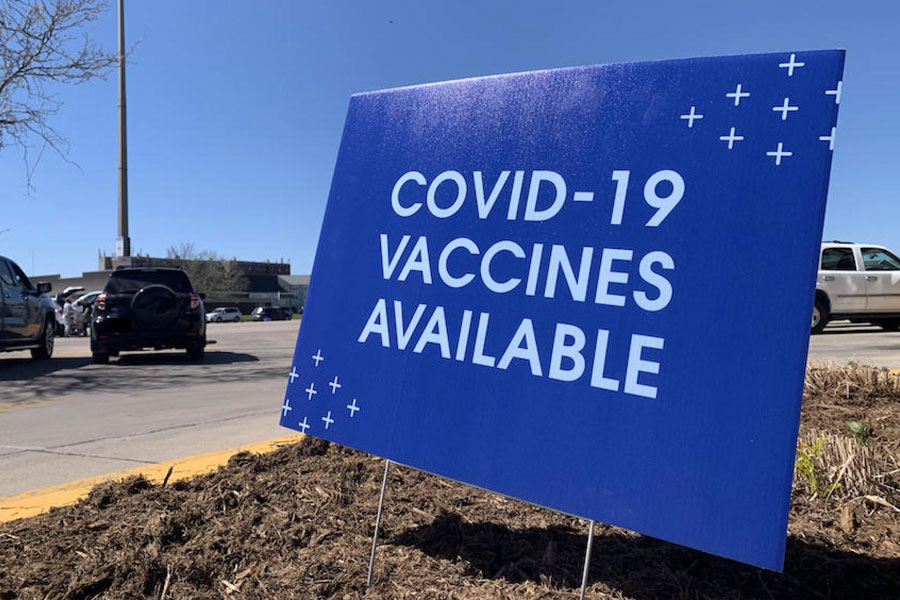 More people in Kansas appear willing to get inoculated against COVID-19, but those who remain reluctant are becoming even less willing to consider the shots, a new survey finds. Above, a sign advertises vaccine availability outside a grocery store in Hays. Photo credit David Condos/Kansas News Service.

New survey results show that reluctance to get COVID-19 vaccinations has dropped in Kansas.

At the same time, worries about vaccine side effects seem to be increasing.

Federal statistics analyzed by the Kansas Health Institute, or KHI, show that roughly 22% of Kansan adults reported feeling uncertain about getting the vaccine in April. That’s down from 30% in March and 47% in January. (KHI, like the Kansas News Service, gets significant support from the Kansas Health Foundation.)

It’s the first analysis of data from the US Census Bureau’s Household Pulse Survey since Kansas opened up vaccine access to all adults at the end of March. And it shows that more than three quarters of Kansas respondents had either gotten their shot or planned to do so.

“We already see that people who are excited about the (vaccine efficacy) data are getting the vaccine,” said KHI analyst Emily Burgen. “We’re mostly concerned about those who are uncertain.”

Burgen said that the next phase of vaccination efforts should give people space to ask detailed questions and take the time to address their specific concerns in a nonjudgmental way. And as more of the vaccine rollout shifts into the doctor’s office, that could offer people more opportunities to have one-on-one conversations with a trusted health care professional.

“To me,” Burgen said, “it comes back to sharing factual information and having those conversations.”

Gretchen Homan, a professor at the University of Kansas School of Medicine in Wichita, said that the best route to addressing a patients’ worries about the vaccine is often the most simple and direct one.

“Listen to what they’re concerned about, talk about what you’ve learned and … explain why it’s so important,” Homan said. “They just want to hear confidence from you.”

But as the pool of people still hesitant about the vaccine shrinks, the barriers to reaching those who remain unconvinced get bigger. The number of survey respondents who said they were concerned about possible vaccine side effects increased by 15 percentage points compared to the previous month, from 49% to 64%.

The survey also reported increases in the number of people who listed a lack of trust in the government and a belief that COVID-19 is not a serious illness among their reasons for vaccine reluctance. Roughly half of respondents said concerns about vaccine safety were keeping them from getting the shot.

And the number of people who may be open to learning more about the vaccine also appears to be dwindling. Of the 22% of people who remain uncertain, roughly 8% said they would definitely not get a vaccine — a figure that has remained steady since January.

Some of the concerns highlighted in the survey, however, could be more easily addressed. Roughly 7% of people said they hadn’t gotten the vaccine because their doctor had not recommended it, which is something Emily Burgen of KHI said many doctors might not have thought of. And nearly 10% listed the cost of the vaccine as a barrier.

“That’s just a public health messaging (issue),” Beugen said. “The cost to (get) the vaccine is free.”

The survey also shows the impact that the Johnson and Johnson pause had on the public’s view of vaccine side effects.

The Centers for Disease Control and Prevention and the Food and Drug Administration recommended that health agencies temporarily stop giving out that shot in mid-April to study a rare blood clot condition that showed up in six out of 6.8 million people who had received that version of the vaccine.

Federal agencies lifted the pause 10 days later after determining the vaccine was safe to use. But Bergan said the survey, which was conducted both during and after the pause, shows that it had a lasting effect on people’s ideas about the vaccine’s effects.

That’s further complicated by common misunderstandings about the difference between side effects and adverse effects.

Adverse effects, like the blood clots that paused the Johnson and Johnson vaccine, have been very rare. And Burgen said that most side effects are natural signs of the body’s immune system reacting to the vaccine in the way it’s supposed to, just like when someone’s arm hurts after a flu shot.

But stories about people feeling sick after their shots have gotten an outsized amount of social media attention compared to the number of people who actually experience them. That could lead other people to be afraid of getting their own shots.

“Are we elevating those side effects,” Burgen said, “and creating rhetoric around the vaccine that maybe shouldn’t be there?

Gretchen Homan, who joined Burgen for a presentation to medical professionals from Kansas, Nebraska, Iowa and Missouri, agrees that messages about the vaccine’s safety and side effects need to be more straightforward. She said that the risk of experiencing fatigue, fever and chills after the shot is small compared to protection from a potentially fatal virus.

“The COVID-19 vaccines have been developed under the most intensive safety monitoring in U.S. history,” Homan said. “We know it’s safe, and we know it works.”

Burgen, the KHI analyst, said that doesn’t mean concerns about vaccine side effects aren’t valid. For example, some people may not want to risk feeling ill after their shot if they can’t take a day off from work or if they need to care for a loved one.

“It’s a really tough decision for some people to make to get the vaccine,” Burgen said. “And the goal is not necessarily … for someone to be excited about getting the vaccine by the end of the conversation, but kind of starting to move the needle closer.”

But if sizable pockets of people remain unvaccinated, it could lead to future outbreaks in Kansas — particularly in the state’s rural areas, where vaccination rates continue to trail urban centers.

Burgen said she hopes that, as more Kansans safely receive the vaccine and more doctors are able to administer it, word-of-mouth promotion will slowly help more people feel comfortable getting their shot.

David Condos covers western Kansas for High Plains Public Radio and the Kansas News Service. You can follow him on Twitter @davidcondos.