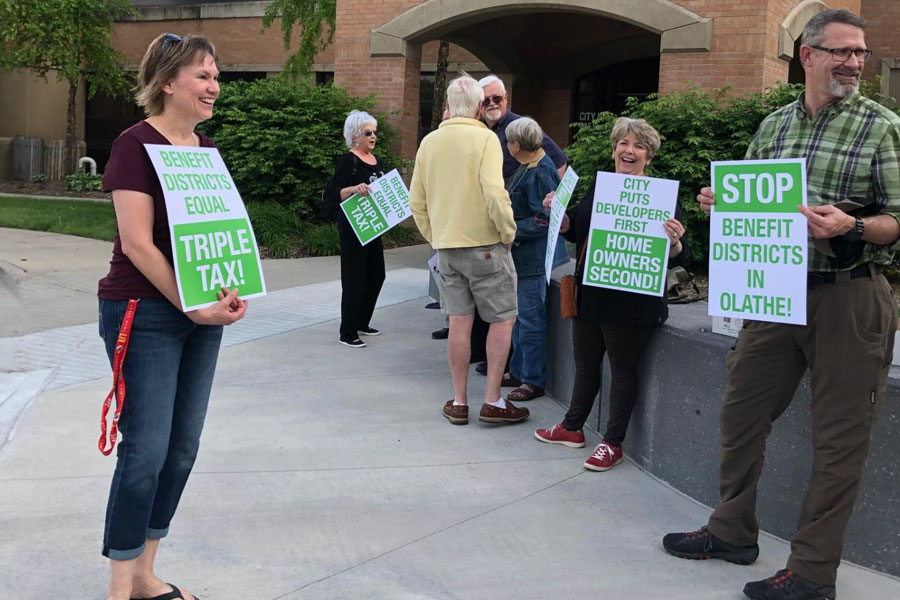 Residents of Cedar Creek, a subdivision in northwest Olathe, gathered outside last week's Olathe City Council meeting, voicing their opposition to the city's proposed use of two special benefit districts the residents say would have stuck them with tens of thousands of dollars in extra costs in order to help fund new roads to their neighborhood. The developer ultimately dropped the plans in favor of benefit districts that do not assess the homeowners. Photo credit Roxie Hammill.

Residents of Cedar Creek, one of the Kansas City area’s most upscale neighborhoods, recently won a victory when developers withdrew their plans to use an obscure financial tool to help pay for new roads to the area.

The homeowners say the use of so-called special benefit districts to fund the infrastructure improvements would have stuck them with tens of thousands of dollars in out-of-pocket costs.

The developers say the roads are necessary for easier access to Cedar Creek but that they were “strong-armed” by the city into using the benefit districts as a way to pay for it.

Cedar Creek residents will still get some long-awaited roads connecting them with the rest of Olathe and now won’t have to pay into two special benefit districts, as was originally proposed, after plans for the districts were withdrawn at the Olathe City Council earlier this month.

But the residents say they still have lingering concerns.

They say Olathe needs to stop relying on the special benefit districts as an infrastructure funding method that can result in surprise assessments for homeowners that, in some cases, could end up equaling the price of a college loan.

“They’re trying to take money away from the middle and upper class homeowners and give it to one developer,” said Nick Payne, the administrator of the Facebook page, “Stop Benefit Districts in Olathe KS” and one of the organizers of a petition with that aim.

The city, meanwhile, counters that benefit districts are a way to keep new development paying for itself, and that the controversy over the Cedar Creek districts was an anomaly.

What is a ‘special benefit district?’

Not every city uses benefit districts. In fact, several Cedar Creek residents who were at the recent city council meeting to protest said they’d never heard of them before the tool was proposed as a way to pay for new roads to their subdivision.

“A lot of people moving to Olathe aren’t aware that there’s a creature called a benefit district,” Payne said.

Other members of the resident opposition group say they think Olathe is alone among regional municipalities in using them.

However, city spokesperson Tim Danneberg said such benefit districts are in use elsewhere.

A typical benefit district might start with a developer’s petition.

Under Kansas law, a landowner — like a developer — can ask the city to approve a benefit district if he or she owns more than half of the land within a district’s proposed boundaries.

The cost of the improvement would be bonded, with each separate landowner within the proposed district’s area paying a share of the costs, based on the square feet they own.

One of the districts recently discussed in Olathe would have assessed $1.015 per square foot.

A half acre lot, then, might be charged a $22,106 assessment, which the homeowner could pay up front or in installments over 20 years, at the interest rate carried by the bond.

Benefit districts have proved a rude surprise to Cedar Creek homeowners who say they already pay enough in property taxes and never anticipated paying thousands more on top of the home prices they already negotiated.

Carl Little was one of those residents stunned by the latest benefit district effort.

He and his wife moved to Hidden Lake, a smaller subdivision within Cedar Creek, last November with no notion of the assessment that would later be proposed.

Little, who says he is about a year away from retirement in a career in sales, said would have been included in two overlapping districts. Had they been approved, the Littles would have had to figure out how to pay a $26,978 assessment.

Cedar Creek resident Larry Molder said the effect on long-established residents is one reason he’s pushing the city to get rid of the funding method.

“The very people coming out here (to protest) are retirees on fixed income who do not want to be blindsided by some BS tax that isn’t going to benefit them at all,” he said.

Cedar Creek, which sits just west of the junction between Kansas Highways 7 and 10 in northwest Olathe, was conceived in the 1970s and 1980s, when the Ash Grove Cement company began planning for a resort community in what was then rural Johnson County.

The city began annexing the area in the 1980s. At the time, what roads there were, were two-lane asphalt or gravel.

Cedar Creek Development bought it in 2006 and has since developed it into a suburban Shangri-La of sorts. On its website, Cedar Creek advertises itself as “resort lifestyle living at its best in the Kansas City area’s largest master-planned community.”

Waterfalls grace the subdivision’s winding boulevards and lake, with a network of golf cart paths throughout the area. The median home price here in April, according to Realtor.com, was $565,000.

But the roads are still a problem.

The development opened with one main entrance at Cedar Creek Parkway and K-10. But to date, connections to other arterial roads are slim. A nearby connection from the main Cedar Niles Road to traffic on College Boulevard is facilitated by a sharp turn onto a shoulderless and hilly section of West 111th Street that passes by the end of a grass airstrip.

It has long been the intent of developers to get some better connections.

In 2017, Cedar Creek Development Company advertised in the Kansas City Star that it was seeking approval for a benefit district that would extend Cedar Creek Parkway and could result in a new grocery store at the K-10 corner. Construction was to have concluded in 2020.

John Duggan, development lawyer for Cedar Creek, said this month that shopping isn’t the main reason the developer wants the roads. Better connections will help emergency responders get to the neighborhood, he said.

The issue came to a head in a lawsuit filed last September by the developer against the city.

In it, the developers said they’d been led to believe since the early days of Cedar Creek that the city was going to pay “its share of the cost” for building the arterial roads and main trafficways.

The plan to use benefit districts was an attempt to avoid its obligations, the suit argued, and amounted to “illegal strong-arm tactics.”

But the suit was dismissed from Johnson County District Court on technical grounds. It was also dismissed on appeal last month, according to court documents.

Benefit districts have been used successfully about 70 times throughout Olathe’s history and are generally a good way to have development pay for itself, Danneberg said.

He added that if the districts weren’t used, the cost of the streets would just be figured into home prices. In the end, the districts may be a better deal for residents because they offer better interest rates, he said.

Ideally, all the landowners in a district would want the improvements and would agree to pay for them. It’s unusual for districts to spark as much opposition as this one has, he added.

Problems arise when there’s a gap between when the developments are created and when assessments begin, and that’s happening at Cedar Creek.

A brand new development may start with the developer owning all or almost all of the land. But as houses are built and sold, the developer’s portion begins to shrink.

At that point, the benefit district has potential to affect people who may not support it. But under the law, the development company still has the right to ask for a district as long as it owns more than half.

Cedar Creek is more than 20 years old but is still not fully built out. Duggan, the Cedar Creek developers’ lawyer, estimated about 300 acres remain undeveloped.

Nevertheless, the residents won this round. The developer withdrew the two benefit district proposals and substituted new ones that do not assess the neighbors.

The neighbors don’t plan to drop the matter, though.

They’re still holding meetings and even looking toward the next municipal election. Mostly, they say they worry that the benefit district requests will keep coming and people will eventually get tired of fighting.

Resident Steve Daniels is thinking ahead to the long-range plan for the area and future expansions.

“My question to the city council is how many times can you do this? If I keep my house will you do this twice? Where does it ever stop?” he said.

Molder, another resident, concurred. One day, people will just get worn out, he said.

“At some point apathy is going to get the best of us,” he said.