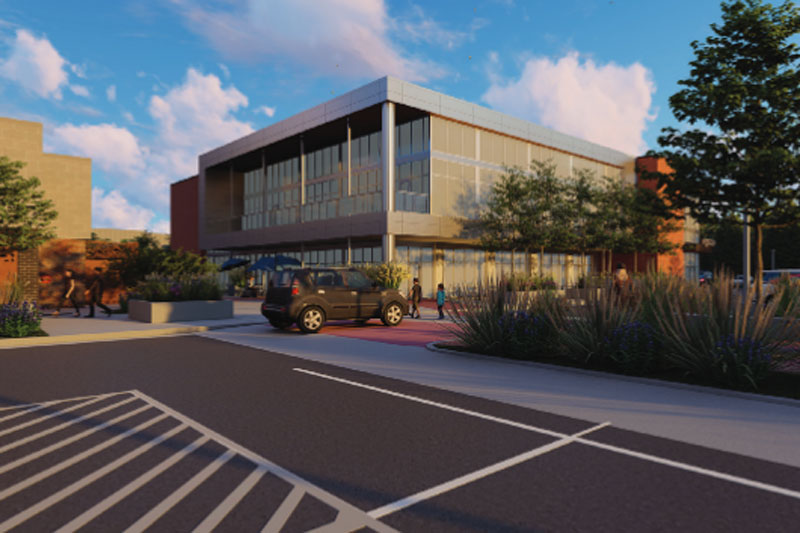 Developers of the Ranch Mart North redevelopment say they've put a premium on outdoor seating patios, pedestrian walkways and astro-turf lawns areas. Above, a rendering of the revamped project, which is set to open this summer.

Ranch Mart North’s redevelopment is taking shape — and while it’s on track for a summer 2021 opening, developers say the project’s finishing touches could still be happening int this summer.

The $47 million project to revamp the shopping center on the northeast corner of 95th Street and Mission Road includes the addition of a two-story, mixed-use building, facade updates for all tenants, a walkway connecting the front and back of the development and other improvements for pedestrian safety.

Developers say most of the primary work will be completed by this summer, but work on murals, for instance, could take longer to complete.

Trip Ross with Cadence Commercial Real Estate said the company is shooting for “best in class” with the Ranch Mart North renovations.

As someone who grew up in the area, and has kept his roots nearby, Ross said there’s a particular focus on safety with the addition of sidewalks and more narrow roadways.

“I live here, my kids go to school next door, so making [Ranch Mart North] safe and attractive is a priority,” Ross said.

Most of the development’s future new tenants are not publicly known at this time.

The only new tenant that has been publicly announced is Meat Mitch, a restaurant created by the owners of Char Bar KC, which is set to occupy the space next to Cosentino’s Price Chopper.

Ranch Mart North will also feature a number of outdoor spaces such as large restaurant patios and a lawn area with astro-turf that’ll serve as a community amenity, something Ross said was in the plans pre-pandemic.

While physical office spaces have taken a hit during the pandemic, Ross said they have received interest from some potential tenants for the second-story office space.

For a 60-year-old shopping center to turn into a mixed-use environment is abnormal for commercial real estate, which is the goal, Ross said.

“This isn’t a typical suburban building by any means,” Ross said. “The goal here is to create something unique.”