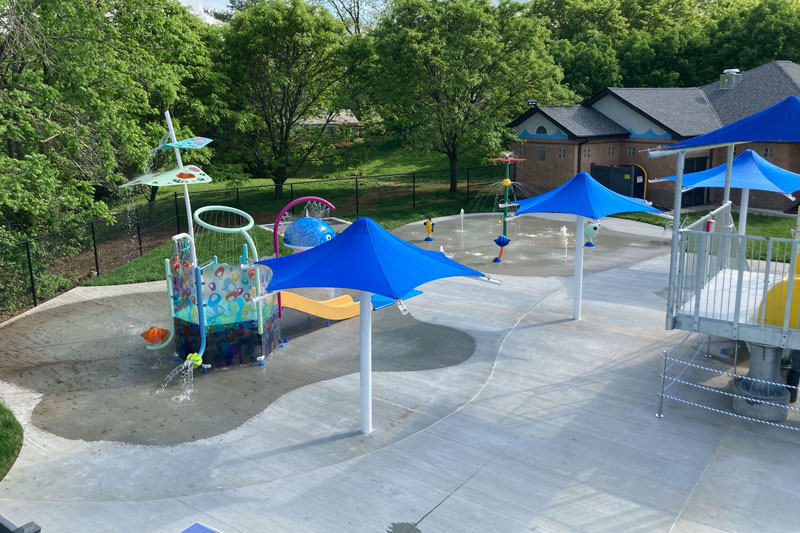 The new and improved Roeland Park Aquatic Center is set to open Saturday, May 29.

And while the city says it’s excited to unveil major refurbishments nearly two years in the offing, the revamped pool will be open fewer days than in pre-COVID years because of trouble in finding enough lifeguards, an issue bedeviling other Johnson County cities.

Now, the aquatic center is set to finally reopen after undergoing a $1.6 million renovation that includes new slides, shade structures, a climbing wall and a splash pad.

Mayor Mike Kelly told the Shawnee Mission Post the city is thrilled to be opening the newly renovated pool.

“After a year like we’ve had, to have something positive that’s been growing in the background and be able to reintroduce that service to our residents is a great joy to the city,” Kelly said.

Summer pool passes are not currently available since the pool will be operated on a limited schedule, according to the release.

Instead, patrons are able to buy day passes which are $6 for residents and $8 for non-residents.

Still, the city will be operating the aquatic center in a limited capacity this summer due to a metro-wide lifeguard shortage, according to a city press release.

Roeland Park Aquatic Center will be open this summer on Saturdays, Sundays, Tuesdays and Thursdays from 12 p.m. to 7 p.m.

It will also open on Memorial Day, which is Monday, May 31.

Before the pandemic, the Roeland Park Aquatic Center was open daily during the summer, a city spokesperson said.

In an attempt to attract teens to serve as lifeguards, Roeland Park has increased the hourly wage for lifeguards to $12 an hour from $10 an hour.

The city is still advertising for lifeguard positions in large, bold type on the aquatic center’s web page, saying “no experience or lifeguard certification required.”

“The city hopes to be able to open full time as more lifeguards are hired,” Superintendent of Parks and Recreation Tony Nichols said in the release. “We are continuing to recruit and hire as the start of pool season nears.”

It’s been an issue this spring in other northeast Johnson County cities, too.

Prairie Village shortened its daily schedule by and hour for its pool this summer and has also tried recruiting younger teens to fill lifeguard positions.

Earlier this month, Fox 4 reported that Shawnee was short the number of lifeguards it needed to fully staff its main pool and water park.

The shortage is playing out in communities across the country, and the American Lifeguard Association says a number of factors could be at play.

The group says ongoing COVID-19 restrictions have made it more inconvenient to get trained and certified. The pandemic has also made it harder for college students, whom typically make up a large proportion of lifeguards, to come home to work for the summer.

And since many community pools were closed last summer, a whole crop of teens didn’t break into the field and are not returning this summer.