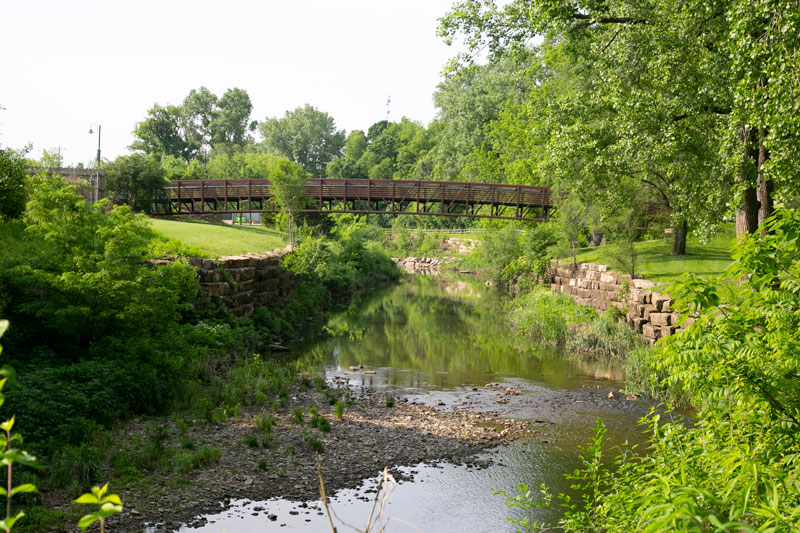 Downtown Merriam could be removed from the floodplain if a $43 million appropriations request — submitted by U.S. Rep. Sharice Davids — is approved before the new fiscal year begins on Oct. 1. The request would fund more than 6,800 feet of flood wall and more than 3,300 feet of levees.

The city of Merriam could receive $43 million in federal funding for the first steps of a project that would remove its downtown from the local floodplain — potentially addressing an issue that’s stymied redevelopment plans for the area for years.

As part of the annual federal appropriations process, U.S. Rep. Sharice Davids, a second-term Democrat, has requested the funding for “preconstruction, engineering and design of the Upper Turkey Creek Flood Risk Management Project,” according to her office’s appropriations request.

Davids’ office said the project would be “impactful in terms of improving safety and resilience in the floodplain” as severe weather events become more frequent.

Additionally, Davids’ office said The Seven Levees project, which the upper Turkey Creek project is a part of, has been a long time priority for Kansas.

The money Davids is requesting would, among other things, go towards building more than 3,300 feet of levee and more than 6,800 feet of flood walls, reaching a height of up to 6.5 feet.

The $43 million funding will be considered for approval by the House Committee on Appropriations, which will consider numerous requests from members of congress before the new fiscal year begins on Oct. 1.

Flooding along Turkey Creek has long posed a major challenge to Merriam, threatening property and businesses in the area and scuttling the city’s efforts to move forward on redeveloping downtown as it remains in the floodplain.

In recent years, the city has pressed the U.S. Army Corps of Engineers to address the issue with little luck.

City Administrator Chris Engel said the city is grateful that Davids recognizes the impact that building a flood wall system could have on not only downtown Merriam but on any Johnson County municipality touching Turkey Creek.

While micro breweries, coffee shops and other businesses have expressed interest in wanting to open in downtown Merriam, Engel said they head to other nearby communities because of the risks of being flooded in Merriam.

“We think those [kinds of businesses] would be a great amenity that would create foot traffic for existing businesses and would give people a reason to come downtown,” Engel said. “It kind of creates a snowball effect for future development — none of those things can happen as long as the floodplain still exists.”

Councilmember Whitney Yadrich tweeted that Davids’ request for funding is a “big step” towards potentially removing downtown Merriam from the floodplain.

Holy wow. This is a big step toward removing downtown @MerriamKS from the floodplain! Thank you @RepDavids for recognizing how important the Turkey Creek project is for our local economy. https://t.co/ANF0slvVpR pic.twitter.com/qF3xRFlSDF

Yadrich said she’s excited to see the request move through the appropriations process.

“Removing the floodplain has felt like a hollow effort for so long, especially given the project’s reliance on federal funding,” Yadrich said. “Being on the request list alone is validating — that the positive impact this project will have on our local businesses, community and environment is finally being recognized.”