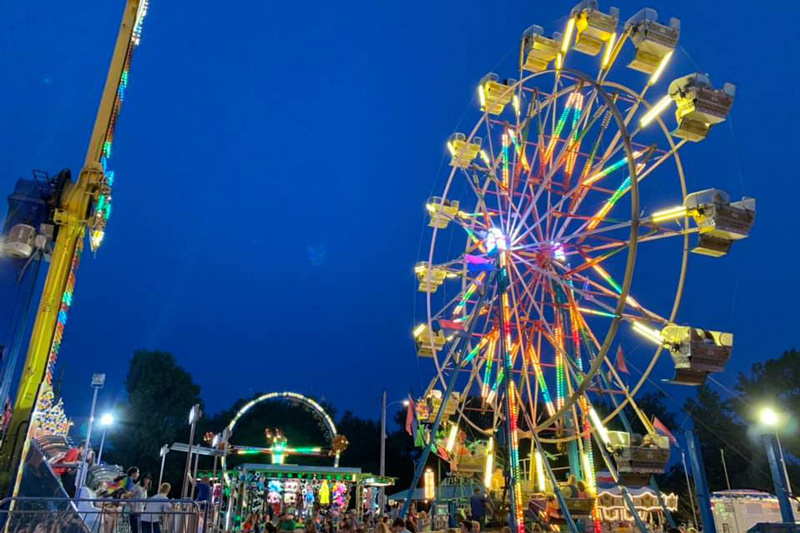 Local company Evans Midland Empire Shows is bringing a carnival back to Johnson County this summer.

Owned by the Evans family for four generations, Evans Midland Empire Shows Inc. is based in Plattsburg, Mo., and has been in operation since 1947. The late John Evans, who died in January 2020, had inherited the company that his grandfather built.

Last year was tough on entertainment businesses like Evans Midland Empire Shows, which operated no carnivals in 2020 during the COVID-19 pandemic.

While not at risk of permanently closing, business was tough, said Peggy Evans, John Evans’ widow, who handles tickets, reservations and bookkeeping.

“We’re just excited to be back in Johnson County,” Peggy Evans said. “People are just very, very excited to get out, it’s great that our events are all outdoors, so there’s not a lot of worry. We do have hand sanitizer and we take precautions, but we’re so glad that the corner has been turned and most people are getting vaccinated.”

Evans Midland Empire Shows was going to make an appearance at Old Shawnee Days, but that annual festival was canceled for the second year in a row. Since then, the business had been looking for a location to set up in the Johnson County area.

Peggy Evans says the last time Evans Midland Empire Shows made an appearance in Lenexa was during Lenexa’s Centennial Observance in 1969.

Next month, the carnival in Lenexa will feature 13 rides such as a Ferris wheel, merry-go-round, Rock Star swinging ride and several others, including children’s rides such as teacups and a giant slide.

The carnival will also have a variety of carnival games and a food trailer and concession stands serving carnival food such as funnel cakes and cotton candy.

The carnival will also have wash stations and portable restrooms and more than 200 parking spaces on site.

This week-long carnival is not in conjunction with another event, Peggy Evans added. However, she and her son, Andrew Evans, are planning to bring the carnival to De Soto Days during Labor Day weekend as well.

The carnival will have signage encouraging social distancing and masks.

The Lenexa City Council on May 18 voted 7-0 to approve a special event permit for the carnival. Councilmember Joe Karlin was absent.