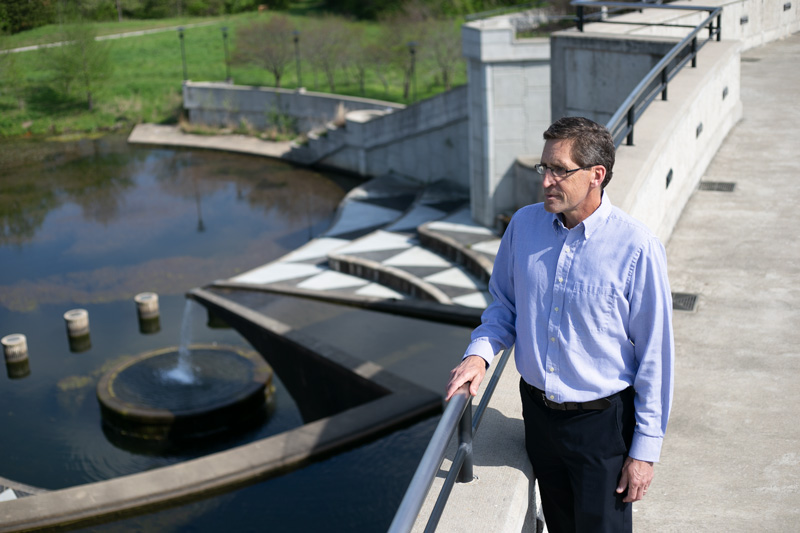 Thanks to efforts by Stormwater Engineer Tom Jacobs and the Lenexa city staff, Lake Lenexa was recently named one of the top four best environmental water projects in the United States.

As part of Lenexa’s Rain to Recreation program, Lake Lenexa is a 35-acre deep-water lake at Blackhoof Park. Lake Lenexa features a dam and spillway to assist with flood reduction, and the lake itself is now a natural water habitat and hub for many recreational and educational opportunities. Plus, it has a fairly breathtaking view.

Originally from Minnesota, he earned his civil engineering degree at South Dakota State University in Brookings and, after working for some time in St. Joseph, Missouri, and the Kansas City area, he earned his master’s degree in water resources at the University of Kansas. Much of his work has been toward water resources. He actually got his start in Lenexa in 2001 to help begin the city’s Rain to Recreation program.

He lives in Parkville, Missouri, with his wife, Sandy Jacobs. They have three grown children and a rescue cat named Cali. The couple is building their dream home in Platte City, Missouri.

Everything you see here has a meaning.

Lake Lenexa is our first regional stormwater facility that we did, and we dedicated it in 2006. We looked at the entire 600-acre watershed that comes to Lake Lenexa. Future development’s going to cause more runoff and more pollution. How can we fix that, you know, before it becomes a problem?

Lake Lenexa is a large, basically reservoir that will store the stormwater of the 600 acres that’s up above the lake. So as all that land develops and all the rooftops and roadways start discharging water quickly into the streams, this is going to store that water and keep it from flooding downstream… and down into the creek. This is Coon Creek.

Now there’s a lot of development going in as we anticipated.

Just right across the road from the lake, there’s a single-family subdivision going in multi phases right now. Farther upstream within this watershed, there’s a new development with townhomes. I know there’s off-and-on talk about a big retail center out toward K-7 and Prairie Star Parkway, and that all drains to this spot and ultimately beyond this spot, where the flooding problems would occur.

Open space is important, one, to just help mitigate so much stormwater runoff in the context of the stormwater program, but it’s also important for just people’s peace of mind. If they can have a place to get out to where they’re not on the road, and they’re not on the sidewalk, but they’re just off in nature, it’s really good for a person to do that.

The thing that struck me first when we made this is there was nothing here until we built this dam and built the lake and the trails, and then after that, people just use it constantly. The parking lot’s always full, there’s always people walking the trails. It just feels really good to create something that people love.

It’s actually an old farm site, is what it was. Where our boat ramp is, there’s a shelter, and that shelter has an old fireplace with it, and that’s the original fireplace from the farmhouse that used to sit out here.

Interestingly, there was an old gas injection well in what is now the bottom of the lake that we had to cap before we could build the lake. Who would have thought that there was a gas injection out here in the middle of nowhere? Because Monticello Road at that time — it’s now an improved roadway — it was just a small, two-lane windy road before we built the bridge out there and everything.

I think what really helped us [in the national competition] is that it’s a fully thought out watershed project. So we’re not just building a lake, but we built wetlands and bioretention cells to clean the water before it comes into the lake. We also protected a bunch of the stream corridor coming into the lake, and coming into a tributary downstream from the lake.

We purchased the stream corridor so that no development can encroach on that corridor, and then we put a trail along it so that people can walk the whole watershed on the trail.

I thought that was pretty impressive; if you look at some of the projects that we were up against all throughout the country, to think that we in Lenexa would be able to go head to head with any city in the country, we felt pretty proud of that.

The whole south side of the lake is a preserved area, so there’s never going to be any development, even park kind of development. The only thing that’s allowed through that property is a soft-surface trail so people can go out there and they can really get away and enjoy the nature up there.

We have to talk about the spillway. Everything in the spillway has a meaning. It’s actually a piece of art. It replicates the water cycle in Kansas.

So where the water comes out of the lake, that area, it’s called an ogee spillway. And that’s a kind of spillway that has a curve to the top, rather than some spillways that have a sharp edge. We chose that curve because it’s soft and it replicates the clouds, so it’s as if the water is coming out of the clouds when it goes over the spillway.

And then as you look farther into the spillway, you see kind of cyclic patterns, which replicate a Kansas cyclone, kind of a big storm. So the water comes out of the clouds, it circulates with this big storm, and then as you go farther through the spillway, you’ll notice spikes and teeth, and these actually represent the filters that nature puts out to help filter the water as it comes, engages the land, and goes through a river, which you can see also in the spillway, a little river.

And ultimately, it drops about 20 feet straight down into what looks like a cup, so what we’ve taken is water from the storm, we’ve cleaned it, and we now drop it into a cup for people to use. That’s how clean the water is — no, it’s not really that clean (laughs) but you get the idea. ‘Cause this water actually does go to the Kansas River, which is an intake for Olathe Water, so in a sense, you do drink this water.

It is awesome. I just love the natural part of it. Staff works hard trying to maintain the native vegetation. We’ve got some great pictures of burns we do in the fall through here.

And then walking up the stream corridors, looking at the healthy streams and the healthy wetlands that we have. That’s what really gets it for me, is just looking at a healthy environment that we’ve helped create.