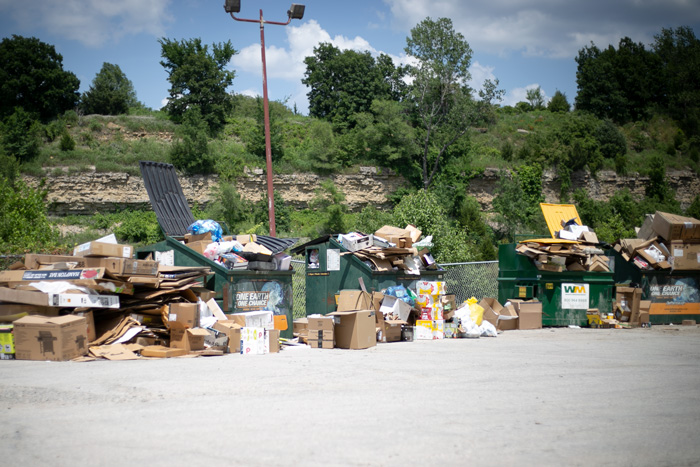 After an hour of deliberation, the Lenexa City Council on Tuesday voted 5-2 to allow trash haulers in the city to offer curbside recycling pickup every other week instead of weekly.

The crux behind Tuesday’s discussion was city staff’s and councilmembers’ concerns over balancing the needs of residents for affordable and frequent recycling services with the needs of trash haulers, who say they want to maintain a viable, profitable operation.

“This should be a lot easier to figure out,” said Councilmember Corey Hunt, noting that Lenexa’s growing population generally supports recycling efforts. “I think it’s a good idea to at least offer the option for both.”

“We have to make these decisions and prepare our residents for what could happen, and give them the most options available, I think,” Hunt added.

“It’s been a corporate goal of ours since the ‘80s to do weekly recycling,” Nicks said. “We’ve raised a whole generation to recycle, now that generation’s raising their kids to recycle. It’s second nature to them, just like seatbelts. I don’t think we should take a step back.”

“My gut feeling is we absolutely need to set an example and require weekly hauling,” she said. “I’m very torn with this because I get it. I feel really passionate about setting an example and teaching that this is important.”

In a presentation to the city council, MacKenzie Harvison, deputy city attorney, said staff’s recommendation to allow every-other-week recycling pickup services would protect residents’ desire for frequent pickups as well as allow some flexibility for licensed trash haulers who face difficulties in the recycling market.

Waste Management, the trash hauler who owns and operates the Johnson County landfill in Shawnee, made the request for the city to allow every-other-week recycling pickup.

The company said it is rolling out larger recycling bins to compensate for less frequent pickups.

In December 2020, the company reported that weekly pickups are too costly and unsustainable and are also too frequent for some customers whose recycling bins are either not completely full or not put out for emptying.

Offering every-other-week would be a cost savings for Waste Management by reallocating labor and transportation toward other needs, the company said.

Curbside recycling pickup rates are going up either way.

City staff noted that Waste Management is planning to increase recycling curbside pickup rates for residents, although it’s unknown how much.

“I just want to say that, after looking at this for months, it’s just clear to me that the recycling market is facing an incredibly stressful time,” Harvison said. “And I don’t say that to benefit any particular outcome here, I just think it’s a fact that’s worthy of consideration as we make these decisions.”

Harvison summarized Waste Management’s concerns, saying contamination rates — that is, the amount of non-recyclable material that ends up in recyling bins — remains too high, making the company’s processing more expensive.

That coupled with a shrinking market to sell recycled materials is making it less economically viable overall.

In fact, five trash haulers licensed to operate in Lenexa told the city they’ve experienced “significant difficulties” in the recycling market in the past couple of years, such as increased costs to process recycled materials, depressed values of the materials and contamination.

“I am concerned, given business dynamics, that we may go from weekly to bi-weekly options to nothing,” said Councilmember Dan Roh. “I think that is the potential if the marketplace doesn’t shift a little bit.”

Councilmember Tom Nolte said this discussion “opens up a can of worms” for him, particularly with unknowns like how much recycling pickup rates could increase, and where exactly recycled materials end up, especially when they’re contaminated.

Meanwhile, almost 2,400 Lenexa residents participated in a city survey on the issue.

Among the findings, city staff said that just over half of residents said every-other-week recycling pickup would fail to meet their household needs, perhaps being tempted to throw recycled materials in the trash when their bins overflow.

Nearly half of respondents also said they were unwilling to pay more for recycling pickup.

Lenexa resident Joe Quinn, who spoke Tuesday’s meeting, said he and several residents in the Greystone Estates neighborhood oppose the change to every-other-week service and want to keep recycling services as they are.