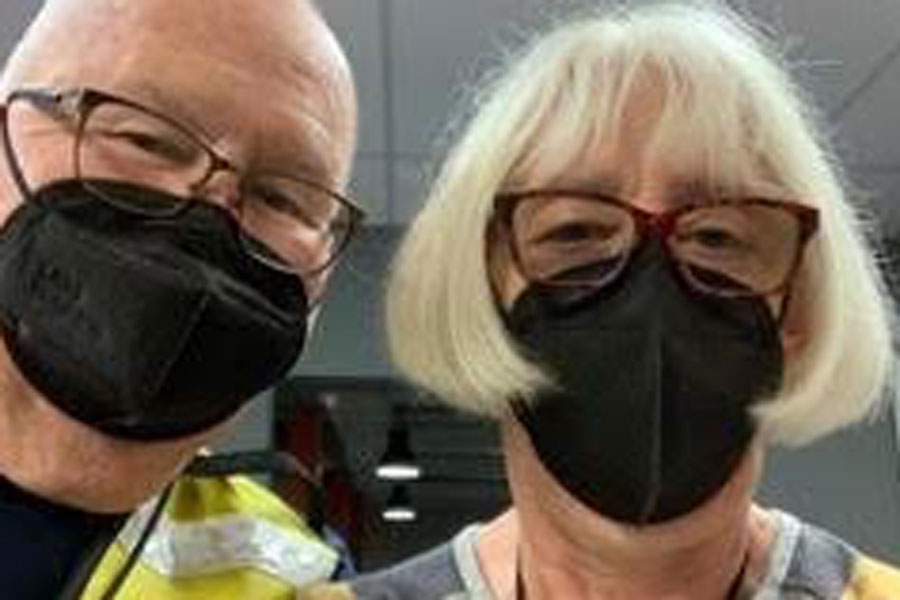 Bill and Debbie Carmody were active volunteers before the pandemic struck last year, and they jumped at an opportunity to volunteer at the county's mass vaccine sites. In the past few months, they've worked at 15 clinics, helping usher an estimated 15,000 people through to get vaccinated. Photo courtesy the Carmodys.

Bill and Debbie Carmody were pretty active volunteers in the Johnson County area before the pandemic, but those opportunities dried up when COVID-19 limited in-person activities.

“We were kind of anxious to find something that we could do volunteer-wise that would be helpful,” Bill said.

So when the volunteer coordinator at the Johnson County Library — where he frequently volunteered before the pandemic — sent out an email looking for volunteers for the Johnson County Department of Health and Environment’s mass vaccine clinics this past winter, the pair signed up immediately.

“I know it sounds a little bit romantic, but I wanted to be part of a legitimate war effort against the [virus],” Debbie said. “I just felt like it was something that I needed to do for other people.”

Volunteering at the clinics, the Carmodys said, is something they can do to help protect others from the virus that’s impacted so many people.

“It’s really important to get as many people vaccinated as possible, just so they can live their lives,” Bill said.

Without medical backgrounds, they don’t personally administer shots, but they help out on the logistical side of things.

Bill said that could be helping direct traffic inside or outside a clinic, manning paperwork tables or helping people exit the facility. That usually means they’re wearing yellow vests, which are reserved for volunteers like themselves.

At each clinic, they said they try to be reassuring to people they interact with.

Debbie Carmody said most of the people who come to the clinics to get their vaccine are eager to get the shot, even if they are nervous.

Sometimes, Debbie says she will even do a “happy dance” or celebrate with the people after they’ve received their vaccine.

The feeling of relief is something Debbie said she can relate to. Both Bill and Debbie received their vaccines while volunteering.

“The freedom and the relief that they have when they get that second dose, it just washed over me. I didn’t expect it and then I got home and I thought, ‘Oh my gosh, I’m free,’” she said. “It’s a wonderful feeling. I would want that for other people.”

In general, Bill said the vaccination process at the clinics they’ve worked has been quick and easy. All told, it probably takes people 25 minutes to get through, and that’s including the 15 minute wait time post-vaccine.

The very first mass clinic JCDHE ran at Okun Fieldhouse in Shawnee in January was plagued by operational issues that left hundreds of seniors waiting in long lines outside in freezing temperatures. But the county quickly adjusted their procedures and there have been no widespread problems reported since.

So far, about 42% of the county’s 16 and older population is fully vaccinated, according to the county’s vaccine dashboard.

County health officials said walk-ins to the county’s mass clinic had slowed, with a total of less than 450 vaccines administered on some days last week. But once children became eligible, vaccinations shot up to more than 1,000 a day this week.

As of last week, the Carmodys had both volunteered at 15 clinics, seeing more than 15,000 people coming through clinics at both Okun Fieldhouse and the more permanent vaccination site in Lenexa.

Bill and Debbie said they plan to keep volunteering at the JCDHE clinics as long as they’re needed. 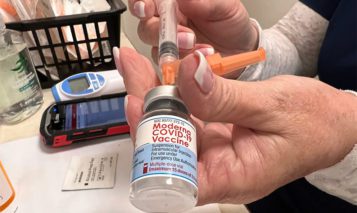