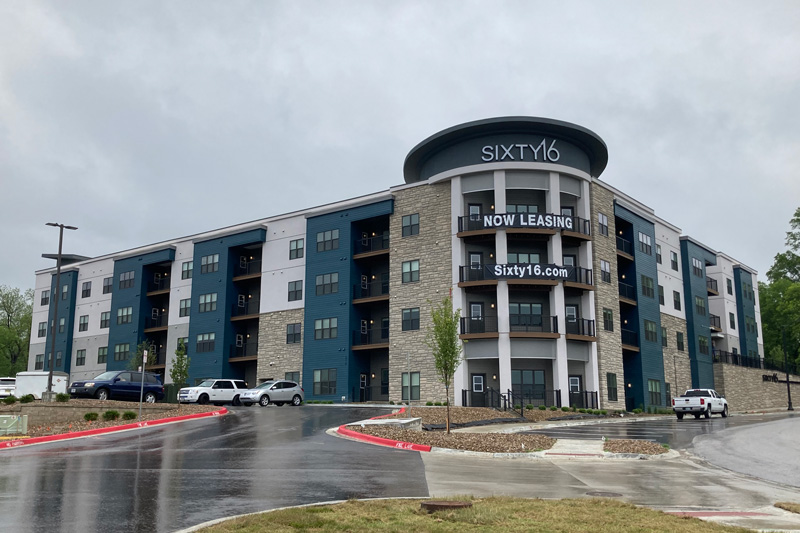 Sixty16 apartments is open and accepting new leases in downtown Shawnee. Developer Kevin Tubbesing intends for the residents to enjoy the downtown core, which is becoming a revitalized, walkable destination, he says.

Sixty16, a new apartment complex in downtown Shawnee, opened May 1 and is now accepting tenants.

Located on roughly two acres at 6016 Roger Road behind Old Shawnee Pizza, Sixty16 has been in the making for multiple years as local developer Kevin Tubbesing along with Mission-based firm Stag Commercial laid out a project that they hoped would bring more density to Shawnee’s downtown core.

The $14 million project has access to up to $3.1 million in tax increment financing.

Tubbesing said the public financing was necessary to help overcome “extraordinary costs” of purchasing and preparing six lots, tearing down four homes, grading for the building’s foundation and preparing infrastructure before they could go vertical.

With a total of 67 studio, one-bedroom and two-bedroom units in a three-story building, Sixty16 apartments is currently about 20% full.

At least four units are already set up for ADA accessibility, while all units can be converted to be fully accessible for federal standards, Tubbesing said.

The ground floor on the west side has six units with their own street address and external entrance, functioning similarly to condos.

Sixty16 features a 16,000-square-foot garden and courtyard area, a water feature, and a gazebo for community movies and sports events, as well as tables and other outdoor seating next to a few barbecue grills and serving bar.

“We are a building that was designed to be a great place to live,” Tubbesing said. “And I know that might sound a little corny, but we have the largest garden of any apartment complex in Kansas City.”

The apartment units range from about 670 to about 1,300 square feet.

Tubbesing noted that the studios are fairly large for new studio apartments in the Kansas City metro, but still fell below Shawnee’s requirements, which he considered to be out-of-date with market standards.

The building also has a fitness room and dog wash, as well as carports for two-thirds of the units.